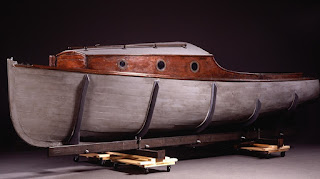 Last week before I got sick I went to a lecture that was spellbinding and mesmerizing---yes, there is a difference---and at several points it had the hair on my arms standing right up. That was a common reaction. I’ve been going to the Life Enrichment Lecture series at the senior hall for many years and this was only the second one where the speaker got a standing ovation. What was it about? It was titled “When Good People Do Something” and it was an uplifting account of what the people of Denmark did during WWII to save 98% of its Jewish population (7,200 people in all) from being rounded up by the occupying Nazis. The speaker was a professional storyteller and a Professor of Humanities at Lawrence Technological University, born in the Bronx and was great at doing accents. She took us through the steps the Danish people did spontaneously when they got wind of the fact that the Nazis were planning to raid the synagogues on Rosh Hashanah, the Jewish New Year, and send all the worshipers to concentration camps.

With less than 24 hours’ notice, gentiles and Jews alike sprang into action. They passed the warning around not to go to the synagogues and to find places to hide away from their homes. Strangers and neighbors took people in to their homes to hide, businessman provided money to help them flee the country and hospital workers helped sedate Jewish children so they could be hidden in fishing boats for an impromptu boat lift to take the Jewish people off the peninsula that was Denmark to neutral Sweden where they could apply for political asylum. Only 500 of Denmark’s nearly 8,000 Jewish population were rounded up by the Gestapo and deported to Theresienadt concentration camp. By far, the most successful Resistance Operation in all of Europe.

Denmark was important to Hitler because it was his breadbasket to feed his troops. Along with its rich fishing industry they also had some of the best boat builders in the world and Germany brought all their ships to their ports for repair. The Resistances repaired them in such a way that they’d break down again out at sea. The lecturer read some words written by the King of Denmark in late 1930s about Adolph Hitler and they were the same words we often hear used to describe Donald Trump. She snuck that quote in so fast and kept right going to another antidote that it had everyone looking at each other, wondering if we just heard what we heard.

When good people do something. Christian churches hide artifacts from the synagogues until the end of the war and when the Jewish people were able to come back to Denmark two years later they found their houses just as they left them only they’d been cleaned, the cupboards stocked with food and fresh flowers were on the tables. But the Danish people were not the only ones who did courageous things during those dark days. Historians speculate that the person who spilled the beans about the planned raid was a high ranking German in charge of occupied Denmark who had lived there long enough to learn to love the country. Another high ranking German, historians believe, let his humanity show when he pulled most of the Germany patrol boats off the waters to “paint” during the month while the boat lift was in full operation and that added to their evacuation success.

The lecturer, Corine Stavish, ended her talk with these words: “People were presented with a clear choice between good and evil and they choose ‘good.’” She’s active at National Storytelling Festivals and, if you get a chance to hear her talk, go. She’s witty and poignant and she knows how to make history come alive.

Switching Gears: Let’s talk knitting. The sweater and vest below are my last projects of the 2018/19 winter. I have to put my knitting needles and yarn away because it gets too hot and sticky to knit in the summer. The lady bug sweater is for my youngest niece’s cottage where her grandkids often need a sweater on cool summer evenings on their pontoon. The vest is for my oldest niece’s grandson who loves wearing vests, and he loves his grandpa’s John Deere tractor.

My mom used to make graphic pictures on sweaters but the tractor was my first attempt. She also used to make entire sweaters with patterns like on the lady bug sweater’s front panels only fancier and with more colors. With the vest I learned how to use yarn bobbins---at one time there were nine bobbins hanging down the back of the tractor---and I can see how they can take the frustration out of those Scandinavian designs. I may try another next winter. Anyway, good-bye knitting and hello eBay. May is here! © 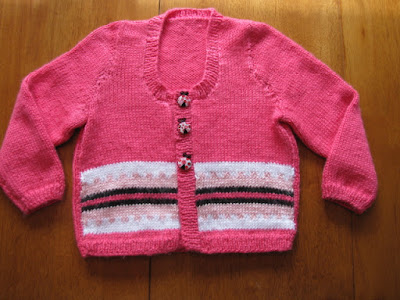 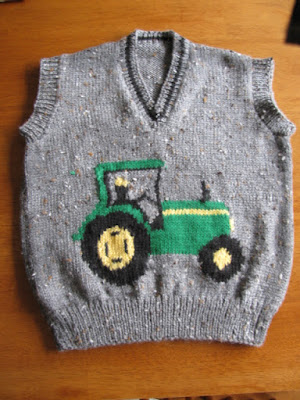 NOTE: Photo at top is from the Danish Jewish Museum and shows one of the fishing boats used to smuggle people to Sweden. Can you imagine how many trips it would take to get 7,200 people across the bay to Sweden? Our speaker said someone tried to burn that musuem down recently but they saved it.
Posted by Misadventures of Widowhood at 12:30 AM