This Too Shall Pass but Can we Get a Confirmation on That? 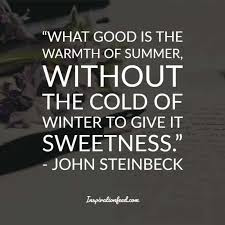 I’m not sure I can do this anymore. And to make matters worse, I don’t even know what “this” is that I want to stop doing. The pandemic? The loneliness it brings with it? The constant focus on moving related activities? The worrying about the direction our country is going in? The pandemic related weight I’ve gained? The guilt of reading too much thus avoiding other things I should be doing? One thing I am sure of is that I’ve entered into another winter of discontent and by “winter” I’m using the word metaphorically and not referring to the season fast approaching my part of the world.

“When a condition or a problem becomes too great, humans have the protection of not thinking about it. But it goes inward and minces up with a lot of other things already there and what comes out is discontent and uneasiness, guilt and a compulsion to get something--anything--before it is all gone.”

The Winter of Our Discontent

I’ve always loved John Steinbeck’s title, The Winter of Our Discontent. It rolls off your tongue so smoothly and paints an image of bleakness with so little effort. But I don’t like the feeling of living in a winter of discontent. I’ve been restless lately and when I’m feeling this way I ramble-write, not knowing where I’m going to end up but hoping it leads to clarity. And ramble writing usually leads me to rereading a favorite John Steinbeck quote from In Awe of Words: “A writer out of loneliness is trying to communicate like a distant star sending signals. He isn’t telling or teaching or ordering. Rather he seeks to establish a relationship of meaning, of feeling, of observing. We are lonesome animals. We spend all life trying to be less lonesome. One of our ancient methods is to tell a story begging the listener to say—and to feel—‘Yes, that’s the way it is, or at least that’s the way I feel it. You’re not as alone as you thought.’”

Steinbeck wasn’t the first to write about the winter of discontent. I’ve never studied Shakespeare but it doesn’t take much research into Steinbeck’s book title to run across a play of Shakespeare’s that starts out: “Now is the winter of our discontent made glorious summer by this son of York…” spoken by Richard, the future king who was not complaining, as I’ve been doing here, but was rather celebrating the turning point in his family’s fortune. In Steinbeck’s novel, however, the turning point was the opposite---of a family who was once great and went broke thus giving the main character a plot purpose to regain the family riches, power and influence. But the bare bones theme of the book, according to one reviewer, is it's about “the effect of societal pressure.” Geez! There's no maybe about it, that’s the cause of my discontentment right now i.e. there is so much social pressure to do this or don’t do that or to embrace this and reject that. I hate when the world around me seems to view everything in blacks and whites with no grey nuances in between. That's the kind of social pressures that makes my head spin.

“You know how advice is. You only want it if it agrees with what you wanted to do anyway.”

The Winter of Our Discontent

I’ve always loved living in an area of the world where our seasons are so clearly defined. With our winters comes both gentle and harsh storms followed by blinding white beauty blanketing the earth. Our springs warm the earth bringing forth the fragrant flowers and the return of plump robins. Our green, sultry summers with their long, lazy days are followed by cooler falls that turns the landscape into a blazing, artist's palette. A season that after the colors have detached from the trees gives way to brown, bare-bones visas waiting to start the cycle all over again. As humans we adapt. We fail and start over again. We grow stronger again. I may be in another winter of discontentment, but I’ve been here before and fortunately (or unfortunately) this time I’m not alone. The pandemic and the political climate has made strange bedfellows out of a lot of us. No matter who we voted for yesterday we are all deeply invested in the outcome of the election. God help us all if we can't come together when the dust settles, if our winter of discontent turns into a decade of discontent. Fingers crossed that doesn't happen.  ©