My House is Up for Sale! 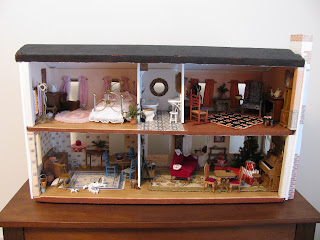 Do you have any idea how hard it is to hang two pairs of drapes all by yourself? It took me forever and an hour of working with a flashlight, a pair of twisters, tiny O-rings, toothpicks and the best outdoor glue on the planet. Did I mention the drapes were in the bedroom and parlor of my childhood dollhouse? On the spur of the moment I decided if I have half a chance of selling that house it was the ideal time to get it listed on Facebook’s Market Place---just before Christmas and when parents of a little girl might be looking for ways to entertain her during a pandemic and the long winter ahead. The house was built from plans that appeared in a magazine the year Gone with the Wind was a box office success. The porch looks vaguely like Tara from the movie but that’s where the similarity ended. Evidentially that movie inspired a lot dollhouse companies to put out southern style plantation houses. My mom bought my house used at The Salvation Army Store and I got it for Christmas circa 1947. I found the magazine article with the plans on a serendipitous trip to an antique mall in the '90s while looking for gas station advertisements in a magazine vendor's booth. Can you believe that!

Back in the ‘70s when every female over the age of 30 who was also an aficionado of all things Hobby Lobby were building dollhouses and shadowbox rooms, I did some extensive redecorating in my childhood dollhouse. I wallpapered, put down new flooring and built a ton of furniture from kits, made draperies and linens. My mom crocheted tiny bonnets for a coat rack and throw rugs for the floors and doilies for the living room. I also bought a lighting kit and woodwork to cover up the wiring but it never got installed because, well, that was about the time when I got distracted by more grown up things. (Use your imagination.) I also never got the outside siding hung and I’m glad I didn’t because over the years I’ve gotten sentimental over seeing the original stenciled shrubbery and shutters and I'm glad they didn't get covered over because they were exactly like the stencils in the magazine to help date the house. All but one stained glass window panes are still waiting to be installed. The brick that I did manage to put on the chimney and front porch got so sun faded since the remodel that they’ll have to be done over. Yes, I had to list my dollhouse as fixer upper.

I have lots of little great-grand nieces---three living in the same house---and I'd love to give the dollhouse to them but they are still toddlers and this is not a toddler kind of house. It’s still an option if I can’t sell the house on Facebook’s Market Place but it would be a pain to get it out to the boondocks two counties away where my great-grand nieces live because the dollhouse won’t fit in my car. (I think I just coined a new phrase---great-grand nieces. What do you call the children of your nephew’s son?) Whatever I end up doing with house, it was fun playing with it again as I sorted through all the accessories and supplies that go with it. I fell in love with the tiny light fixtures all over again, and it reminded me of a conversation where I tried to talk my brother into wiring the dollhouse since he was an electrician. If I wasn’t in a serious downsizing mode I could easily be inspired to do another makeover, the 2020 edition. But I am downsizing and I don't have the finger dexterity that I had back before time and my aging body left a lot of hobbies I used to enjoy behind in the dust. I even found a kit to make a wicker chair and table for the porch when I unpacked all the stuff. No way could my old fingers weave that furniture together!

On my real house I’m poking along on my ‘To Do’ list of things to do before I sell it. I just picked up two window screens from the window repair place. $52 spent because the dog loves to use those screens like a doorbell when he’s out on the deck. They were replaced twice before since the little bugger was adopted nearly 13 years ago. The newly replaced screens are not going up on the windows any time soon, just sayin. Back in the day when I had a house full of wooden framed screens I replaced the screens on fourteen windows all by myself and I’ll bet I didn’t pay $52 total. It was easy work with the right tool, not sure I could do my own screen replacements today.

Writing about Levi costing me money reminded me of a dog I had back when my husband was alive and first started plowing snow in the winters---this was before I learned how to plow and had my own truck. Don would often beg me and Jason the Macho Poodle to ride along to help keep him awake. Those two had a real bromance going on and Don didn’t like going anyway without that dog tagging along. For some crazy reason Don started a piggybank for Jason and would pay him a quarter every time he rode along when Don was, himself, earning money with his truck. And the dog would give quarters back to Don, taped in greeting cards on Father’s Day and his birthday. Me? Did he pay me to ride along? No…but Don did buy me breakfast in the mornings when we’d finish getting all the snow off the parking lots. My love for the Guy-Land Cafeteria goes way back to that era of my life in the ‘70s and I’m glad the local chain has a branch down near where I’ll be living this time next year. I'm hoping it will be my happy place to write like the one near-by as been for the past decade plus. © 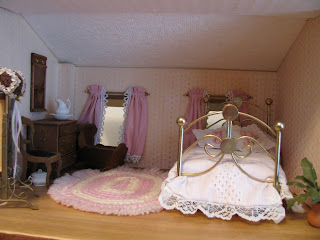 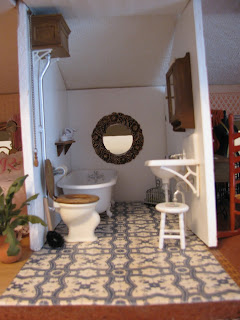 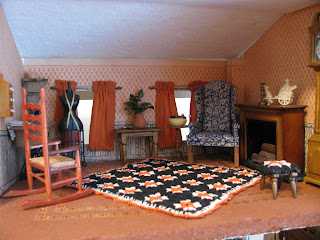 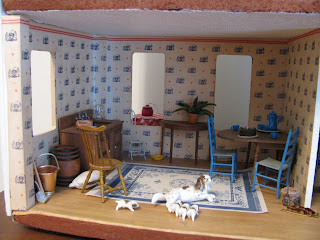 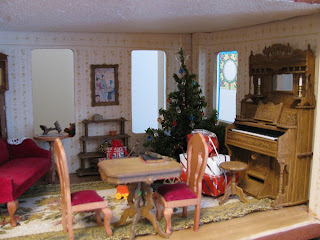 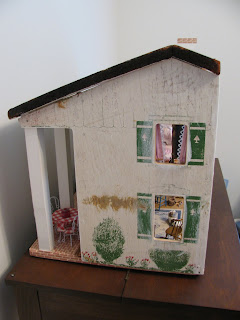 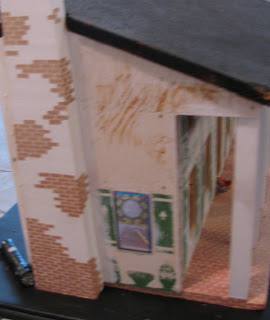 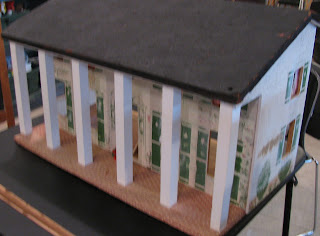 Edit to add: The house sold with only a half day listing. And like real houses in today's market I could have had a bidding war if I had been smarter about it. Interest was very high---12 people wanted it in the first two hours---and I didn't know people made offers on Market Place listings. After I accepted the first offer of $125 someone else offered $150 but a deal is a deal so I turned down the latter offer in lieu of keeping my word. Two girls ages 8 and 12 will be getting it for Christmas and they are at a good age for it. Not so young that they'll break the fragile, tiny stuff. The couple who picked it up were excited, and full of ideas to redo the outside including adding brick pavers and real shutters. I was excited just listening to them. Woman said she was honored to have the house and will take good care of it and will send me photos when they get it done. It was surprisingly easy to let go of because I worried about it going to the right home and I think it did. The parents are going to order all the stuff needed for the renovations so after Christmas they can all work on shingling the roof, brick pavers and siding. I gave them a miniature miter saw to make their job easier. How coo is that!