Veterans in Hats and Bare-Headed Widows 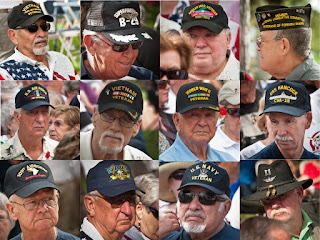 I take myself out to lunch quite often in good driving months and this week was no exception. Often I’m struck by how many older guys I run across who are wearing baseball hats proclaiming that they are veterans and if you could hear the jumble of thoughts going through my head when I see them, you’d probably be shocked. I get the whole proud to have served thing and how the hat elicits strangers to say, “thank you for your service” and how veterans often stop one another to compare service stats but it also makes me sad and stirs up thoughts I’d rather not have. And I wonder how many of these guys are letting their hats proclaim that their few years in the service were the most significant thing that happened in their entire lives. Do you think I’m being unpatriotic or anti-military or disrespectful to question the message a person’s head gear is expressing?

The sad truth is for many veterans of the Vietnam War it was the most significant and life changing thing they went through in their roughly 60+ years of living. The controversies surrounding the war and the dismissive way our servicemen were treated for many years was different than after previous wars. At least in this country. After WWII the French had collective amnesia about their own dark history. Exhibit A of many: The Vél d'Hiv Roundup when the French police did Hitler’s bidding and rounded up their own countrymen---thousands of Jewish people living in Paris including nearly 4,000 children and shipped them off to Auschwitz. The children were separated from their parents before they got on the trains and when the children got to Auschwitz they were marched directly to the ovens. It happened in July of 1942 and it took until 1995 for the country to officially acknowledge the part France played in delivering so many of their own citizens to their deaths.

I suppose the reason the veteran hats bother me is because they remind me that I can’t live in a bubble where everything is a Disney movie. Letting it go when we should never forget might work for many things but not when it comes to the atrocities that follow on the heels of unfettered hate. In our current political climate it's easy to see how intolerance can creep into public policies that, in turn, could lead to unspeakable acts. I guess that’s one of the good things about old men wearing veteran hats, they remind us not forget those who fought for---hopefully----noble causes. Admittedly, the line between noble causes and self-serving lust for power were clearer during the Civil War, WWI and WWII. Not so much with the Vietnam War. We were lied to. We trusted our leaders and our returning servicemen paid a price for those lies.

I’ve never thanked a veteran for his service. Why can’t I bring myself to do that? I see others do it and it seems so easy-peasy for them---like a greeting and a handshake. Hello, nice to meet you. Have a nice day. I can’t presume to know what that hat represents to the person wearing it or to the person doing the thanking. Maybe I’d presume too much, maybe not enough. A military hat is not a like college t-shirt on a forty year old, balding guy where you can safely guess the shirt presents a carefree time in his life when he had time to play sports and flirt with the campus cutie pies. It’s not like a hat from a concert or a souvenir hat from a place where you left your heart and half the money in your wallet.

My husband had a large collection of hats with logos and t-shirts with sayings on the front. It was a big deal every morning to decide what mood he was in when he picked out his fashion choices, especially after his stroke when he couldn’t communicate in other ways. But reading a person’s mood by the messages on his clothing never worked with a friend of ours who, when asked about the logo on his shirt replied, “I don’t know what it is. I buy cheap shirts at the Salvation Army so I can throw them out when they get too grubby to wear.”

I’ve often wondered what message I’d want to wear on a hat, if I could design one that sums up the most significant thing that happened in my entire life. Sexual abused as a toddler, rape survivor later on? No, those things happened to me but they never defined me. Same goes for surviving the death of my parents and husband. Those things helped make me stronger, but they don’t define me either. Caregiver to a stroke survivor? Now, if I could figure out how to put that on a hat that might work. I stepped up to the plate to care for my severely disabled husband in a way that gave him the best quality of life anyone could have under the circumstances and I am proud of those twelve and a half years. If all that would fit on a hat, I’d no longer be a bare-headed widow. ©
Posted by Misadventures of Widowhood at 12:12 AM