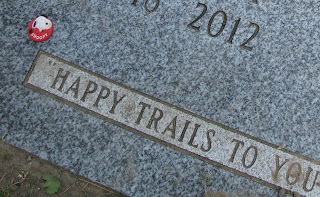 It was a bright, sunny day in the neighborhood when I got up and I had places to go and things to do including going to the cemetery to do some “housekeeping” around my husband’s gravestone before the Memorial Day weekend kicked into high gear. But first I needed to drop off my recycling at the transfer station what’s located along the way. I’ve been on a militant mission to recycle as much one-time use plastic, glass and metal as humanly possible. My recycling “come to Jesus” moment came after I posted the video back in April of a sea turtle with a plastic straw stuck all the way up inside his nose. I’ve always recycled newspapers, cardboard and pop cans but I didn’t think I was generating enough kitchen and household recyclables to make a difference. Boy, was I wrong. Before, I was going to the transfer station every 8-9 weeks but now I’ll probably need to go every 2-3 weeks and I’ve reduced the trash that goes out to the street for Monday pickup so much that it looks absolutely ridiculous in a tote big enough to hold 332.5 pounds. I’ve called around looking for a trash pickup service that offers smaller containers or once a month, rather than weekly pickups but they all seem to be using the same play book.

The cemetery was a busy place. Mowers and guys with weed whackers were working on the far side of the rolling, tree studded place and Boy Scouts were making their way down the rows of stones, looking for graves to put fresh American flags on. After I parked off to the side, careful not to encroach on any gravesites, I grabbed my long-handled shovel, a jug of water, scrub brush, plastic bag and garden gloves and I was surprised to see the tombstone looked better than it usually does when I do the spring the cleanup. Usually sod is attempting to take it over and the engraving in the marble is filled up with dirt. Others like me were parked here and there and as we worked the bees were buzzing, the birds were singing and the flowers were holding their faces up to the sun. A perfect day to be anywhere but where I was.

As I dug out the sod around the stone I thought about what I wrote in my blog last year---I had looked it up the night before. “This year,” it read, “is my fifth Memorial Day since Don’s passing and I could write exactly what I wrote last year: ‘I went to the cemetery on Saturday and had a talk with Don. I told him that I think of him often and that I’m doing okay even though he took a piece of me with him when he left.’” This weekend, my sixth Memorial Day of grooming his gravestone we didn’t seem to be on speaking terms and that may be because I had a half of jug of water left and I got side-tracked cleaning up a near-by grave of a veteran of the Korean War that looked pitiful and abandoned. I almost cleaned it along with Don’s last year but decided not to because I had just read another widow’s blog who had gone ballistic when she went to the cemetery to clean her husband’s grave and found it had already been done. She suspected his first wife did it and she was going to have a showdown over it. Dead and fighting over who gets to clean up after the guy! He must have been quite the prize. Anyway, I’m thinking if Don’s Korean War vet neighbor in the cemetery has a living widow around, I could take her down in a fist fight.

On the way home from the cemetery I got caught in a road construction maze. The street I usually go home on had been closed off permanently and the traffic light that used to be at that intersection was moved 200 feet down the road, at the exit ramp coming from the expressway. It’s not like we didn’t have a month of warnings. We did, but old habits are hard to break and thank goodness I didn’t make a left onto the exit ramp. (Someone's going to do it!) Turning around in the carpool lot so I could head back in the other direction, I found the brand new by-pass road that eventually connected to the road I needed. But on that road I ran into road block and had to turn around. AGAIN! I didn’t think I’d ever find my way home and I was running out of options. I ended up going way far out of my way but all’s well that ends well because that road took me to Starbucks and my Chevy Trax is programed to turn into their driveway.

As I jotted down notes for this blog entry I was sitting in their coffee shop, using the stainless steel straw I now carry in my purse---that’s how serious I am about doing my part to reduce was goes into the landfills and oceans. It was my first “granda Teavana shaken pineapple white ice tea lemonade sweeten infusion” of the season. They don’t tell you this, but ordering drinks at Starbucks is a senility test. If you get any one of those words out of order you have to start all over again. ©
Posted by Misadventures of Widowhood at 12:30 AM