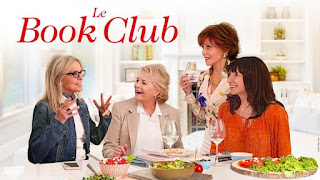 The movie review at rogerebert.com starts like this: “When I learned that Book Club was Hollywood’s latest bid to please the senior-discount demo with a glittering array of big-screen notables of a certain age was partly inspired by the Fifty Shades of Grey trilogy—aka The Joy of Sex for semi-literates—I shuddered a bit. Please, don’t waste the estimable talents of Jane Fonda, Diane Keaton, Candice Bergen and Mary Steenburgen, all acting together for the very first time, on kinky cosplay.” Have you ever googled a word like “cosplay” and after reading what pops up you still don’t have a clear picture of what the person who used it was trying to say? Understand it or not I’m using the quote above to supplement how IMDb sums up the storyline of the film: “Four lifelong friends have their lives forever changed after reading Fifty Shades of Grey in their monthly book club.”

Each character supposedly “represents a romantic stage of older womanhood,” but I personally don’t known any wealthy women who have never married---Fonda’s part---who has an active sex life but never gets emotionally involved with any of her sex partners. When she hands out the ‘Fifty Shades’ books she picked for the group to read one of the ladies said, “Give me a break. I’m not reading that!” and another says, “To even be holding this book is embarrassing." I’ve never known a federal judge either---Bergen’s part. She plays a divorced woman who hasn’t been interesting in dating (or sex) in nearly two decades. At one point in the movie she says could put Christian Grey “in jail for any one of those things” he did to Ana in the book. Steenburgen plays a married woman who hasn't has sex in six months. Keaton plays a widow one year out who is being pressured to move into a ‘senior-safe’ basement suite at her daughter’s house. And one of the best lines in the movie came when she told her daughters “you both seem to have good mothering instincts but you should save it for your children.”

You can’t have love and romance in a movie without men---well, you could but not in this storyline---and they paired Fonda with Don Johnson and Bergen with Richard Dreyfuss. Steeburgen’s husband was played by Craig Nelson and I saved the best for last, Keaton was paired with Andy Garcia. All six of us who saw the movie together left the theater in love with Andy’s character. He and Johnson provided the required silver-fox eye candy for this old hen flick. (Old hen as opposed to chick flick. Not funny? Sue me.) The casting director‘s choice of Don was an interesting pick considering his daughter, Dakota Johnson, played the lead in the Fifty Shades of Grey trilogy. In an interview he said he didn’t see the movies because “there are some images that shouldn’t be in a father’s head.” Good choice, Don.

I don’t know how the opening weekend box office sales were but judging by the fact that I could have seen Book Club with three separate groups, I’m guessing they were good. My senior hall Movie and Lunch club chose it but I only went to lunch with the fifteen in that group. My Red Hat Society chapter threw in an extra outing for May just to see the movie and that doesn’t happen often. I went with my Gathering Girls group. We laughed. Two of us cried. And all of us had a fabulous time and several of us---including me---want to see Book Club again because there was so much dialogue that got lost in the laughter at the theater.

As a feminist I had mixed feelings about seeing a movie that piggybacked on the popularity of the ‘Fifty Shades’ books and movies. I even wrote a blog in 2015 about how I think the mainstreaming of sadism and masochism is a dangerous message to send to the young women and men. Last February the first movie came on late night TV and I decided I’d bitched about the so-called “erotic romance” enough that I should see if my impression that hard core S&M and grooming for such was being passed off as romantic foreplay matched up with what was actually in the film. It did. S&M should stay in The Encyclopedia of Abnormal Human Behavior Encyclopedia where I first learned about it decades ago. When I was telling one of the Gathering Girls pals about my skepticism about seeing Book Club she said, “We don’t know how the material is handled in THIS movie.” That was a good point and reason enough for me to give up my qualms about paying money for something that might elevate the ‘Fifty Shades’ mind-set.

As it turned out, the characters in Book Club agreed near the end of reading the trilogy that it wasn’t very good even though it did bring changes in each of their lives. (The emotionally unavailable hotel owner opened herself up to being vulnerable. The judge started online dating, the recent widow found her voice and the married couple made their way back to each other.) Although one of the characters said a line about trilogy that rubbed me the wrong way: "It's just a love story that proves even a guy who is fifty shades of fucked up needs love.” If they had left that one line out of the movie my feminist sensibilities would have been happier. It's a dog-whistle to abused women who suckle at the tit of ‘Fifty Shades’ suggesting they should keep loving their abuser instead of leaving.

But the bottom line from my point of view is you don’t have to like the infamous Fifty Shades of Grey books and movies to enjoy a light comedy like Book Club. I sure did. And it definitely wasn't "cosplay"---I finally figured out what the word means. No one dressed up in S&M garb or bought handcuffs or set up a red room with torture devices like Mr. Grey's. The characters were relatable and believable and I loved the way Candice Bergen delivered her nuanced humor. She was my favorite character. If you saw the movie who was your favorite? ©


If you want to read a funny (but long) tongue-in-cheek movie review of the last of the 'Fifty Shades' trilogy movies, I highly recommend one from The Atlantic. Fifty Shades Freed: a Spoilereview