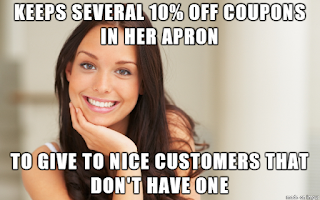 The thermometer read five degrees below zero but the view beyond the deck railing where it hung was so bright with the sun glaring off the pristine snow that I was tempted to put on sunglasses just to look out the window. The sky was stone-washed denim blue, the pine trees standing as still as fence posts in an Andrew Wyeth painting. If I still owned a snowmobile suit I would have been tempted to go outside and make snow angels on the lawn, give the neighbors something to talk about on my sleepy cul-de-sac. Even with the proper outdoor gear and knowing the fridge weather was not people friendly, I probably would have nixed the idea. But I longed to go somewhere. It had been too long since I had a conversation that didn’t include the question, "Do you want a snowpea or a Milk-Bone?"

That was the day our monster storm was due to smack us full on the lips, but it wasn't due to hit until 4:00 and it was barely past noon when I slid into a booth at the Breakfast Only Café, so I wasn’t in a hurry. It was a good thing, too, because the waitress was slow in making her rounds which was easy to forgive considering she had fifteen tables full of people on her side of the place to wait on. If I’d been new to the business I would have thought someone didn’t show up for work on this bitter cold morning, but I knew better. Two waitresses is all they ever have on duty plus two cooks, a busy boy and a cashier. The latter has been known to help out by pouring coffee but she was nowhere in sight. Every time I go there I thank the powers that be for keeping me from ever working in the food industry. Betty Freidan’s The Feminine Mystique did a good job indoctrinating me into believing that pouring coffee for bosses was the root of all workplace evil. I took it a step further in my mind to conclude that serving coffee to anyone was evil if I was the one doing it. Just call me Little Miss. Hospitality.

The waitress has been working at this café at least fifteen years and maybe for the local chain even longer. I used to know her cheating-x-husband-did-her-wrong backstory but I’ve forgotten the details. The owner has several places around town and decades ago we used to go to one on the other end of town. It was the only place around that was open all night and even though half the employees had prison tattoos we always felt safe there because the place was full of cops coming and going. It took the owner getting an award for his prison-out-reach program recently for me to have an 'ah ha moment' that explained why so many of his cooks and busboys sport facial tattoos. Anyway, one night my husband’s nephew was doing a ride-along with our snowplow crew and after finishing our work we were eating at the Breakfast Only Café when the nephew started bemoaning that fact that he couldn’t find a girlfriend.

“What about the waitress?" My husband asked. "She’s pretty nice. Cute too. Why don’t you ask her out?”

His nephew made a point of checking her out then replied, “Nah. Her ankles are too skinny.”

“Her ankles are too skinny? Are you serious?” It took a lot to shock my husband, but that comment did.

“No wonder you can’t find a girlfriend,” my husband shot back, “if you’re going to be that picky!” And for years to come that her-ankles-are-too-skinny line became a joke told every so often by our snowplowers when one of them would get caught checking out a waitress. Although I think ‘ankles’ morphed into a euphemism for ‘breasts’ after a while. It was a ‘70s when guys did things like that without being labeled sexist pigs like they would be today.

Speaking of dogs, Levi my Might Schnauzer has been driving me crazy with the bitter cold temperatures. He’ll beg to go outside then he wants to come right back in, before he’s had time to do his business. Then he’ll want to go out again after he’s had a minute or two to warm up because he still has to pee or poop. In and out, in and out. He’ll even beg at different doors because he thinks the weather might be more to his liking on the other side of the house. He does that in rainy weather too. But on the good side, he’s helping me make my Fitbit steps goal every day which I haven’t been doing since last summer. If you're wondering why I don’t just leave Levi outside until I’m sure he’s accomplished his mission to that I’d say, “I wouldn’t leave child outside in sub-zero temperatures as naked at the day he or she were born either. Why would I do it to the current love of my life?” He's also a nudist who refuses to wear a coat in case also you're wondering why he goes outside without one. It would take two men and a boy to wrestle him into one. ©


When the polar vortex comes to Michigan you might as well have fun with it like this school superintendent and principal did with announcing a school closing 1st and 2nd days. They can sing!