A Man of Strong Opinions

Anyone who knew my husband knows he could be a stubborn and opinionated man. Nothing demonstrates that point more than his relationship with the NRA. He hated that organization with a passion even though he’d been a life member since as far back as I can remember. He remained a member until after his death when I finally wrote and told them to cancel the magazines that have been coming to the house for decades as part of his lifetime, non-refundable membership package. At the time Don became a life member, the NRA was more about riffles, marksmanship and hunting and a whole lot less about political activism as it has evolved into today. And even though each magazine delivered would go immediately in the trash with a few choice swear words, Don wouldn’t let me cancel them because it cost the NRA money to keep him on their mailing list and that was money, Don decided, they couldn’t spend on lobbyists. I’ve often wondered how many other life members of their four million members strong organization felt the same way.

Don’s falling out with the NRA started in earnest back in ‘80s when the organization put up a strong opposition against the Brady Bill regarding background checks for purchasing firearms, and that falling out grew over the years as the NRA got more and more political. The fact that the NRA won’t compromise on keeping high powered assault weapons off the streets of America was something Don despised the most and “screw their second amendment argument!” Reasonable men know that our Founding Fathers never envisioned weapons like we have today. Reasonable men could compromise. Don was a reasonable man…. at least to those of us who knew and loved him.

Being a man of strong opinions was one of the most memorable, frustrating, admired, and endearing qualities of Don’s all rolled into one. You always knew where you stood with him and he enjoyed a good debate. He was well read and rarely forgot anything he’d ever seen, heard or read which made him an interesting person and I used him as my personal, walking encyclopedia. The fact that one of his oldest and dearest friends in this world holds political opinions in direct opposition to what Don held attests to the fact that Don could disagree without being disagreeable. But he also knew when to soften the harshest of his opinions by using humor and he knew when to say nothing if he was talking to someone too militant for a respectful exchange. In the latter case, Don would often take out his checkbook and make a donation to an organization fighting to preserve whatever it was the militant person was ranting against. He worked with a few militant Right-to-Lifer's, for example, so Planned Parenthood got a lot of checks after one of them would lecture Don. If he couldn’t win someone over with words, he’d let his money do the talking.

Some of the organizations who will miss his support include: The Sierra Club, The Southern Poverty Law Center, Doctors Without Borders, The Clinton Foundation, The Humane Society, The Civil Liberties Union, The Alliance for the Separation of Church and State, The Salvation Army, The National Democratic Committee, Planned Parenthood, Habitats for Humanity, the local soup kitchen and mission serving the homeless, The National Organization for Women, and The Brady Center to Prevent Gun Violence. ©

“Everything that irritates us about others can lead us to an understanding of ourselves.”
Carl Jung

“Conflict is inevitable, but combat is optional”.
Max Lucade 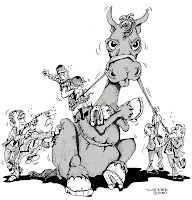 Posted by Misadventures of Widowhood at 4:12 AM