Interring the Ashes at the Grave 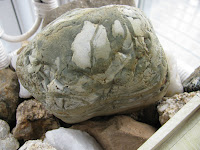 I woke up before the robins this morning with a dream still hanging around in the corners of my mind. I was searching in vain for Don’s phone number because I knew he’d overslept and wouldn’t be able to wake up without my help. My deceased parents were also in the dream and not at all concerned that I couldn’t find the number I was looking for. “Leave him alone,” my mom said, “He’ll be fine.”

It’s not unusual for me to wake up with a fragile dream hanging just out of my reach and sometimes I try to will myself back to sleep so I can finish the work my subconscious mind was doing in the night. But this morning I couldn’t drift back to sleep because I remembered this is the day Don’s ashes get interred at the gravesite---at least most of them. Some I’m taking to Lake Michigan this summer. I’m having trouble fighting the compulsion to divide his remains even more so I can leave some of his ashes at the farm where Don grew up and also take some ashes out during a bad snowstorm and let them go in the wind. (Don loved snowstorms and the plowing that took place after.) I’d also like to put some of his ashes in our backyard, at the house we built together. It’s a place he was immensely proud to live in and the first thing almost every morning that he lived here he’d sing, “Beautiful, beautiful!” to the walls. I can think of a dozen places I’d like to leave part of his ashes and burying them with a headstone is not one of them.

But he wanted to be interned in this cemetery, in the town where he went to school, and where he once spent the summer mowing the grass as a punishment from the local judge. (Kids today are still messing with the city sign but few are as creative as Don and his friends who managed to change some letters around and create a swear word.) Don picked out the gravesite based on the fact that his life-long friends owned the site next to ours. That tickled his sense of humor on one hand, but on the other hand there was something deeply sentimental about his choice. Don was more sentimental than a lot of people would have guessed.

At the cemetery the sexton asked me if I wanted to be at the foot or head of the gravesite because Don’s ashes would be placed at the opposite end and it struck me that these three guys---two sextons and the funeral director---would probably judge our entire marriage dynamics by the answer I gave. I went back and forth trying to figure out a logical choice and finally I decided dead is dead and what difference could it possibly make what I picked or what these strangers thought. They call it widow’s brain when you can’t make decisions and this decision made me feel like a driveling idiot. I did, however, decide quickly that I wanted a rock that the sexton unearthed while digging the hole for the box of ashes. Don and I never took a vacation that we didn’t haul a few rocks back home.

I had the dog in the car and after the ashes were in their final resting place I took Levi down the near-by nature trail and I picked a spot by the river to sit down and reflect on the finality of getting buried in the ground. It was cold and windy with the smell of rain pushing in with the dark clouds over head. No other people were in sight but the sounds of nature were all around me---the trees rubbing against one another, a pair of broad-winged hawks soaring above, the current of the river making its way south---and surprisingly Levi sat quietly watching a chipmunk balling up a dried oak leaf to carry home. If it had been a bird, he would have barked.

I don’t really believe that our dreams are anything more than our own thoughts, memories, fears, and imagination all twisted together and processed in the unmapped parts of our brain. I used to wish our dreams are windows into a parallel universe where we’d all go at night to live. I still believe that great movies like What Dreams May Come (about the hereafter) are born in a person’s nighttime dreams. But today the only thought I had about dreams is this: if there is even the slightest chance that some dreams are spiritual signs from the other side then my mother’s words when I woke up this morning are the greatest comfort I could have asked for at a time like this, that “Don will be fine” where ever he’s at in the great unknown.

Note: The photo above is the rock from Don's gravesite. It measures nearly five inches across and if anyone knows what kind it is will you leave me a note? The photo below shows some of the rocks we've brought home over the years. 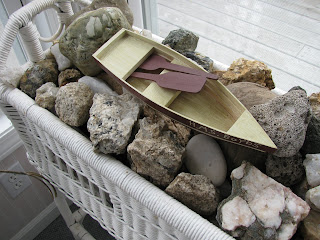 Posted by Misadventures of Widowhood at 6:06 PM