The Rule of Three

For the first time since Don passed away I spent some time at a news and politics message board I used to go every morning to fight/debate. I always considered it to be a good way of keeping my aging brain from turning to mush and at the same time, to do my part to help the causes, elected officials and candidates I care about. What I learned today is I’m not ready for the intensity of a place like that. There are so many mean-spirited people there---always has been but apparently my tolerance level has changed. So now I don’t know what to do with my morning computer time. I can’t take a steady diet of the widowhood site anymore where I’ve been going these past few months.They are so nice and so sympathetic over there and sometimes I just want to analyze the crap out of their policy of telling everyone exactly what they want to hear. But I can’t do that. Who am I to tell anyone else how to grief or move forward? I can hardly figure out where I belong while enjoying my morning coffee. I feel like Goldilocks testing porridge. One bowl is too hot, one is too cold but I can’t find the one that’s just the right.

I guess I still belong in a house where there’s a self imposed TV black out and I suspect that’s because my brain is still too busy processing the repercussions of Don’s death to concentrate on the programs I used to enjoy. I was a bit of a news junkie. But now the world could be falling off its axis and I wouldn’t know it. And I haven’t yet grasped the fact that I can change my routine now that Don’s no longer here. I don’t, for example, have to kill time on the computer in the mornings anymore. I could do something else entirely. That started because Don needed mid-morning naps.

The dog is stuck in a routine too. If I don’t open the library door before I sit down at the computer, he lets me know in no uncertain terms. It’s Levi’s favorite place to sit and watch the street which he’s not allowed to do during the night. The other day I sat in the library chair he uses and Levi got very upset. I tried to explain mortgages and home ownership to him but he threw Squatters Rights back at me and won the argument. No library sitting for me! That was Don and Levi’s domain and I can keep on doing as I’ve always done---go in the library long enough to pick out or return a book then walk back out.

My search for the third bowl of “porridge” (i.e. a website to go to that’s just right) has me thinking about the 'Rule of Three', how it came about in story telling. That’s the principle that says things that come in threes are more effective than in other numbers. Some say the Rule of Three started with the Bible---the Holy Trinity, the three wise men, the three crucifixion crosses, the three Magi gifts---but I wonder if it didn’t evolve from something older and more intrinsic to human nature; sort like a mother-father-and-baby-makes-three symbolism passed down from the ancient world.

The Rule of Three is every where there is written language but most noticeable in fairy tales: Goldilocks and the Three Bears, the Three Little Pigs, Three Blind Mice, etc. Even the Dormouse in Alice in Wonderland talks about his three sisters and Dorothy clicked her heals three times in The Wizard of Oz and Jack---remember Jack? He climbed his beanstalk three times. The examples go on forever. The Rule of Three can even be applied to my widowhood in the sense that I have to work through my past memories and catalog my future options before I can find peace in the present. Oh my God, I’m living in a production of Charles Dickens’ Christmas Carol!

“Jeez!” I can hear my inner voice saying, “Go turn on some music and get that Rule of Three out of your head before it drives you crazy.” But I tell her with my luck Lionel Richie would be singing Three Times a Lady so I might as well stay here and bemoan the fact that the Rule of Three was broken at my house when Don passed away. It’s always been Don, Jean and the dog. We were a family.

“You could buy a puppy sibling for Levi,” my inner voice says.

“You can’t replace Don with a dog!” I snap back at her.

“It was just a suggestion. What would YOU want if you were granted three wishes?” my inner voice asks. “Levi and I want a puppy.”

“You don’t speak for Levi.” 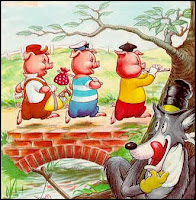 Posted by Misadventures of Widowhood at 9:43 AM