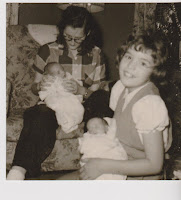 The woman in the photo above was married to my cousin. What does that make her, an in-law cousin? The twins were her babies and that’s me holding one of them. My parents were surrogate grandparents to this set of twins and another set that came into their family a few years later. Growing up, the two sets of twins spent a lot of time at our house and I did a lot of babysitting at their house. I should probably blame them and a family of nine kids I also babysat during my high school years for a phrase I’ve used tongue-in-cheek through-out my entire adult life: “I don’t babysit anyone who can’t say, ‘My stomach hurts. I need to go to the hospital.’” Not that anything bad ever happened while baby-sitting but babies are such a scary responsibility and by the time I was thirty the gods of infertility whispered in my ear, “Go forth and raise poodles, they’re easier” and I obeyed. I must have been a good baby-sitter, though, because the twins in this photo claim I was their role model and was responsible for them setting their sights on going to college. If that’s true, I’m flattered because they grew up to be wonderful women.

On Saturday the two sets of twins threw a party for their mom's 85th birthday and I was excited to see this branch of the family again. Life and distance got in the way of staying close in recent decades except for weddings and funerals. But family is still family and when you have so many shared memories it’s easy to fill an afternoon with laughter. We were all asked to bring a photo and the one above it the only one I had. Next winter I really need to do something about transferring all my slides to a computer file. I have a huge box of slides in the basement, twenty-twenty years of my life documented in a format I can’t access. The librarian who taught a genealogy class I took last fall said there is a raging debate in library circles involving transferring microfiche files to computers. One side says in a 100 years people may not be able to access computer files in the formats we use now and they shouldn’t destroy the microfiche as their documents are put online. Apparently, the microfiche reader machines are simple to maintain and repair. Others say it’s nonsense to let them continue to take up space. I get that debate, says the women with a box of floppy disks I don’t know what to do with. They’re sitting next to my slides.

Friday I met the son-I-with-I-had at a humongous auction house in a small town near-by. All their auctions are online and my friend swears by this method of getting rid of stuff so I thought I’d give it a try. When I pulled up to the loading dock there were 10-15 others doing the same thing and after getting a tour inside I told my friend, “I think I’ve just found my new best friend.” He laughed and replied, “I said exactly the same thing the first time I came here.” While I was waiting to sign in I talked to several others doing the same. They told me they are very happy with the ease and results of selling there compared to listing on e-Bay. This place take the photos, creates the listings and does the shipping all for a lower percentage than e-Bay takes and e-Bay doesn’t do anything but host your listings and process your money for an added fee. I took nine antiques Friday including three that would difficult to pack. Only one thing had a good memory attached, 42” oak and iron wagon neck yoke in case you have few a horses to hook up.

What was the memory attached to the antique neck yoke? One time the neighborhood was having its annual garage sale weekend and my wheelchair bound husband came home---down the middle of the street---with a car following him at two miles an hour. It seems he tried to straddle the wagon yoke across his electric wheelchair but didn’t get very far before it fell off, so someone took pity on him and carted it home for him. I hated that yoke on sight, but he was being his pre-stroke self so it made me happy to see him happy with his “prize.”

I’ve sold most of Don’s big “prizes” and “guy stuff” off since he passed but I still have more purging to go. If I can get into a rhythm of taking a load out to the auction house every week until the snow flies again I’d be in great shape to move next spring. That IF is a big word, though, because in my world I’m easily distracted by a widow’s bittersweet memories. I do have a Plan B; don't I always? If I lose my common-sense and buy a condo on impulse---like I did my car---before I’ve finished purging my new "best friend" has my back. They'll come to the house and buy whatever I don't move out when I left. How easy is that?  ©
Posted by Misadventures of Widowhood at 12:05 AM