Moving Forward While Looking Back 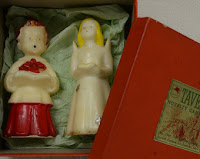 The Farmers Market is a crazy, good place. Even this late in the season when---can you believe it---I saw my first Christmas commercial on TV! It’s not even October yet but you’ve got to get those Christmas presents put in lay-away, says K-mart. Hurry, hurry before all the good stuff is gone! Back on topic: the vendors at the market all must have produce coming out of their ears because Saturday they were giving unadvertised freebies. One of them gave me two pounds of string beans when I asked for one. The corn grower gave me ten ears of ‘peaches and cream’ instead of six. The green pepper and tomatoes dealer doubled my order. I smiled and thanked them all for their generosity, of course, but I can’t eat that much produce! And the guilt of wasting food always weighs heavy on my mind---especially now when there’s so many displaced and hungry refugees fleeing their war-torn homeland on the news.

Solution: At seventy-something years old, and for the first time in my life, I needed to learn how to blanch produce for the freezer. Pots, pans, boiling water and ice water. How hard could it be? Turns, out it’s not hard---just time consuming, especially if you count the part where you have to clean up the kitchen afterward. I didn’t think I could blanch the dozen peaches I came home with so I mashed them up like strawberries for shortcake. But I didn’t have a plan or solution for the extra tomatoes. Decades ago, I helped my mom make her famous chili sauce a few times but that was more complicated than I wanted to get into, so instead I’m eating tomatoes morning, noon and night. That’s a slight exaggeration but I did discover they taste good sprinkled with French’s Fried Onions. My mom’s favorite way to eat fresh tomatoes was sprinkled with sugar, my husband liked them with salt and pepper. I like them with McCormick Bac’n Bites but I didn’t have any in the house. I thought about using the dog’s Beggin Strips. They look like bacon, they smell like (rancid) bacon but they have yellow dye #5 in them and I’m allergic to that. Tonight I’m having a BLT for dinner made with bacon cheddar beer bread from the Farmers Market. I might have to make one for the dog. He loves everything that goes into BLTs. He’s very good about eating fruits and vegetables.

Monday morning is my make-a-trip-to-the-auction-house day. The drive is about a half hour and it takes me through massive peach and apple orchids. Their picking is well underway. Packing crates were stacked higher than a house at several farms, ready to be transported to the canning plants. At one of the corn fields I went by there was a combine parked and ready to start cutting. It was old and probably paid for and it could only cut down four rows of corn at a time. When Don and I would go to heavy equipment bone yards to find parts for one of his three front-end loaders we’d run into farmers doing the same for their various farm equipment.

Don could fix anything. One of my favorite memories involves going to a bone yard where Don and the owner spent several hours stripping parts off from an old Trojan loader while I sat in the truck reading. After Don paid the guy, the man handed me thirty dollars and said, “Make this guy take you out for dinner. You shouldn’t have rush to get a meal on the table after keeping him company all day.” Little did the man know I didn’t cook and going to a restaurant was a given. But the look on Don’s face when bills went from his hands to the guy’s, then three tens given to me was priceless. We would have stopped for hamburgers but I upgraded us to steak. When the owner of the bone yard died, his tombstone made the newspaper. It was a large, marble bulldozer and, of course, Don insisted that we had to go see it the next time we were down in that county.

I sold off all of Don’s heavy equipment within nine months of his stroke and this week I took his vintage toy farm and heavy equipment to the auction house. Already, Christmas stuff is showing up at the auction house and I did my part. I brought all of Don’s candles---ten sets---that were made by his favorite oil company, Socony-Vaccum. If you have any vintage Christmas candles and see a red Pegasus on the bottom you'll know you have angels, trees, snowmen, choir kids or deer that were made in the 1930s. I hated those candles. At vendor swap meets we had to keep them from melting in the sun and we couldn’t sell them on e-Bay in the summertime for fear they’d melt in shipping, yet Don kept buying every single one he saw at estate sales which only proves that not all dead husbands become perfect, pedestal candidates when they pass. He had his flaws…though time and distance do make them more endearing. ©
Posted by Misadventures of Widowhood at 12:30 AM