Old Arguments and the New Cuba 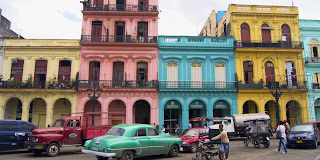 Before my husband and I met, he bought an old Victorian house that had been split into four apartments that shared two bathrooms. He owned it for more years than I like to remember because it was a lot of work to keep it up and that’s not counting all the remodeling we did to add two more bathrooms teaching ourselves plumbing, electrical wiring and sheetrock application along the way. Once when we painted the outside we hired three 15-16 year old fatherless boys to help and they ended up to be factors in an infamous fight that Don and I had. They were kids from the neighborhood whose mothers---for various reasons---didn’t pay a lot of attention to them. From the time they were 9-10 years old every time Don was outside working on a piece of equipment the boys would be there watching and getting what we nicknamed their “Fifteen with Father” talks. I can’t tell you how many times ‘the three musketeers’ would be in the back of our yellow convertible being our shadows during Don’s and my early years together. The beach, carnivals, car shows, music-in-the park, the rodeo and the races---we introduced them to a lot of things they’d never done before.

Back to the Victorian house: One day we were all busy bees painting on the exterior when Don sent me to pick up lunch for the crew. When I returned, I parked the car opposite the driveway. No big deal. It was a busy city street and parking was at a premium. Later on, Don backed his truck out of that driveway and hit my car. A normal person might have apologized. A normal person might have taken in the fact that I was in a legal parking space before he started chewing me out. “Why did you park there?” he yelled. “You know you’re going to get nailed when you park opposite a driveway!” I pointed out that HE was at fault for the accident---that I wasn’t even in the car. But he still had a full head of steam and when I asked him why he was yelling he waved his arm towards the teens who were watching the exchange and shouted, “To teach these boys where not to park a vehicle!”

“That’s just great!” I was yelling by then, too. “All you managed to teach them is it’s okay to yell at a woman for something you yourself did! Is that really the lesson you want them to learn?” And just like that, the steam left Don’s head and he got a look on his face akin to that of a little boy who’d just got caught teasing an alley cat into a frenzy. Game. Set. Match. The little woman won one for womankind when Don then told the boys that I was right and “a guy shouldn’t take his frustrations out on a woman.” Don would have made a good father. He wasn’t perfect but he was quick to admit when he was wrong and he rarely forgot that the three musketeers were like sponges who took in everything he said and did. He was a role model by default.

Change of topic: I have no plans to travel to Cuba but I went to this month’s 'We Travel' event anyway. It was one on the most interesting hours I’ve spent in a long time and before it was over I was longing to be the type of person who is adventurous enough to sign up for trips like that. One of the things I learned is that although the country has been recently opened up for travel between the U.S. and Cuba, there are many regulations and restrictions on who can go and why. People who have family there or who once lived there can go. Journalists can get in if they engage in interviews on a daily basis and average people, like those in the audience, can get in if they are take part in a program called People-to-People---cultural and educational exchanges. You have to sign a contract that you’re going to interact with the Cubans each day from nine to four and keep a journal of how much time you spent where and what you talked about.

The company who organizes these cultural and educational exchanges schedule three-four events a day and they sound interesting. You go in groups of twenty-four and you learn about the Cubans as they learn about Americans. The interactions take place at tobacco or cocoa farms, cigar factories, Hemingway’s house, with a baseball team and the American Car Club. You visit schools and historical landmarks that go back to the days of Columbus. Art, music and dance are a big part of the exchanges, too. One thing that I thought was cool is in the cigar factories they have someone who reads the news to the workers while they work. The speaker said that travel to Cuba could close back up depending on who gets elected next time and if it doesn’t American investments into the country is going to change its character and charm. In other words, the ideal time to go is now. Sometimes I wish I was younger with a better working blander, and seeing that 'We Travel' presentation was one of those times. Oh, well, maybe in my next life…. ©
Posted by Misadventures of Widowhood at 12:30 AM