Where the Past and Future Collide 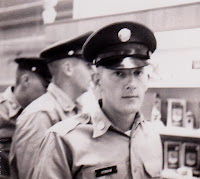 Like many people who grew up poor, my husband saved everything. And even though he died three and a half years ago, and I e-Bayed my brains out in the first two years, I’m still sorting through the remnants of his life. Recently, I’ve been purging in the basement---stuff that never should have been put down there fourteen years ago when the house was brand new. In my defense, after Don’s stroke every object from his past became a battle ground and I gave in way too much. How could I tell someone who'd just lost the use of one side of his body and his ability to community with words or written language that it was time to let go of even more? Half the time I feared he’d have another stroke as he tried to make me understand why certain things had 'special' meaning to him. That’s the long version of why I’ve been on a madcap mission to finally sort through the stuff downstairs. The short version is I want to move to a condo and my past and future are colliding.

Some stuff is easy. I pack it up and earmark it for a trip to the auction house or Goodwill. Other things I find are fun-but-time-consuming like a bundle of letters Don wrote to his mom and dad when he was in the Army. In several letters he was obsessed with getting his chainsaw shipped to the base so in his off time he could cut down trees. “Dutch elm disease is killing all the trees down here,” he wrote, “and I’m trying to get a contract from the Army to take care of them.” Several letters later he wrote, “Forget about the chainsaw. A dead tree will have to fall on a general’s jeep before anyone cares. I’ve never seen anything like the Army’s red tape, it’s terrible!” Even though life on an Army base kept him plenty busy it was so like Don to always be looking for a way to make some extra money on the side. One job was never enough for a guy whose childhood memories included people coming to the house to turn off the utilities. Yes, ladies and gentlemen, that’s how workaholics are born. At least my workaholic.

In the box with the letters I found a family history treasure---his mother’s 1918 high school graduation class photo---seven students! Rare for a woman in those days, she went on to college and eventually taught school for a few years before getting married and popping out four sons. She worked hard tending a garden, canning, cooking and cleaning for her boys plus a farm hand and a husband who at one point in his life had big dreams. Before taking up farming, Don's dad put all his efforts into building a bus line that ran from one end of the state to the other. He did that just before the Wall Street Crash of 1929 and I found the receipt for, and a photo of his very first bus to prove it. You can guess how that investment turned out during the ten year depression following The Crash. The receipt, photos and a mantle clock from the family farm will be passed on to Don’s brother who after all these years is starting to get sentimental over family heirlooms. Yes, Virginia, you can mix Danish Modern furniture with antiques.

But the memory trigger I found this week that choked me up was a Valentine’s Day card I created on the computer in 2000. My dad had died on the Christmas before and I was thanking Don for all the support he had given me over the long, hard year leading up to Dad’s death. Without his physical, emotional and financial support I never would have come through it with all my marbles still residing inside my head. As it was, by that Valentine’s Day I was still in a turn buckle arm cast from a freak accident I had two weeks before Dad died. I came close to losing the bottom half of my arm. But the hospital called in a crusty, old woman bone specialist who thought she could and did save my arm. The herd of doctors who came in to look at my before and after x-rays were totally amazed at her work but all I could do is cry and I didn’t stop crying until after Dad’s funeral. At the end of the ‘love letter’ I wrote: “Let’s make 2000 a year of positive changes and good times.” Two and a half months later, Don had his massive stroke and all chances for positive changes and good times left the building with Elvis.

In the twelve years that I was Don’s caregiver/spouse there were many changes, of course, but the thing that sticks in my mind as I write this is how intertwined each decade of our lives were. How they built on one another to create the people we became. A few people looked at our post-stroke lives and took away a snapshot of a mismatched couple. “Put Don in a nursing home and go on with your life,” they told me. That's easy for someone to say who wasn’t there when Don was my rock without complaint, through our four plus decades of give and take. How could I not do the same for him? That’s what deeply committed couples do. You stick with it even when it isn’t convenient, when it isn’t all roses and romance. Life balances. The yin always comes with the yang.

This will sound strange after three and a half year of living alone but I still feel like a bookend at a garage sale that’s lost its mate. But hopefully that bookend will have a new purpose in a new home and someday I hope to do the same. In the meantime, my past and future are colliding in my present. ©

NOTE: That's Don in the photo at the top.
Posted by Misadventures of Widowhood at 12:30 AM