Thank God for May, Eyesight and Gatherings 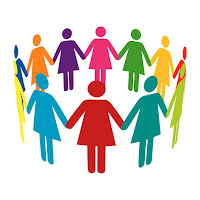 I’ve never been so glad to see the end of a month and the beginning of another. This year I had twenty-five appointments spread out over the thirty days of April and it was like having a job, getting up every day with a mission on my day planner. It’s easy to understand why people like me who are living in hard winter climates do this to ourselves. In addition to the biannual medical stuff that we older people save up for good driving weather, we’re sick of being snowed in thus we over schedule fun stuff as soon as the snow disappears. And then there are the appointments related to getting the house and yard ready for summer---the irrigation system start-up, the spring cleanup arranged, the eaves cleaned out and the weed control guy lined up. First world stuff---all of it and I still have more first world things to do before summer gets into full swing. But that window washing and carpet cleaning are going to have to wait. I have a dead tree that needs to come down before it falls into my bedroom and my maintenance budget is getting stretched. Woo is me. At least I have a maintenance budget. Some people don’t even have a place to maintain.

The last appointment I had in April was for the eye doctor. My eyes have been bothering me for a couple of years now but there’s nothing wrong with them that glasses can correct. In one eye I have a giant floater that looks like a spider crawling over anything light colored like walls, floors or book pages. When it first appeared it scared the heck out of me and when I called the eye doctor he had me come in that same day. Nothing to worry about, he said, unless I start getting white flashes of light in that eye then it crosses over to the land of eye emergencies. The spider will go away in time but it’s been with me for over a year now and it still startles me from time to time. I hate spiders! With the other eye I just found out I have a condition that only happens to 6% of the population. The doctor explained it this way: If you place your hand palm down on a piece of fabric with your fingers spread and then you draw that fabric into a ball…that’s what is happening to the lens in my eye. It causes some mild distortions in my sight and in rare cases it could get bad enough to require surgery. The first thing I thought of is there is an artist I studied in the ‘60s who painted like what I imagine I’ll see if the condition gets worse. Maybe if that happens I could revive his style and become famous like a modern-day Grandma Moses. That’s not out of the realm of possibilities. I once read an article written by an ophthalmology who credited eye diseases for the way various famous artists in past centuries saw and painted their worlds. Heck, I could make lemonade out of anything.

The senior hall started a new monthly event called The Gathering. It’s a mixer for people looking for friends and I went to the first one…not opposite sex friends, just friends in general. It was great! Around twenty-five of us showed up. The facilitator did what I imagine are common "mixer games” designed to get us talking. With one she had us each pick up a picture when we entered the room and later on we had to talk about. I picked a polar bear which led to a discussion of environmental issues. Another woman picked a butterfly and told how, to her, it represents her faith in God and how she has a butterfly in every room of her house. Another person picked a photo of a dog and she talked about her pets. Sitting there listening I discovered things in common with others in the room and with one woman/recent widow in particular we have three overlapping interests. I signed up for the next two Gatherings and with the next one they’ll have a contact list of those in the group so we can arrange coffee dates or whatever.

In the first years following my husband’s death I was in an almost desperate search for friends. (Why did I use a modifier with 'desperate'? I did feel desperate, just admit it Jean, you're a big girl now!) Anyway, It took a while for me to figure out that the hole in my life Don 's passing left behind can’t be filled easily. I was meeting and making friendly acquaintances and although I naively missed a few overtures, finding friends to do things with, to talk to occasionally on the phone, didn’t happening. I made peace with the fact that my friendless status quo would be with me for the rest of my life. Now, with The Gatherings I’m guardedly optimistic about resuming the search. Everyone at The Gatherings is looking for friends which is different than going “cold canvasing” out into the big, scary world looking for a connection. I’ll give it the summer…. ©


P.S. There is a new widow in my 'Blogs I Follow" feed---her husband died in February. If you have the time to pop over to say, "Hi" or to give her some encouragement, you'll find her at: Surviving Widowhood
Posted by Misadventures of Widowhood at 12:30 AM