The End is Near---no, not that one! Markets and Madness

The farmers market in the fall is a different place than the beehive of activity it is in the summer. It wasn’t just the sparseness of shoppers and fewer tents lined up against a backdrop of fall colors along the river. It was also the sight of vendors wearing knit hats and gloves as they sipped on steaming cups of coffee. The sweet aroma of the kettle corn maker, the baker and the flower vendors still filled the air but in place of vendors selling cucumbers, corn, peppers and tomatoes were tables overflowing with squash, pumpkins, root vegetables and apples. Instead of tender plants for gardeners were bulbs and potted mums. I bought cinnamon bread, heads of broccoli and cauliflower plus carrots and squash to hold over the winter (wrapped in newspaper and stored in the garage). I was going to buy a bouquet of mixed cut flowers but I fell in love with huge stems of cut ornamental kale and I bought three in dark lilac fading to soft mauve.

One more week and the market will close and I’ll go back for potatoes and maybe breakfast at a nearby place that was a favorite of my husband’s. It’s a terrible place to get into with a wheelchair but the market people who frequent the place always went out of their way to help with the double doors. Don never seemed to notice how many machines dispensing gumballs and newspapers people had to move out of his path. All he ever saw was their friendly, smiling faces. It was a gift not to notice the inconveniences of going to that old, tourist town restaurant because that sort of thing tends to make a lot of disabled people stay at home. I suppose it was because Don, the master storyteller in his pre-stroke days, was used to being the center of attention. I, on the other hand preferred then, as I do now, to be like a camera drone recording life from a safe distance. And from my bird’s eye view I’m happy to report that most people show kindness when it counts. Motivational speaker and author Steve Marabholi wrote: “It only takes a split second to smile and forget, yet to someone that needed it, it can last a lifetime.” Boy isn’t that a fact! Look how long I’m remembering the time and place of warm smiles and small gestures of kindness.

On the opposite end of kindness is the meanness that has become part of our current election season and aren’t we all glad that, like the farmers market, the end is near. Am I alone is sensing a shift in hostilities? People have made up their minds and in some cases have already voted. Soon, Facebook will no longer challenge my willpower and self-control to not get involved in nasty political exchanges with some in-law family members. One woman in particular has spent months posting extremist, hate-filled and offensive stuff but this morning I thought someone must have hacked her account when she posted a meme that read: “The less you respond to negativity the more peaceful your life will become.” I read that over several times and spent a full two minutes trying to decide if I should hit the key that would publish a response I had typed that read, “The less a person posts negativity the more peaceful everyone’s life will become.” In the end, I back-spaced my catty words off the reply box and left. Many people unfriend someone who bugs their sanity and temps them to leave civility behind but that’s not my style. I like to have my finger on the pulse of what family thinks…recording it like that camera drone overhead. But I will admit I no longer feel an ounce of warmth toward this woman…and all because of this election!

“Martin Luther King Jr. once said, “Our lives begin to end the day we become silent about things that matter.” Those words roll around inside my head, telling me I should have taken a stand on Facebook starting months ago, but my silence was insurance against getting turned down if I should ever need a ride to a med station or the hospital. I live close to In-Law Land so my silence was self-servicing and I’m not proud of that. If I do give in before the election and post a Facebook response to the “great, white hopes” of a Trump presidency or an armed resistance if he doesn’t win, I hope it will be something polite like the words of Franklin D. Roosevelt: “The fate of America cannot depend on any one man. The greatness of America is grounded in principles and not on any single personality.” Can you tell I just got a new book titled, The Best Liberal Quotes Ever? ©

The photo at the top is of the fall cornucopia on my dining room table. I know they’re hopeless out of fashion but I’ve been making them since the early ‘70s and I still love them. The scarecrow below is on my front door and the four foot wooden trencher is along my breakfast bar. (If there isn’t a holiday around, the trencher gets filled with stones and fossils.) And last but not least are my farmers market cut kale. 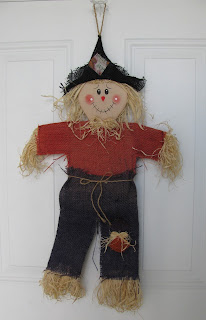 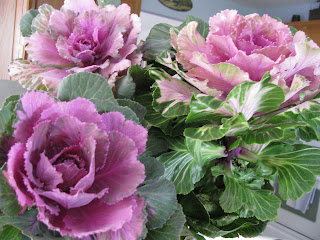