Two Days into a Busy Week 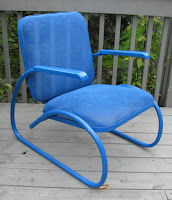 Time moves fast when you’re busy. Only two days into the week and already I’ve done more than I usually do. It’s the season. Fall means extra work and more appointments. Take Monday, for example. My bi-annual appointment with my internist was in the morning and when I got home I spray painted one of my deck chairs which turned into another job. I had saved the cardboard box my sleeper chair came in last winter to use as a “paint booth” but it wasn’t quite as big as I thought it was and I ended up with a fog of bright blue paint on my gray deck, outlining one edge of the box. I’ve made a lot of cardboard paint booths over the years and never had that happen before. The over spray looked god-awful! Thankfully, using a grease and oil cleaner, a scrub brush and a lot of manual labor I was able to get the fog off.

And did I mention that in between doctor and the chair disaster the dog upchucked on the library floor---a foot from the place he threw up just after the carpet cleaners left last week? I’ve never had a dog who vomits as much as Levi. Recently I bought him some Science Diet food for sensitive stomachs, hoping that would help but he’ll pick around those kibbles and won’t eat them until everything else in the dish is gone and its midnight in the old corral.

I like my doctor but he actually takes too much time with his patients. He's always running 30-45 minutes late but when he’s in the room with you he’ll never rush you even when you’d like to tell him, “Let’s move this along, time's a wasting.” He’s nice guy, easy to talk with and he’s always got a student doctor tagging along after him who occasionally gets invited to weigh in with opinions. This time the student looked just like Pee Wee Herman. You’d think when a guy looks like a convicted pervert someone would tell him not to wear a Pee Wee classic bow tie and his slicked down black hair style. I hate to judge a person’s entire future by his or her looks but I can’t imagine going to a Pee Wee Herman look-a-like for a doctor. But then again, perverts might be "in" now, if our election cycle is any indication.

I asked my internist what kind of doctor I’d see for my thumb and toe joints that get stuck and he ended up using his vibrating tool and stick pin on my legs and feet and feeling up the bones in my thumbs. More osteoarthritis damage. If my joints get stuck in place too often for too long, I’ll have to see a hand specialist to get shots in the joints. But he told me not to stop knitting or using my computer mouse, which is when I’m bothered the most. "Use those joints!" Yes, sir! You don’t have to tell me twice. He also ordered some blood work to check on my thyroid and vitamin B-12 levels as possible causes for the needles-and-pins feelings I get in my foot at bedtime and my fingers being cold all the time. For a septuagenarian, I don’t have a lot of health issues other than bad bones and joints, and even though I was dreading getting weighed-in at this appointment I only gained two pounds since last April. “Surprise, surprise!” as Gomer Pyle would say.

Tuesday I got up at the crack of dawn again, to go to the blood lab and to my third ‘Matter of Balance’ class. Every one of these classes has had some drama involved. Last week it was the car that tried to join us in the classroom. This week the facilitator couldn’t get the movie to play right and we ended up in a dark room starring at a blue screen for 20 minutes while listening to old people on the video talking about the importance of making time for exercise. I’m almost sure it was better without the visuals. The videos for this government sponsored class were made so long ago that the old people/actors’ clothing and home decor remind me of Aunt Bee and her friends from Andy Griffith’s Mayberry.

The rest of our two hour class was actually helpful. We learned how to do a series of exercises and the facilitator said the most important one in the entire workbook was “foot circles” to strengthen the ankles. Regaining balance in a trip comes mostly from the strength in our ankles, she says. The book describes the exercise like this: “Sit with both feet on floor. Raise one foot and gently circle (rotate) your foot in a clockwise direction five times. Change directions and repeat. Switch to other foot and repeat.” Of the twenty-five exercises we learned, for homework we were told to pick one to commit to doing every day and next week we have to report on how we incorporated it into our routines. It annoys the heck out of me that this class moves so slowly. One exercise out of twenty-five? Why not five or ten? Let’s get this show on the road! But I’ll keep going because I really want to get to week six when a therapist from the hospital will come in to teach us how to get up after a fall, and maybe by week eight I will lose my strange, resentful attitude regarding the class. Where is that coming from? I can’t figure it out. ©
Posted by Misadventures of Widowhood at 12:13 AM