La La Land and Baywatch in the Same Week, Oh My! 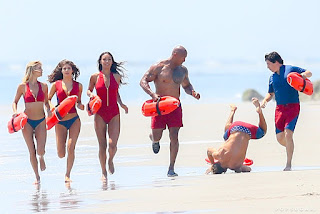 I finally got to see La la land starring Emma Stone and Ryan Gosling. Not that it was high on my list of movies to see. In fact, from the mixed feedback I’ve heard it wasn’t even on the list. But one of the ‘Gathering Girls’ found a copy at the library, invited us over and there was no way I was going to miss an afternoon with my posse of new friends. What a fun time we had. We got the two-cent tour of her condo, ate sandwiches we each brought with us and watched the movie while doing our share of cat-calling the action on the screen. Then we laughed and talked about silly stuff like the “dress codes” for getting full body massages and yearly mole checks---no underpants for the former, in case you’re wondering, but you get to keep them on for the latter.

Back to La La Land: I’m glad I saw the movie because I’ve got a better handle on why the film ran away with the awards it did. The reviewer at The Guardian probably explained its popularity the best: “For the millions of Americans who are depressed and anxious about the state of the nation, La La Land is a trifle that seems more substantial because of our desperate need for distraction.” And I also agree with a review I found at Reel Talk Online: “La La Land is fun and cutesy, and made me leave the theater with a big, goofy smile on my face. But there's one distinct difference between good movie musicals and great movie musicals: with a great movie musical, you can strip all the song and dance numbers from it and it can still be great. Because it has a great story, great dialogue, pitch perfect performances.” La La Land is short on dialogue and the story could be boiled down to one sentence: A jazz pianist and aspiring actress fall in and out of love.

One of the Gathering Girls had already seen La La Land but she kept mum about what was coming after the ‘turning point’ of the story other than to say, “We’ll all need a piece of cake when the movie ends.” Yup, bring on the Pepperidge Farms chocolate fudge layer cake! We got cheated out of a happy ending. And not a single song in the film will stand the test of time like Gene Kelly’s “Singin’ in the Rain” did plus Ryan and Emmy couldn’t match the singing and dance talent of Debby Reynolds and Gene Kelly. Ohmygod, I was totally crushing on Gene Kelly when I was a kid. I saw all his movies, took tap dancing classes because of him and Fred Astaire and I promised anyone who’d listen that I was going to marry Gene when I grew up. Jean and Gene. I did briefly date a guy named Gene and I think we both tried to like each other because of the twin names thing. If we had stayed together we probably would have been one of those goofy couple who wears matching, argyle sweater vests. (If digression was a martial art I'd be a grandmaster.)

That was Saturday then Monday came along with its scheduled monthly brunch with the Gathering Girls and I worried that we’d run out of things to talk about, seeing each other so close together but we didn’t. After eating, two of us headed to the movie theater to see Baywatch starring Dwayne Johnson. The New York Times reviewer said: “Baywatch is sleazy and wholesome, silly and earnest, dumb as a box of sand and slyly self-aware. It’s soft-serve ice cream. Crinkle-cut fries. A hot car and a skin rash. Tacky and phony and nasty and also kind of fun.” What a bunch of contradictory words strung together and I read them before seeing the movie. But you know what, the movie was all those things as it spoofed the original TV series with lines like: “Why does she always look like she’s running slow-mo?” “You see it too? She’s the reason I believe in God.” I remember watching an episode of Baywatch on TV in the early ‘90s with three-four guys in the room and they were hooting and howling about the slow-motion running of Pamela Anderson. This time, the slow-mo running and other nods to the original series had us laughing like little kids at an amusement park.

As cheesy as Baywatch was and as disjointed as La La Land was I hope Hollywood makes more of these fluff-stuffed films as a counter-balance to all the stressful things going on around the world and in Washington, D.C. A few hours of escapism with some gal pals who love to laugh as much as I do was just what I needed. Before the mini movie marathon I was starting to feel overwhelmed by this, that and the other thing, but I’m recharged now.

“Here's to the ones who dream, Foolish as they may seem, Here's to the hearts that ache, Here’s to the mess we make.” That’s the chorus of a song Emma Stone sang in La La Land. But don’t waste your time trying to figure out why I thought that it’s a proper ending to this blog entry. I just knew the minute I heard it that I loved it enough to find a way to work it in my next writing session. ©