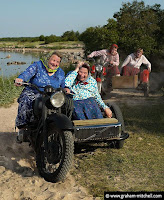 I now officially have the cleanest gutters and downspouts on the block and it only cost me a hundred bucks. Trust me, that’s a bargain. This spring my neighbor cut down seven dead, 100 foot tall pine trees so I’m hoping my gutters will stay clean longer than in the past. The wads of yucky pine needles and maple leaves the company threw on the ground looked like bird’s nests for vultures. Having my gutters cleaned yearly---sometimes twice yearly---is a “thing” for me and I always schedule it just before the Fourth of July. Why? Because I have neighbors who are into shooting off fireworks and I’m afraid those rockets and other things that go kaboom in the night will start my house on fire. Every year, I find spent fireworks in my yard, just feet from reaching my roof. It's legal here around the holiday, so don’t bother suggesting I complain. It’s also legal to have open campfires in our back yards and two of my neighbors have them quite often.

I officially also have the cleanest windows on the block. This week I had a company do those as well. Twenty-six windows and glass doors for $180, another bargain. It’s been five years since they’ve been professionally cleaned inside and five years since the outside has been done by anyone other than Mother Nature. The crew took the screens out, cleaned them and the window frames as well as all the glass. Two birds have died striking the windows since yesterday---the glass is that clean. Later today I’ll go to the bird supply store to get some bird strike decals. I took the old ones off for the cleaning crew because their UV reflective quality does wear out over time. And I thought I wouldn’t need them anymore, now that I don’t feed the birds at the back of my house which is where the birds did their suicide dives. The woodpeckers outside my breakfast nook window got a reprieve. Right now, I’m getting as many as seven woodpeckers at a time coming to their suet-plugs-in-a-log feeder and half of them are babies getting fed beak-to-beak by their mamas.

The tree guy was also here this week. Can you sense of pattern here? Two of my best trees have/had a disease and this week’s treatment was the second of three needed. What a great recovery they are making, worth the $88 spent per service call. That may sound like a lot of money to spend on trees but if you’ve ever had a landscape company come in to plant mature trees you know it’s an investment worth protecting. Not to mention it costs far more than $264 to have two dead trees cut down.

Oh, the joys of home ownership! Ask me later on for that list because I still have two more maintenance contractors that need to come out for I'm done for the summer: one for carpet cleaning and one for my roof. Has anyone had any experience with low pressure washing your roof with a chemical that kills the algae (the black streaks)? It doesn’t cost much (under $300) and the guy who came out to give me a price says I don’t need a new roof at all. Oh course, the guy who came out to give me an estimate on replacing the roof ($14,400) says I do need a new one. One of the Gathering Girls, who is on her condo board said, “We looked into that wash. Don’t waste your money” but someone else I know had it done seven years ago and the black streaks haven’t come back yet. Decisions like this can drive a widow crazy. No wonder so many elderly people give up on maintenance and are living in houses that are falling down around them.

I can’t believe June is almost over and the fun I thought I’d be having this summer doesn’t look like it’s going to materialize and there is no one else to blame but myself for setting unrealistic expectations. I had high hopes for my gaggle of new friends (aka The Gathering Girls) going to summer street fairs, outdoor music concerts and art-in-the-park shows---maybe even spend an afternoon at Lake Michigan. But after making concrete plans to go to the first outdoor event of the season three of the six of us buggered out on going because they didn’t think they could do the walking required. Another had a funeral to attend so that left just two of us. Not being able to walk a couple of small town blocks, cuts out a lot of activities we could have planned. We are all still hanging in there with our “First Monday Monthly Brunches” and lunch/dessert after the official, senior hall Gathering (for people looking for friends) and I foresee all us still going to movies if Hollywood would just cooperate and put out something worth seeing this summer. But as a group we’re going to need some fresh ideas that are lower key than the vagabonds-wandering-in-the-summer-sun stuff I had envisioned. Growing friendships is tricky business. No wonder we’re all going to a "Friendship for Dummies" group. Finding our common denominators, working around our individual foibles and family obligations is like solving a Chinese puzzle box; it's going to take a little frustration and a lot determination to get to the prize. © 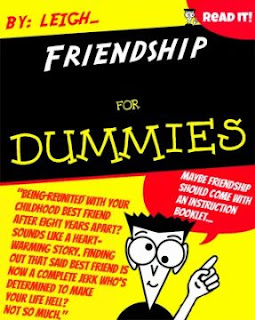