The Generals, the Eclipse and the Donut Diet 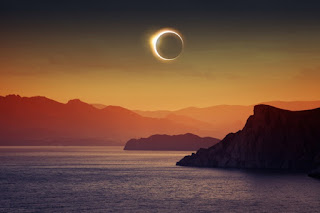 During WWII it was discovered by the U.S. military that too many young men had rickets---soft and weaken bones caused by a prolonged vitamin D deficiency---and they had to be rejected from serving. Alarmed by what they considered to be a danger to our national security, the generals pushed for solutions and thus the 1946 Congress passed the National School Lunch Act: “It is hereby declared to be the policy of Congress, as a measure of national security to safeguard the health and well-being of the Nation’s children and to encourage the domestic consumption of nutritious agricultural commodities”…yadda, yadda, yadda all boiling down to the reason why I have memories from kindergarten of getting raisins, an apple and a cup of milk every morning at recess, compliments of the federal government. I liked the milk and raisins but I still don’t like apples unless they’re baked in a pie and smothered with ice cream.

I thought about this little known bit of military history this week when columnist and CNN host of GPS, Fareed Zakaria, wrote the following regarding what happened in Charlottesville: “The public figures who deserve the most praise this week are the military brass. In a remarkable act of leadership for people who actually work under the president, the heads of five branches of the armed forces independently issued statements unequivocally denouncing racism and bigotry. Perhaps this is because the military has been the institution that has most successfully integrated the nation’s diverse population. Perhaps it is because the military remains an old-fashioned place, where a sense of honor, standards and values still holds. The military chiefs have shown why they still command so much respect in the country…” I don’t know about you, but those words give me comfort. They tell me the generals have the balls to speak truth to power and will be the firewall that keeps the crazy guy in the White House in check.

Okay, enough rehashing of last week’s collective “melt down” and on to how I spent the eclipse. I started out on Sunday by converting a Post’s Great Grains cereal box into an eclipse viewing box. I also read an article on protecting pets against getting their retinas burned into half-moon shaped damage. A lot of good that did, I couldn’t find a pair of eclipse viewing glasses for myself let alone a second pair to custom-fit on Levi. I had lunch plans with one of my Gathering Girls friends on eclipse day, made before I thought about the fact that something important was happening in the sky then. And while we’d planned on eating outside near the river in my adopted home town, I thought I’d feel silly carrying my viewing box around in public. Seriously, why do I care about things like that? Still, I do and if I had had the drying time I would have decoupaged my Great Grains eclipse viewing box, put a handle on it and pretended it was a purse. Instead I left it in the car.

West Michigan was not in the path of totality so we only saw an 80% eclipse of the sun where I live and as we sat next to the river waiting for it to happen a couple of sweet little girls came over and let us use their glasses for a few minutes. It was cool to see but we were both surprised that it didn’t even get twilight dark at 2:22 when the moon reached maximum coverage of the sun. But what we did notice was the temperature dropped and the algae smell of the near-by dam intensified. It was eerie and I half expected the water to quit flowing over the dam. A man---as sweet as the little girls---came by and offered us a look through his glasses so we got to see the tail end of the eclipse as well as the beginning. That night on the news they said the temperatures in the eclipse path dropped from six to twelve degrees across the nation. Holy cow, it wasn't just our imaginations!

In the 21th century we understand the science behind eclipses. We appreciate the smarty-pants people who figured out what’s been happening in the skies since before the first eclipse was documented on ancient clay tablets. But if I live to be 100 I’ll never understand how scientists knew the so-named Einstein's Eclipse of 1919 could confirm Einstein’s Theory of General Relativity---you know the one, the theory that describes gravity as a “warping of space-time.” They did that by measuring the bending of light from stars during the nearly seven minutes the sun was blocked by the moon. Say what? How did they measure that? And how the heck do people get so Sheldon Cooper smart? I can’t even figure out why the bakery at the grocery store just added a prominent sign saying that the maximum number of calories an average person should eat daily is 2,000 and most donuts are 160 calories. Are they saying we can eat twelve and a half donuts a day if we skip all the nutritional stuff? And if we do that will we all get rickets? ©

Oddball Moments from an Unforgettable Eclipse