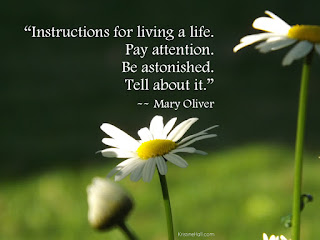 “Instructions for living a life: Pay attention. Be astonished. Tell about it.” I came to read these words from Mary Oliver’s poem Sometimes in a round-about way. I went to a lecture/slide show this week presented by a guy who said this stanza was once printed on his business cards because it describes his philosophy for taking photographs and writing poems about his walks through nature. It’s the second presentation of his I’ve been to and while I wasn’t totally impressed with his first one I wanted to see what his photos looked like on the senior hall’s new A/V system with its two curved split screens that allows the center to rearrange the chairs so that no one has a bad seat. We’ve been fund raising for this system for what seems like forever and it was worth it. This time, his flowers and bird photos were like high quality greeting cards---so sharp, colorful and detailed. I actually felt sorry for the guy because with his first lecture/slide show there was over a hundred in attendance but only sixty-five showed up this time. If my curiosity hadn’t brought me back and I would have missed seeing how good he actually is at paying attention and telling about it.

My husband was an amateur photographer. He had a fancy-dance, foot-long camera with all the special lens and filters and he took the kind of close-ups I saw at this senior hall presentation. I used to think he got interested in the hobby because I was into photography at the time we met but I came to believe that his mom, with her little box Brownie, probably planted the seeds and I just helped them grow by introducing him to bigger and better gadgets. Mostly I loved taking photos of people but Don was into nature shots and he ran with that theme. He was good at it and he credited Canon Cameras for that, but the guy from the lecture said he gave the credit to God…“if that’s okay with you,” he added, “and if it’s not, I’m going to do it anyway. I’m a Christian through and through.”

On the way home from the slide show I got an unexpected lump in my throat thinking about the similarities between the photos taken by Don and this guy who calls himself Father Nature. They both love/loved photographing the mountains, vegetation and wild life in Colorado. I swear Father Nature and Don must have been standing in the same places taking pictures. Calendar shots, one after another. After Don’s stroke he couldn’t use his camera one-handed and I found him another that could be managed one-handed/left-handed and after I taught myself how to do it, I tried teaching him. But I couldn’t stoke his creative embers back to life. Long-time family caregivers will know what I mean when I say that sometimes people die in stages.

Back to Mary Oliver. If you’re like me, you didn’t know that Mary is an American poet who, according to The New York Times is “far and away, this country’s best-selling poet.” If you look at her list of published works, you get the impression that she’s prolific which begs the question, why hadn’t I heard about her before?  She is 81 and apparently is famous for saying things like: “I don't want to end up simply having visited this world” and “He is exactly the poem I wanted to write.” At first glance at Mary Oliver’s popularity I wondered which came first the chicken or the egg. So many of her lines fit perfectly in memes, on coffee cups and other what-nots you can pick up in a gift shop but was she popular in literary circles before she hit the mainstream marketplace? At second glance, the answer is a resounding “yes.” Obviously, I need some of that educating they talk about in them there schools. My knowledge of American poets would fit into a Barbie doll shoe.

This week I also got to see both of my nieces at the same time, a rare occurrence unless it’s Christmas. I had some papers we had to have signed and witnessed in front of a Notary Public that will give them the right to plan my funeral, more precisely to order a cremation. Evidently, if you don’t have children or a spouse in my state, it creates a problem if you don’t want your nearest kin (my brother in my case) to make that decision. These papers will save my family some headaches after I die. And my body won’t have to cool its heels waiting for the coroner to establish who has the legal right to say where and how I end up. It doesn’t matter if you write out your wishes or how many people you tell, if your next of kin doesn’t want you cremated, it won’t happen…unless you've taken this over-riding step of naming a designated funeral representative who you're pretty sure will follow your wishes. Am I a cross my T’s and dot my I’s kind of person, or what? ©
Posted by Misadventures of Widowhood at 12:30 AM