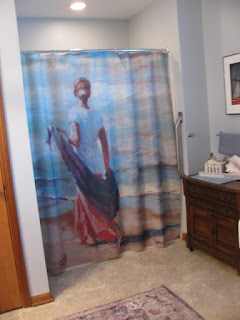 I’ve been planning my bedroom and bath redecorating project since January when I wore out the internet shopping for a quilt and shower curtain to establish a color palette. I wanted a girlie, beach cottage theme which probably has you wondering why I’m now the proud owner of newly painted gray walls, white ceilings and freshly steam-cleaned gray carpeting. The answer would be that I like starting with a neutral foundation that lends itself to making changes down the road should I get tired of living with the pale coral and soft aqua accents I’ll be living with for a while. Those are not colors I’ve ever had before and, believe me, it was hard not to go full out with pale pink and burgundy cabbage roses with moss green accents that I lived with for years (in my pre-husband life) and I still adore that combination.

My redecorating project was a long time in the thinking stage because I wanted to get a new mattress and bed and the harsh winter and bad roads kept me from shopping. And it was also hard to justify getting rid of my old mattress that still has a lot of life in it. But the bottom line is it’s too heavy for me to lift to make properly since my issue with my elbow that resulted in a life-time weight restriction on what I can lift unless I want to risk an elbow replacement surgery. I’ll bet I’m the only mattress shopper who had to act out putting bedding on a mattress before ordering one. Not being able to make a proper bed, I think, is contributing to my restless sleep. And I hate the way cleaning service girls don’t have a clue how to make a hospital corner. I’m so old that all females had to learn how to make them to get out of high school. I doubt schools even teach ‘domestic engineering’ anymore aka home economics.

Figuring out a schedule for painting, carpet cleaning, pickup on the old twin mattresses and bed frames, delivery on a new full-size bed and finally delivery on the mattress was driving me crazy. No matter how I shook it up, I figured there would be a few nights of me fighting the dog for the couch. Stay tuned half the swap-out is completed and the rest should occur over the coming week. In the meantime, the bathroom is almost finished. I still have some artwork to go up. The photo at the top is a preview of my big reveal when the whole project is finished. I love that shower curtain!

Monday I woke up with an Ambien hangover which has never happened with that drug. Or maybe it was a hard-work hangover because the day before I wore myself out washing windows and mini-blinds and polishing furniture. But I had places to go and things to do and one of those things was to have brunch with my Gathering Girls friends. It was the day after St. Patrick’s Day and I was lucky to score a great corn beef sandwich. When I got home---after a detour to Bed, Bath and Beyond to buy sheets and towels---I got a call from one of my friends. She was crying because she’d lost a diamond and sapphire ring she’d paid $1,500 for, but more importantly it had a great deal of sentimental value. She called the restaurant. They did a search around our table and out where she parked. She searched inside her car and around her house. A few hours later she called back. The ring was sitting in a soap dish in her guest bathroom. She figured she hadn't even worn the ring to brunch. Haven’t we all been there with something we thought we lost? I’m just glad it wasn't me, this time, who had to call all my friends back and own up to having a senior moment.

Now a warning to Trump supporters: Stop reading here unless you have an answer to what you think he had to gain by bad-mouthing John McCain in a series of tweets this past weekend? Did he think we’d be so outraged over his treatment of a guy who’s been died since August that we’d be distracted from the fact that the terrorist who killed fifty people at two mosques in New Zealand wrote in his manifest that President Trump's White Nationalism was an inspiration to him? I feel badly for McCain’s family. At least McCain’s daughter had a good come back: "No one will ever love you the way they loved my father....”

Trump also spent time twitter-ranting about GM and Saturday Night Live---that’s what keeps him up in the night? Forty-nine tweets over the weekend from his presidential account but no mention of the disastrous bomb cyclone that raged across the Midwest leaving behind devastating floods. No compassion for American still in peril. But he did tweet several times to his fans to put pressure on FOX News to bring back pundit Jeanine Pirro who’d been suspended for making Islamophobia remarks plus he whined-tweeted about Hillary, Steele, McCabe, Amar Ilham, Weissmann, various republicans and the country of France. Okay, rant off. In truth I’ve cut the time I usually spend on politics in half this past month or two. But I fear I may have to redecorate my entire house to stay sane between now and the next election. And should he get re-elected? I'm going to invest in a barf-bag factory. ©
Posted by Misadventures of Widowhood at 12:30 AM