Everything That was Old is New Again 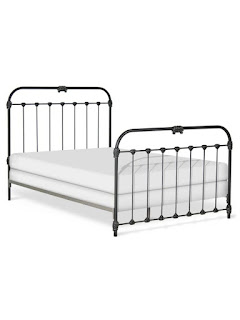 I’m sitting here waiting for FedEx, UPS and USPS to show up with early birthday gifts to myself. Shopping online is way too easy. Coming today are my iron bed in a gun-metal gray (a new twist on a very old style), a box spring wrap (a new twist on bed skirts) a blanket and another set of sheets. The blanket I bought at Bed Bath and Beyond might go back, if I like the one coming from Amazon better. That store was a disappointment when I shopped it last week. They’ve enlarged a makeup section and cut down on the selection of towels and sheets. I guess makeup qualifies as “beyond” but most people think “bed” and “bath” supplies when they go there.

On my library shelf I have an 1895 Montgomery Ward and a 1905 Sears-Roebuck catalogs left over from an era when I day-dreamed that I was going to write historical romance novels. As much time as I spent studying those catalogs you would have thought I was living back in those times when ordering something took weeks to get delivered. Now you order, and two days later it arrives at your door. How cool is that! Over the years those catalogs have come in handy for identifying stuff we’d find in our travels. If no one could tell us what something was, there was a good chance it would end up in my husband’s collection. Sometimes it would take a few years, but eventually we’d figure it out, although I still have two things in the house that are mysteries. Even today I get a kick out of looking through those catalogs. You never know when it will come in handy to know that in 1895 you could buy a yard of 1¼ inch Irish Point Cambric Embroidery stitched on a three inch cloth for seven cents. Okay, so I’ve never actually been able to work that fact into a conversation, but I’m hopeful that day will come.

Back on topic. Here’s the deal. The bed comes today (Thursday as I'm writing this) and Saturday the guys from the service that Wayfair hooked me up with will come put the bed together. The mattress place only delivers to my area on Tuesdays and Friday so I’ll be in a holding pattern where I’m sleeping on a twin bed in the same room where my new bed will be set up. Tuesday the son-I-wish-I-had will be back to pick up that second twin---he’s already picked one set up to make room for the new bed. He has two sets of twin grandkids and they will put my old bed frames and mattresses to good use. Confused? You’re not the only one.

With the painters then all the other stuff going on poor Levi has been confused and out of sorts. I used those twin beds shoved up sit-by-side and he's been sleeping on Don’s side since a few days after he died. The first night with only one twin in the house Levi tried to claim it as his. I made him a nest on the floor next to the bed but he wouldn’t use it and there is no way I was going to sleep on a crate liner with a cushy blanket on top. It took him a half hour of pouting and pacing before he finally acknowledged me as the alpha member of our pack and went to the living room to sleep on the couch. The second night we agreed to share the foot end of the twin, but I was so afraid I’d fall out of bed that before I fell asleep I woke him up and made him move. He rearranged the nest on the floor, laid in it for two minutes then left to sleep on the couch. By the time he gets used to this temporary arrangement, the new mattress will be delivered and he’ll be confused all over again.

Here's all the photos of the finished bathroom redo: