Project What Did I get Myself Into! 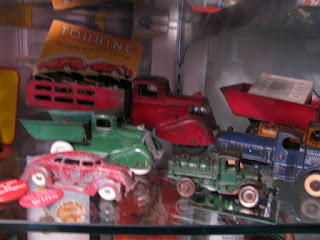 The fear of moving---more accurately I should say the fear of not being able to downsize everything in time---is setting in. Before they changed the move-in date to the continuum care complex (known as the CCC after this) from fall of 2020 to the spring I was calm and I thought it was doable. I would have had all summer to downsize collectibles, and next summer to get the house up to snuff, sell furniture, get the house, listed and sold. Now, the major stuff outside like staining the deck has to be done before fall, I have some trim to paint and the beds around the foundation need thinning. And I have to decide if I should re-roof now at pre-China tariffs prices or wait and see if the roof passes the inspection and chance paying 30% more at post-tariff prices. I have an appointment next week with the realtor the CCC place works with and I hope to get answers to that burning question and one I have about whether or not banks are still doing bridge loans. I may need one to make this all work with the shorten time-line.

In the meantime, I’ve downsizing on e-Bay until I can get hooked up with a quicker method. One thing I just sold was my Pendleton twin bedspreads left over from redecorating project last winter, got $350 for them plus shipping costs. I really didn't want them to go to Goodwill and I found the perfect buyer. She had a set just like mine but lost them when her house burned down in one of the big fires Out West. (I was sentimentally attached, but after hearing her story I'm thrilled they could make someone as happy as she was to win the auction.) I got another $271 for an 8” Texaco sign that hung in our bathroom before I went all girlie in there. And the ladies/men Texaco signs I also had in our master bath went for $77. Right or wrong my thinking is to sell off the rest of my husband’s gas & oil memorabilia collection before the downsizing specialist (who from here on will be known as D.S.) gets her thumbs in my pie because she won’t have a clue what she’s looking at and won’t care if guy-things have value and she tells me to trash it all.

Speaking of the D.S., I have an appointment with her next week, too. I’m at such a loss on how to proceed and I need a second opinion/battle plan. I’m not worried about normal household stuff. I can sort out the ‘donate’ or ‘trash’ stuff from the estate sale stuff. Lord knows I’ve been to enough of those kinds of sales to do that. But it’s the sheer volume of highly specialized collectibles and art I’m worried about selling. D.S. people charge a referral fee anything they help you sell plus the estate selling or auction services they hire does too, but 50% of whatever is better than paying a junk man to pick it up. The son-I-wish-I-had is in that line of business---picking up stuff left over from estate sales---and he makes a good living doing it.

I haven’t ask my pseudo son yet but I’m hoping to barter with him to sell and ship four very heavy/pricey items that will require a freight company to pick up if sold on e-Bay in exchange for an antique air meter he’s been lusting after since my husband died. He should jump at that barter because the air meters usually e-Bay for 1,000 to $1,800. For one, he deals with freight company pick-ups and e-Bay all the time and we’ve been bartering back and forth for decades. I should have let the air meter go the first year after Don died when the other big stuff got sold. But emotions got in the way. Having the air meter restored was the last Christmas gift I gave him---just a month before he died.

I had lunch with my Gathering Girl pals this week and my mouth was running a mile a minute. I couldn’t help it! They offered to help me if I have a garage sale, which was a sweet surprise. But I’ve lost faith in garage sales being worth the time, opting instead to donate to Goodwill or Salvation Army but Trump took away the tax write-offs on donations so that’s a bummer. By the way, when you donate collectibles, etc., they never make it to the floor. They’ve gotten smart over the years and now have online sells divisions.

Can’t wait until next week’s appointments with the realtor and the D.S. In the meantime I have two fun appointments this week: one a meeting with some of my future neighbors for a “guided conversation” at the CCC and one with my niece who is coming up to tour the CCC. She will go home with the table and chairs my brother and I used when we kids. Anyone I see or visit before I move gets a door prize when we part. ©