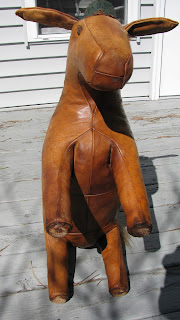 I’m quickly falling in love with selling stuff on Facebook Marketplace although I’m still struggling a bit with learning the ropes so that I’m not getting overrun with messages of offers. One thing I’ve learned is I need to be up and presentable for pickups before listing something because the serious Marketplace buyers want to come over right away, presumably to nudge the competition out of the running. But unfortunately it took me two weekends to figure out not to list two things within a few minutes of one another because all the action comes within the first two hours and having multiple messenger boxes open up across my screen stresses me out. One time I sent a reply meant for a person asking a question about a small showcase I had listed to a guy asking about a leather donkey footstool. (This was the second showcase I've sold on Facebook and it's the one that held my collection of spaghetti poodles.) This showcase went to the owner of an antique store who offered me twice what I had it listed for. Before she came out to pick it up I quickly staged my work table in the garage with some things I’d hoped she’d be interested taking.

But the thrill of the weekend was selling my prized donkey. I really didn’t want to sell him for peanuts or send him off to Goodwill and the high cost of shipping would have killed his sale on e-Bay not to mention he’s a little rough looking due to Levi having pulled his tail and ears off several times when he was a young. I got them back on but the tail was significantly shorter and thinner. The ad I wrote described my donkey this way: “This vintage leather, donkey footstool will add a sense of whimsy to any room. He measures 27” from butt to nose and is approximately 9” wide. His leather shows some stains and he has some age-related issues with his ears and butt but who doesn’t when you’re over 80 years old. (See photos #7, 8 & 9 of those flaws in his character.) Help me find a home for this much loved guy. He can't go to independent living with me.” I asked the young man who bought him if he collects or owns a donkey. Nope. He said he and his wife are slowly furnishing their home with Mid-Century, unique things. Bless those Mid-Century collectors! I see myself in them when I was hot and heavy over Early American primitives. I wanted to kiss him goodbye---the donkey, not the buyer---but I resisted the temptation.

By the way, a collection of 6-7 of those primitives are going with me when I move...whale oil and other small lamps from so many centuries ago. But did I mention that I also sold a dozen cobalt blue wine bottles that were on my bottle tree in the back yard? The girl who bought them is using them with lights inside for her wedding this summer. That appealed to the old florist buried in my distant past. And, no, I didn't get those bottles from drinking that much wine. Some I fished out of the recycling dumpster and some I bought off e-Bay. Cobalt blue is a much sought-after color in the world of weddings according to my hairdresser.

For those of you who are concerned with strangers coming to the house. They don't actually come inside. I have a large overhead garage door that I open and I have pickup items just inside that door. One time I counted how many windows in the neighborhood have a direct view inside my garage and it's a LOT. I'm on a slight hill and my garage is a regular fishbowl. I also make sure I leave a note on my day planner and one other place about who is coming and why for the CSI team that might have to solve my murder. No one is completely anonymous on Facebook or e-Bay if someone has a crime to solve. Pickups are really no different than having a garage sale, except you're only sharing your address with the buyer and not the general population.

On the art/e-Bay front, I sold a sculpture for a HUGE chunk of change and I have two similar pieces to list as soon. The buyer turned out to live in Michigan, too, and she has memories of going to the artist's studio as a kid to watch him work...she lived nearby his place and is eager to see my remaining two sculptures. Fingers crossed she's got good credit or a disposal income to buy them. This gal and the donkey guy gave me hope that the world isn't getting run over with minimalists and fan of Marie Kondo.

Next week I'm signed up to take a virtual tour of my future home---the buildings inside and out and the campus. And in April I'm signed up to do an in person tour and the son-I-wish-I-had and my niece both want to come with me. They are in full marketing mode to fill up the unsold units. There media ads are everywhere and every week starting in April they will be doing small group tours and will have a sample unit finished and furnished to view.  It's getting real, people. ©

Email ThisBlogThis!Share to TwitterShare to FacebookShare to Pinterest
Labels: downsizing