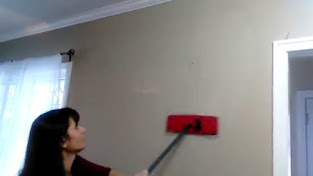 Aside from having two rail-thin women come to the house to wash my living room and dining room walls, it’s been a week of few accomplishments. How thin is rail-thin you ask? If either one of them ate a grape she'd looked pregnant, but boy were they hard workers. They knocked that huge job out in one hour, fifteen minutes (each) and it only cost me $75. The place smells Spic & Span amazing, looks even better than I’d hoped because we ‘de-cowboyed’ the place as we went along. De-cowboying the place consisted of taking down a series of small, scratchboard portraits of cowboys playing poker and a couple of sun-bleached animal skulls and moving some western sculptures into the library where they'll wait to get listed soon on e-Bay.

I still have six larger signed and numbered western prints hanging on the walls---most by well-known artists but they are staying, probably through the open house. Not sure yet. The realtor thinks they should stay---it's too big a wall to be empty---but if I can sell them beforehand, I might. One of the prints, a large Paul Collins lithograph drawing of the legendary Holy Eagle, I’ve always said I’d push it around in a shopping cart if I was ever homeless and I’m still hoping I can find room to hang it in my future home. I’ll have to see where the light switches in my new place are at before I’ll know one way or the other. It doesn't fit the beach cottage theme I want but maybe I'll have to pretend the old guy is my great-grandfather.

The two women have been in the cleaning business for a while now but I taught them something. They started out just using rags and a tall ladder so I dug out my round-headed mop and showed them how they could do most of the walls without using the ladder. After doing the rooms with my mop they were so impressed they said they were going to buy themselves a couple of mops like mine. Even with my cathedral ceilings it only took a step stool for them to reach the peaks. It was quite the time saver and safer not to have to move an eight foot ladder around.

Then they impressed me with their method of cleaning glass which truly amazed me. Over the last few years, I have not been able to get streaks out of windows and I couldn’t decide if they’ve change the formula for Windex that I’ve been using since I was big enough to help my dad every spring and fall with the Storm Windows Project or if paper towel is being made differently causing the problem. I suspected it was the Windex because even using the old stand-by of newspapers wasn’t doing the trick. Nothing short of going over the streaks with vinegar on a soft cloth helped and that was slow going. The ladies were using Norwex cloths with just water, no Windex or other cleaning product and getting the glass on my art prints to shine, streak free in just a minute or two. The stupid cloths cost a small fortune but as soon as the reward points show up on my Amazon card from paying for Levi’s last day on earth I’m going to invest in a Norwex glass set at the tune of $34.00 for two cloths.

It will be weird spending all those reward points and I wish I needed something big and costly so I could spend them all at once, get it over with like pulling a band aide off. Gee, your dog died? Here’s a bunch of free stuff from Amazon as a reward. I just thought of something costly...a new cell phone but as often as we need our phones, do I really want to be reminded of how I got it, if I use my rewards points that way? It’s my mom’s fault. She’s the one who taught me how to save and pigeonhole money for certain things. Moms are always to blame, no matter what. In my entire life I've always thought in terms of I bought that with the money I got doing this or selling that. And paycheck money was always used for the 'needs' in life, and money that came from selling stuff or doing odd jobs could be spent for the 'wants' in life.

I got the sweetest sympathy card from Levi's vet. Inside it had a piece of pressed cotton in the shape of a paw that said "Plant me, I will bloom." It's full of wildflower seeds. It took me back to the day when we spread my mom's ashes with a box of 1,000 wild flower seeds along side a walking path my folks frequently took around our cottage. I think I'll plant Levi's seeds at my future home. On a 40 acre campus with woods and a lake I should be able to find a place I can sneak them in. How cool would that be.

I’m doing fine, although this past week has zapped all my energy as I try to re-imagine what my future will look like---with or without another fur baby. I don’t feel like I have a lot of time to decide because if I’m going to get one I should do it while I’m still living in a single family home where training would be so much easier. © 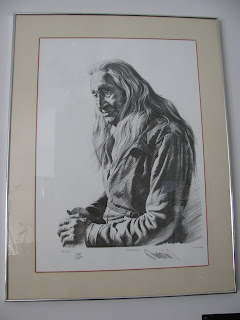 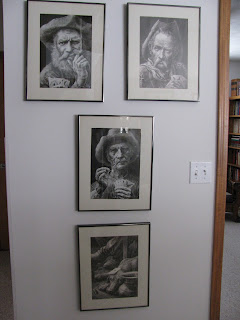