The Happiest Day of my Life 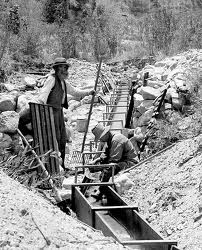 I wish I had a better memory or I would have had the foresight to keep travel diaries when Don and I took vacations. In my defense, I never needed to keep track of the pesky details of our trips because Don could be counted on to be my living, breathing encyclopedia. If he was here right now, for example. I’d ask him if it was in Central City, Black Hawk or Cripple Creek Colorado where we found ourselves on a Halloween night with nothing but fumes in the gas tank. It was one of those little boom and bust towns high in the Rocky Mountains back in the days before they became tourist destinations. That happened more recently after the state legalizing gambling in their historic goldmine districts. What ever town we landed in on Halloween, back then there was only three ways to get to that town: a narrow gauge railroad, a two lane road that wound its way through horseshoe curves with a mountain on one side of the road and a drop off without guard rails on the other side, and a far less dangerous road going out the other side of the town. We were young and stupid back then or we never would have taken that mountain pass---especially after dark----and we never would have driven past a sign by a gas station proclaiming it was the last chance to buy fuel for x number of miles.

Let me tell you, we were never so relieved to see a gas station in our entire lives and as far as Halloween memories go, that night created some of the best. Inside the station was a table full of popcorn balls for trick-or-treaters and when Don tried to buy one, the lady explained they had 27 kids in town and only 27 popcorn balls. ("No popcorn for Don!" as Seinfeld's soup Nazi might have said.) We had a 50 gallon auxiliary gas tank on the pickup and it took a long time to pump 49+ gallons so we were there a long while, and as we waited Don handed out popcorn balls while the proprietor took Polaroid pictures of the kids for their bulletin board. That was small town America at its very best.

Our next stop in town was to the only other business open that night---a bar inside of an old three story hotel built in the 1800s that no longer rented out rooms. It was a beautiful building with ornate carved wood everywhere and it had a staircase winding upward to a sky light framing a full moon. No among of talking on Don’s part could get the owner to let us stay in one of those rooms upstairs but he did get us invited to stay overnight in the private home of a patron of the place. Don would have taken up the offer, I’m sure, if he’d been alone but all I could think about was the Bates Motel and getting killed by a psycho while taking a shower. No, that night it was sleeping bags under the stars for us.

The next day we spent roaming around the town, talking to the residents and soaking up the history of their heyday of gold mining. We even spent a fair among of time sitting on a huge pile of dirt at the mouth of an old mining shaft, sifting for gold that some how---we thought---had escaped the eye of hundreds of other people in the hundred years since that mine was active. It doesn’t sound like much to tell the story but that afternoon, sitting there in our flannel shirts and jeans, the sun overhead and the smell of fall in the air was the happiest time in my life. We were young, crazy, newly in love and we didn’t have a care in the world. We were letting our imaginations run wild picturing ourselves alive and living a hundred years ago and also trying to figure out how we could buy that old hotel in town that was up for sale for ridiculously low price, especially considering what has become of that place since casino gambling gave the area another boom.

People in the widowhood circles I’ve come to know all seem to name their wedding days as the happiest day of their lives. And of course, everyone else immediately understands the reference---the emotions and commitment a day like that represents. I usually don’t say anything when this topic comes up because there is no shortcut to understanding how sitting on a pile of dirt in the mountains of Colorado could be the happiest day of anyone’s life. But it’s the day I keep coming back to when I think about Don’s and my life together. Even when people see the gold miner’s pan filled with rocks, fool’s gold and unpolished rubies sitting on the dinning room table no one could ever guess that it’s the equivalent of having wedding day flowers pressed between the pages of a book. They’re the souvenirs we brought back from a trip we took to heaven on earth. ©
Posted by Misadventures of Widowhood at 2:04 PM