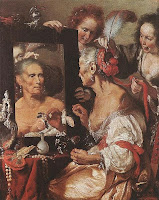 In recent weeks I’ve become obsessed with my skin. My face is full of lines and wrinkles and suffers from years of neglect. So what’s the problem, you’re thinking, two out of three of those things are age appropriate, aren’t it? Well, yes, they are however my mom had skin like a porcelain doll when she was my age and I’m bemoaning the fact that mine isn’t. Apparently flawless and fair English skin skips haphazardly through the generations. My famous Colonial era ancestor---whose portrait hangs in the National Portrait Gallery in Washington D.C.---plus several great-aunts, my mother and one of my nieces are all skin twins. Why not me? I share the same gene pool. It isn’t fair.

One day I was in the facial products isle of the store when I spotted what is essentially a power sander for your face and after seeing a second brand of the same type of tool I decided it must be the latest and greatest gadget designed to take dollars away from wrinkly old people like me. What the heck, I thought, it’s never too late to start caring about your skin. So I bought a face sander. The second time I used it I got too much water on the disposal pad and some of the micro-derma abrasion in the pad dripped into my eye. Let me tell you, it hurt almost as much as the time I Crazy-Glued my eye shut. But I was undeterred. The next time I used the mini power tool on my forehead I got smart and held a washcloth along my eyebrows to catch any drips.

I am in week two of my of skincare project and I can see a difference but not enough difference to make some old dude at the senior hall want to eye-hump me from across a room. That’s a joke. Old dudes can’t see that far for one thing, and for another I just heard that term for the first time a few days ago and I’ve been wanting to use ‘eye-humping’ in a sentence every since. It makes me laugh---maybe because ‘hump’ was my late husband’s favorite euphemism for sex. Besides, at the senior center there are ten plus women for every guy so if I actually did want to get eye-humped I’d have to stand in line. There are some beautiful, slim trim and well-put-together women in my peer group. Although I must say some of their conversations are lacking. For example the last time I was there some of the women at my table were talking about jewelry brands until my eyes crossed and I wanted to scream, “Who really gives a flying fig!” Apparently the answer to that question is at least four out of  the 109 women who were in the hall that day.

The box my power sander came in---it’s actually called a micodermabrasion system---makes many claims about reducing pores and age spots leading to smoother, firmer skin with less wrinkles and a luminous glow. All that for twenty-one bucks. What’s not to love about that prospect coming true in six to eight weeks? But with my luck and enthusiasm for the product I’ll probably end up sanding all my facial features off and no one will recognize me without my nose and high cheek bones. I’ll keep you posted.

Fall is approaching. I hate that. Do I want to see my first gaggle of geese heading south? No! Do I want to see frost on the pumpkins or radiant colors in the trees or any of the other sights that inspire poets to form pretty sentences on paper? Hell, No! I want time to stand still, to stop its march across my life. I want. I want. I want. Do people ever quit wanting what we can’t have? I suppose, though, if we were predisposed to never want change mankind never would have invented hand tools or the wheel and I’d be in a cave right now drawing on the walls while waiting for the mud mask on my face to dry. What? Even cave women must have wanted to look good. Why else do you think they invented the comb and leather thongs? ©


Painting above:  Old Woman at the Mirror by Bernado Strozzi
Posted by Misadventures of Widowhood at 8:00 AM