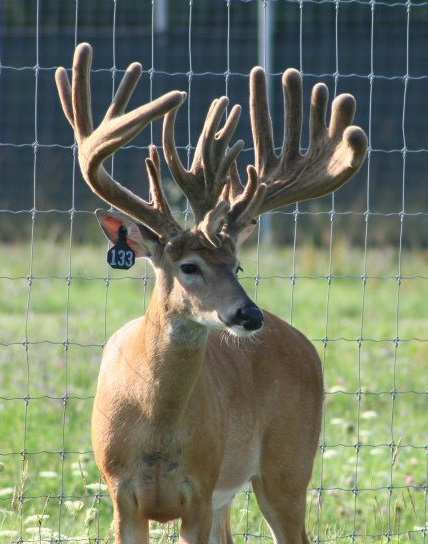 Saturday’s Red Hat Society walk-about was out to lunch and to a deer park out in the boondocks and this time I volunteered to drive. I leave the maze of confusion downtown---where many of our walk-abouts take place---to the women who spent their working lives down there. Lunch was at a slightly run-down place in the middle of nowhere but their food was good, cheap and the waitress worked her tail off serving the twenty-two of us. I've always said if you ever see me working as a waitress you’ll know I'm down to my last dollar because that job rates lower and harder than cleaning toilets for a living in my Book of Possible Occupations. But that’s coming from a woman who cut her feminist teeth back when getting coffee for your boss first became a bone of contention. I’ve never liked waiting on able-bodied people which is one of the reasons why my inner Martha Steward never showed herself long enough to enjoy hosting dinner parties.

The deer park, our main destination, struck me as a sad place to go in the fall. The lobby of place was filled with taxidermied animals not native to Michigan or even to the U.S.A. in some cases, and there were teenagers going around taking selfies of themselves with the bear, water buffalo, lions and tigers. The deer park is a “working farm” so called because they sell their deer, yak, reindeer, elk, goats, and donkeys. For meat? For trophies? For novelty farm animals? I wanted to know but didn’t ask and no one else did either. I suspect many of the animals end up at “canned hunting” clubs where they shoot nearly tame animals that step out of cages---preselected animals priced by the size and beauty of their heads and racks. To me, that kind of “hunting” should be illegal but too many wealthy people support the industry so there’s not much chance that will ever happen. The deer at this park have the largest antlers I’ve ever seen on Michigan deer. The tour guide said that’s because they live a stress-free life and have good nutrition.To bad that doesn't work for a woman's "rack"...that sure would be cheaper than plastic surgery.

In one pen we saw 20-25 albinos, babies mostly, with the cutest pink noses and blue eyes and we got to hand-feed them. Same with the reindeer herd. The minute our “stage coach” pulled up to the fence, they came running across a long field to munch handfuls of soybeans from those of us willing to get reindeer slobber all over our hands. The guide said if we go on one of the spring tours it’s not unusual to see 8-10 births taking place. We did get to see some girl deer pee and they do it just like dogs. Who knew. All totaled, we probably saw two hundred animals at the farm, playing $8.50 each to take the tour. (Note to Nancy: You could be charging your friends and family to watch the deer you try so hard to keep on the other side of your deer netting.)

I’ve got one more week of being crazy-busy then things will start slowing down for me. When October gets here and I’ll have to get my yard and house ready for the winter but in the meantime, I’ll be spending several days next week helping with the annual fund raiser auction for a small town museum. Mainly I’ll be putting my old floral designer talents to work making baskets up of items stores have donated. (Imagine fruit baskets and you’ll get the idea.) I also have a senior hall luncheon, a metaphors class and an important retiree’s union meeting where they’ll go over our healthcare changes.

Yesterday at lunch a couple of the Red Hatters were talking about the fact that they belong to two and three chapters and are on the go every single day. I don’t see where they get the energy for that. I miss being at home when my social life makes me feel like I’m living in a hotel, just home long enough to sleep and eat. But then I miss seeing people when I’m at home for more three days straight. Maybe I need to fine-tune the activities I’m doing? Maybe I just need an attitude adjustment? There must be people out there who would kill to have the time, money, health and opportunities I have to be as active as I’ve been this summer. I’ve always been a nester at heart. So how does that play into my discontent? Maybe everyone is discontent on some level, wanting what isn’t easily obtained? From the outside looking in, people see me as having fun and living a full life, but underneath the smiles and laughter is a sense of loneliness that I can’t seem to wrangle into submission. I wonder if my Red Hat sisters who belong to multiple chapters aren’t running from the same Ghosts of Widowhood that I am. Are we all missing the in-depth conversations, the trusted sounding board, that only comes with a good marriage/partnership so we’re trying to fill the void with activities?

Okay, I’m going to quit asking myself questions and go sort my dirty clothes into four piles---blacks, whites, reds and jewel colors. At least my laundry is uncomplicated. And trust me, I’m immensely happy my laundry piles don’t include adult diapers and dribble bibs. Life is good as long as I can still say that. ©

Note: The deer photo at the top was taken at the deer park and was typical of the racks all the males had. They also had some deer with only one antler which I learned grow on female deer that have high levels of testosterone. I really loved the way they looked, sporting that lopsided head gear.
Posted by Misadventures of Widowhood at 12:29 PM