Beating Dead Horses and other True Confessions from a Widow 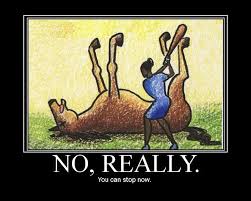 I have yet to meet a widow who doesn’t eventually get around to admitting that she still thinks about her husband often and/or she still misses him. It might be a fleeting thought or an all day long cry but it’s there waiting to judge us, if others found out. It doesn’t seem to matter if he died one or fifteen years ago, and no one should be surprised by that. They really shouldn’t! After all, something in our travels through life can remind us of parent, sibling or a best friend growing up and no one gets their dander up over those kinds of memories. But let a widow reveal she still thinks about her deceased spouse from time to time---even long for the old days when life was more idyllic---and that’s often viewed as “unhealthy” or “living in the past.” So we clam up from sharing what is going in our heads with people we know don’t understand and that puts a wedge where it shouldn’t be. (By idyllic life I mean we look at the past through the prism of time that filters out the petty quarrels over dirty socks on the floor, who forgot to lock the door, and farts in the dark with your head held under the covers. Why do guys think that’s funny?)

I’m sure there are exceptions to my unscientific observations about widows---the widows who were in unhappy marriages and may still remember but not in the I-miss-the-closeness kind of missing I’m writing about today. I’ll bet their memory triggers lead to rejoicing he’s gone or regrets about wasted time or memories they wish they could forget like in case of women who were abused. Memory triggers are everywhere. I once saw a yellow GM on the road that brought a flood of vacation “snapshots” in my head. Songs on the radio were big triggers in the first year. Even pot holes remind me of the summer I worked on Don’s parking lot maintenance crew. Thankfully, he gave up anything to do with asphalt after a few years because it was hard, dirty work and we were both still holding down other full-time jobs back then. Don was a workaholic, a byproduct of growing up poor with bill collectors pounding on the door.

I was a bit of a chameleon when I first met Don. We were 27 and 28 and I'd been in three serious relationships between high school and us meeting. And with each of the three relationships I hid my light and likes under a basket, so to speak, and became of fan of whatever those three guys liked. One was into tennis. I learned to play. Another was a skier and I took lessons. One was into playing cards with his unbearably boring family, and twice a week we went to the family card games. Sure, I still became interested in what Don liked doing BUT he also took the time to figure out what I was interested in and he encouraged me to follow my dreams. It was a regular mutual admiration society we’d formed. Looking back, I realize the three other guys didn’t know the real me, didn’t even try to peel away the chameleon layer. I was a Barbie Doll of their making. Hey, it was the early sixties, don’t judge me. Isn’t there a Bible scripture somewhere about a woman's role and place in a coupling that I may have misconstrued back then?

Back to the present: I’ve turned the corner on the mild depression that grabbed me by throat over the Forth of July. I’m walking again and have lost the weight my funk put on my hips. I’m back to healthier eating. I’m not listless anymore, not running on auto-pilot. My mojo is back! Hallelujah and praise the gods who look out for elderly women who don’t want to be swallowed whole like a guppy in a goldfish tank. That’s not to say the loneliness of widowhood is no longer there. It is. And it probably always will be. I also still worry about that day when I’ll need someone to take me to get a colonoscopy or cataract surgery and I have no close friends or relatives near-by to impose on or to call just because.

I like to believe there is a solution for every problem and I hope to find the answer to my no-close-friends dilemma next week when I’m taking a three hour seminar through a local college’s Olli Program titled, The Vulnerabilities of Aging: Laughter amid the Tears. I might still be lonely but I’m keeping busy and having some enjoyable days. My Fun with Metaphors class also starts next week so expect my writing to improve by the end of the month. I have high hopes I’ll no longer be beating a dead horse (aka a widow's unending lament about secret thoughts) when I write---and if you understand the first part of this sentence, you know more about metaphors than I do. ©
Posted by Misadventures of Widowhood at 4:42 PM