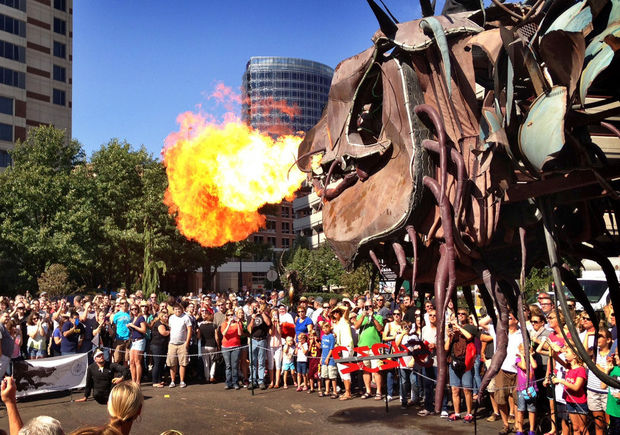 October 15th my lease will be up in the antique mall where I’ve had a booth this past year and since they are going out of business before the end of the year, I wanted to move out before we get into the unpredictable cool, wet and windy weather of fall. I could have stayed for a 50% reduction in rent but instead I spent a crazy long Monday packing stuff and wheeling and dealing with a friend (the son I wish I had) who used his truck to help me move all my things home. I gave him a 1940s coin operated motel radio/night stand for the use of his truck and he was elated. (I hope his wife feels the same way when he brings it home.) We never had the key to the coin box so he took the piece to a locksmith to see if they can make a new one. Part of the thrill of old things like that is the mystery of not knowing if you’ll find a rare coin inside. I hope he does. Then I traded him a hot fudge dispenser from a 1950s soda fountain for a set of snow shoes to go with my Adirondack backpack basket, circa 1900. He’s been lusting after the dispenser all summer and I’ve been lusting after the snow shoes. Bartering makes us both happier than exchanging cash. Most antique dealers are like people giving away a litter of puppies; we like to know when something has found a good home.

Moving out day I also sold a lighted showcase to a guy who will use it to display his hood ornament collection which turned out to be one of those happy/sad sales. Happy that a showcase I’ve always liked will be used in a way my husband would have wholehearted love and sad because the decision to sell it signifies a formal acknowledgement that I’ll never have a booth in a mall again. Having a booth when I no longer own a truck isn’t a good mix which is just a cop-out excuse so I don’t have to admit I’m getting too old to work that hard. All totaled this was my fifth booth and it was the least prestigious mall of all of them. Before my husband’s stroke we were in one of the biggest and busiest antique malls in the state---over 200 dealers all in one beautiful, well managed building. Those days were fun. The mall would throw huge Christmas parties for their dealers and customers to co-mingle and they’d have annual outdoor swap meets in the summers with pig roasts to feed us all. The owners also had an auction service and we’d often go to them as well. We sure accumulate a lot of memories in one life time, don’t we?

Tuesday I shifted gears and went to the senior hall to: 1) To hear a lecture on our city’s free public outdoor art, and 2) to register so I can vote in the world’s largest art competition hosted here in town. Art Prize, as our 19 day art competition extravaganza is called, is giving away $560,000 in prize money this year, half as jury selections by a panel of experts and half awarded by popular, public vote. (Ten cash prizes in all.) This year there are 1,536 entries that came in from all over the world. You never know what someone will call art. The most controversial piece this year is a collection of silhouettes of armed men standing on the tops of buildings downtown…totally creeps me out but the experts put it on their short list. I took the tour bus down last year to see the top 25 that resulted from the first round of voting but this year I’m having too much knee pain to get on and off the bus twenty-five times in two hours. Boo-hoo! (An appointment with my orthopedic doctor is coming soon to check on the knee replacement he did seven years ago.)

The guy with the deep pockets who has $560,000 to give away is the son of one of the co-founders of a local business that made their money making laundry soap. You guessed it, there’s big money in selling soap via a method that was once investigated for being a pyramid scheme. The Federal Trade Commission ruled in the company's favor, though, because the company had a little known policy of buying back unsold products. In a true pyramid scheme distributors are stuck with what they can’t sell. Still, everyone who lived in this area when they were first growing their business knew someone with a basement full of unsold soap. And you couldn’t go anywhere without a friend or relative popping their trunk open to try to sell you laundry soap or to try to talk you into becoming a distributor so they could become millionaires like the recruiting seminars promised to those who worked hard at bringing others into the pyramid. The company was, however, found guilty of “making exaggerated income claims” and they were ordered to stop but they violated that order several times and paid some hefty fines. Just think, I met the co-founders of that company back when we were still all single and all they had was a pyramid scheme---I mean a pyramid dream of getting rich. Hummm…maybe I should have titled this blog entry, Lost Opportunities to Marry a Future Billionaire. ©

Posted by Misadventures of Widowhood at 9:59 PM