Abortions: Past, Present and Future

I haven’t wanted to do this but here I am writing a post about abortion. I’m a product of the Second Wave of the Feminist Movement back in the ‘60s/‘70s and I fought for the Equal Rights Amendment (‘72) and I was invested in the outcome of the abortion issue (Roe vs Wade ‘73) having known someone who died from a back alley abortion, and I listened intently to the media when doctors, religious leaders and scientists presented their opinions to the Supreme Court on the topic of when life begins. From the moment of conception to zygotes to embryos to fetuses to birth---no consensus was ever reached on where life begins. All of these measurable benchmarks along the baby making process will become center stage again because certain forms of birth control will be classified as ‘murder.'

When life begins was not agreed upon back in 1973 but viability outside the womb has became an important medical standard and is set at the 24th week. Though, now, with the advances of ultrasound and neonatal care it’s a harder agreement to put forth and it gets stronger push-back on the time-line. Viable outside the womb is arguably lowing but at the tune of nearly a million dollars per baby in neonatal care. Then the argument becomes is being hooked up to machines actually a viable life? If we applied the same million dollars to a person near the end of life couldn’t we also change the life expectancy rates? I’m not saying we should or shouldn’t as a society force insurance companies and/or tax payers to take on these kinds of expenses, I’m just saying Pro-Lifers should also be willing to save lives at the other end of life as well as babies incubating in the womb. Cryogentics anyone one? We’re already freezing embryos and at what point does it become murder to discard the ones not implanted? Harvesting a woman's eggs becomes a next level legal issue with the no-abortions-after-the-sixth-week trigger laws in thirteen states that are set to enact if Roe vs Wade is overturned in June.

At what point when a woman spontaneous aborts through no fault of her own does it become murder if heroic actions aren’t taken in a neonatal care unit to save what Mother Nature expelled? How many of us would be in abortion prison right now if we couldn't prove a spontaneous abortion in the first twelve weeks wasn't planned? And will Pro-Lifers be there to help with the cost of a new wave of younger and younger neonatal babies? If we as a society are going to force pregnant women to carry to term why can’t we be forced to keep people of all ages on life-support until new treatments come along?  I’m being sarcastic with that last sentence, and I hope you figured that out on your own.

I’m getting lost in the weeds here aren’t I. The whole reason I wanted to write about the topic is to help rally people to wake up to the rights women and families are about to lose if we don’t start fighting back. The Far Right has been planning this attack on Roe vs Wade for decades, they’ve been playing the long game getting sympathetic-to-their-cause judges installed at all levels and they’re well organized.

Probably most people who are reading this are past the age when pregnancy is possible but we have come too far to turn back and we owe it to the next generations of women and men who want to plan their families to speak up. Pro-Choice means just that. If you don’t want one don’t get one, but don’t send other women out to the back alleys where the procedure was too often done with wire coat hangers and knitting needles.

I knew a girl who died from a botched back alley abortion. Her father took her and her father was the 'man' who impregnated her. Why isn't punishment for men not part of the Pro-Life proposed punishment laws? Women don't impregnate themselves. At the very least men who cause unwanted pregnancies should have their abilities to have an erection taken away chemically for nine months. And just to be clear, I'm not being sarcastic here.

Abortions have been taking place since biblical days when dropping large rocks on a woman’s stomach was the preferred method. No matter how many Handmaid Tales-like laws they put in place women in desperate situations are going to find a way to undo a pregnancy. Our battle cry back in my day was “keep abortions safe, legal and rare.” If you agree spread it around and don’t be quiet about it.

If you don’t agree, I’m like the shingles commercial that keeps repeating shingles doesn’t care. I don't care if your church says it's taking a life. I don’t care if you had an abortion and regret it. All tough decisions come with regrets, with what-ifs. Women who’ve given babies up for adoption have regrets, too. Women who’ve kept babies they didn’t want don’t always learn to love that child unconditionally. There is no perfect choice, one without painful reflections before and after. And this should be a painful choice but its one each woman should be allowed to make for herself.

In late June the Supreme Court is ruling on a case that could overturn Roes vs Wade but a leaked draft of that ruling shows the majority of justices are willing to do just that. There's no time to waste if you want to add your voice to the fray. A draft is not a ruling and there is still time and a slim chance we can influence the justices on the court. ©

* Photograph at the top by Anna and Elena Balbusso 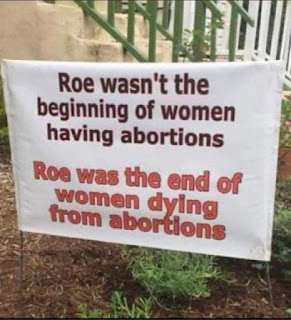