Pardon my French and other Colorful Euphemisms 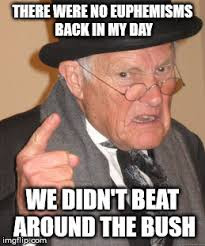 My husband used the euphemism I have to go see a man about a horse when he needed to use the restroom and we were in ‘polite society’ which is another euphemism meaning in today’s world we were out in public but in ye olden days the phrase polite society had more to do with having a so-called superior set of standards for behavior brought to them compliments of their wealth and breeding. As a man, for example, you’d never think of even whispering the word ‘sex’ to others of your social standing but forcing sex on a lowly housemaid was a different ball of wax. Though I suppose that example would be more along the lines of a dichotomy? Either way, there was a time when you could use the term ‘a different ball of wax’ and everyone knew you were talking about two things that might seem the same but were completely dissimilar. But I was shocked to learn that in today’s world you have to be more careful throwing the term ball of wax around.

The urban dictionary is claiming a ‘ball of wax’ refers to the crud that builds up under a man’s balls when he hasn't bathed in a few days. I could have gone on playing the euphemisms game all day long if not for that bit of information. For one thing, I didn’t know that crud built up there and two, now that I do I can’t help wondering if there is a euphemism for the crud that builds up under a woman’s breasts when she’s doing manual labor in the hot sun. I spent the summer one year working on my husband’s asphalt paving and patching crew and I learned all about sweating my balls off which is another idiom my husband often used and in case you’re dumber than a box of rocks that means it was hotter than Hades. Side note: Does this whole paragraph remind you of belly button lint? Or is it just me?

I love idioms and euphemisms but they’re supposed to be a lazy man's verbiage. Still I don’t care. I don’t think I could talk without them and it’s common for me to edit one or two out of posts I'm working on because I do try to follow the rules of good writing---well, except for posts like this when I’m in a silly mood and I want to play with words, maybe make you smile or remind you of a phrase someone from you past was fond of saying. It's fascinating that word usage can sometimes remain the same for centuries and other times words can completely flip in its meaning. I’m over the moon for internet websites devoted to doing deep dives into where and when certain sayings and word usage started.

Shakespeare coined a lot of our English phrases like the green-eyed monster and wear your heart on your sleeve that both came from Othella. Love is blind and in a pickle both debuted in The Tempest. It’s all Greek to me appeared in Julius Caesar and a wild goose chase is from Romeo and Juliet. A method to his madness is something that reminds me of my mom and it’s from Hamlet which was written in 1602. 1602. I had to write that again so you’d know It’s not a typo.

Disney is probably the most comparable we have today to Shakespeare in terms of influencing a large market to use catchy phrases from their prolific bodies of work. And we’ll have to wait around a few hundred years to see it lines from Disney films endure the test of time. But I predict little girls who grew up singing Let it go with Elsa from Frozen will be be using that phrase as a coping tool their entire lives and passing it onto their grandchildren. But in our world things come and go in our media at a faster pace than in Shakespeare’s time and catchy phrases don’t have as long to peculate and take roots in society before another shiny new penny comes along to replace it. Did you know, by the way, that the Shiny Penny Syndrome is a real thing? It refers to when we get distracted by the newest whatever---the latest technology, a flirty party girl. Something that keeps us from sticking to our goals as in, “You won’t get far in life if you’re always chasing shiny new pennies, son."

Back to my husband: I used to think it was a family idiom he was using about the horse. He was raised on a farm and they had work horses but the see-a-man-about-a-horse euphemism dates back to at least 1866 when it first appeared in print. In 1939 it was heard in a NBC radio program and during prohibition it was commonly used when a man was going to the back room of a super club to have a drink of bootleg booze. As euphemisms for using the bathroom go, I’ve always been grateful my husband didn’t use take a piss which I’ve noticed lately is showing up on TV---the phrase, not the action itself---and I hate that P word more than the other P word. Now if you’ll excuse me I have to go powder my nose. ©