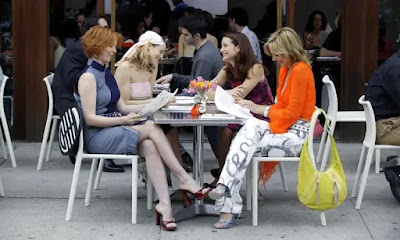 Sunday mornings are always quiet around here. Few things are on our otherwise busy schedule and the church goers flee the place like rats on a sinking ship. Even the dining room has so few reservations it’s always subject to be closed and they’re only open between 9:00 and 1:00 to begin with, to serve breakfast only. I sometimes go on Sundays because if you don’t order the mimosas with your breakfast it’s a pretty cheap day to eat in the fine dinning room. I’ve never had a mimosas in my life but before I die I want to try one while pretending I’m sitting at a table with Carrie Bradshaw, Samantha, Miranda and Charlotte---Sex in the City characters in case you're not into pop-cultural icons.

It takes a good imagination to whip those ladies up in an independent living complex but I keep thinking there are some people living here who could have been prototypes for the TV series characters. There is one lady here who is very much the fashionista that Carrie was but she’d much classier than Carrie could be even on her best day. There is no shortage of fashionistas here but there is only one who is tall and willowy and you have to do a double take to realize she’s old enough to live here. I don’t care how good your clothing is made or how fashion forward it is, if your shoulder stoop and you’re carrying a menopausal belly around that’s what people will see before your fabulous outfit.

If we have any Samantha’s here they are good at covering up their wild pasts but we do have a Miranda or two who are cynical and angry with the world but caring to their friends. Charlotte’s would be the most common however. Somewhat naive, marriage-mind, preppy looking ladies who may have experienced a bad marriage before finding true love with a man who, like Charlotte, they wouldn’t have given a second look at before their first divorces. Charlotte’s upper class upbringing could be duplicated here too. One woman in particular seemed highly insulted when I asked her what she did for a career before retiring. “I’ve never worked a day in my life,” she boasted. Okay then, I thought and that was the end of any conversations we had that day.

A few weeks later Ms. Never showed up to watch us play Mahjong when we players present were all trying to decide if we should wear masks because three people on campus had just gone into quarantine with Covid. Those in quarantine had all had breakfast together including Ms. Never. I pointed that out to her and asked if she’d been tested. “I’ve had Covid already and they told I couldn’t get it again so I don’t need testing.” I asked her who “they” is and after asking three times she finally answered with a fellow resident's name. “Well,” I replied, “until Kelly shows me here medical degree I’m wearing a mask around you.” Ms. Never actually laughed along with everyone else and we all ended up wearing our masks to play Mahjong.

The next week at Mahjong I managed to put my foot in my mouth and hurt someone’s feelings. Big time. Okay, let me just say that I think she was being very thin skinned but still it was a good reminded that I need to check my sense of humor here. This is what happened: While we were playing I asked the others to give me a minute while I decided if I wanted to pick up a discarded tile or not. Ms. Hurt says, “I suppose we could give you a minute” and without thinking I replied, “Says the queen of hesitation.” The other two players laughed (because she really does take three times as long to play her turn as the rest of us) but she went on and on about how if she’s taking too much time to play she can find something else to do with her time on Wednesdays and how she doesn’t want to play with people who talk about her behind her back. Blah, blah, blah and yadda, yadda, yadda all rolled up together for the next ten minutes. In there some where I apologized a couple of times and tried to explain it was just a joke and the other ladies apologized for laughing. Finally she wore herself out and we played in total silence for a while before I tried to break the ice by saying, “I like it better when we talk while we play.” It worked, we started chatting again but she also started making barbs like "I hope that was fast enough" after she'd discard a tile. When we were packing up the game I apologized again.

Walking back to my building with the woman who got Mahjong on the schedule and taught us all how to play I said, “I hope my joke doesn’t result in Ms. Hurt dropping out of the game. I truly like playing with her but I’ve apologized three times and I don’t know what else to do. She clearly is still nursing a hurt.” Teacher says she and her husband have quick senses of humor, too, that gets them in trouble from time to time. Don’t worry about it. If she doesn't come back, oh well.” I never would have guessed this woman was so thin-skinned but I’m finding out I’m living with some powder puffs.

And sometimes those powder puffs make me I feel as jaded as Samantha because I’m far more worldly than some of my neighbors. For example, a group of eight of was sitting around one evening and one of the women asked if anyone knew what going commando met and I was the only one who did! They didn't believe the phrase has been around a long time so I looked it up after I got home and found out Joey on the sitcom Friends was the first character on TV to say it (1996) but the term as been around since the '70s made popular by U.S. soldiers fighting in the jungles who would forgo their underpants to increase ventilation to prevent fungal infections. How could a term like that be around for so long and me be the only one out of eight to have heard it before? Sometimes I feel like I'm living in a convent. ©

Email ThisBlogThis!Share to TwitterShare to FacebookShare to Pinterest
Labels: majhong, sex and the city