The Saving Grace of Wishes Not Granted 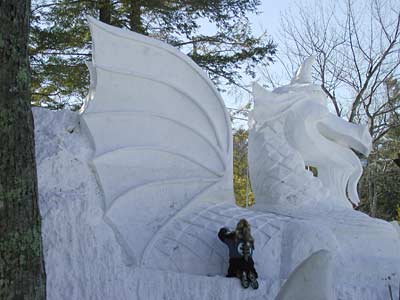 I live in the middle of a cul-de-sac. The end of the street that opens up to another street is lower than the other end which gives me a good view of six or seven houses downhill. From a distance I can watch kids playing in the snow, parents going off to work and people walking their dogs on the icy sidewalks. It’s like they’re all living in a snow globe, in a world I’m not part of and can never be again. That’s a false declaration but no one said logic was going to be a part of this post. I’m old and I’m allowed to take liberties with the truth. The fact is no one has me chained to my bed. I could go outside in the winter. I could walk my dog. I could even start a snowball fight with kids a fraction of my age. Sure, I’d have to ignore my osteoporosis, chance falling down and breaking a hip. But old doesn’t translate to stupid, so I stay inside in my safe little cocoon, protected from life… or rather protecting me from a life ending up in a nursing home which usually happens after an elderly woman breaks a hip.

It must be nice to have grandchildren you can use as an excuse to go outside and play. I’m quite sure if snow sculpturing had been as popular when I was young as it is now I’d have been building dragons in my front yard. If I had grandkids I could park a lawn chair in the snow and direct them on how to pack the stuff, carve out a mythical figure, dye the scales and fiery tongue and then soak it all with water to freeze the creature hard so it could greet anyone who ventured up my cul-de-sac until springs comes along. Sometimes when I look out the window and the yard is full of snow I have an overwhelming impulse to go outside and at the very least, build a snowman. I used to love winter---building snow forts with my brother, ice fishing with my dad, ice skating at our cottage, sledding with my nieces and nephew and then after I met Don, snowmobiling on the wooded trails that go on for miles here in Michigan.

And how could I forget those two years when I was in college and I tried to like snow skiing because I had the worst crush on and was dating a guy who had a passion for the sport. Why couldn’t he have liked cross-country skiing instead? I could have stuck with that sport after we broke up. He never got married, by the way. Turns out he was an in-the-closet gay guy who was trying as hard to like girls as I was trying to like downhill skiing, a fact I didn't learn until a decade later. He’s one of the reasons why I’m so happy that gay people are freer, now, to come out of the closet and be accepted. I think about the unhappy life I could have had if I had married him, been his cover for a secret life that didn’t get exposed until half our lives were over and I’m grateful for the saving grace of wishes not granted. How many women did that happen to, Dr. Phil, back when I was young? How much did that kind of marriage destroy a woman’s self-esteem before the truth finally came out? One could view those years we dated as wasted time but in hindsight they gave me more empathy for a segment of society that could use all the empathy it can get. It’s not easy bein’ green, as Kermit the Frog likes to sing. Although the lyrics of Kermit’s song doesn’t make sense in this context but, like I wrote earlier, no one promised logic and this post would marry and live happily ever after.

I got straight A’s in logic and math classes I took in college. Who would have ever guessed that based on my high school grades? Certainly not me, the “stupid one” who couldn’t tie her shoes or tell time until I was well into grammar school. Certainly not me, the dyslexic girl who couldn’t consistently tell her right hand from left until she was old enough to get hot flashes. Certainly not me, the girl who couldn’t sound out words or spell until---well, I still can’t do those things and I’m on the dawn side of my seventies. If it wasn’t for my thirty year old Franklin Language Master 3000 I couldn’t write unless I got one of those voice recognition programs. I’d come to a word I can’t spell and it would be two days before I could figure it out without good old Franklin. He outshines Spell-Check ten times over.

Jeez, I’ve got to end this ode to Franklin before I start plastering his plastic casing with kisses. I’ve been known to do that and he doesn’t like it. He’s a serious dude who doesn’t believe in inter-materials dating. I’m flesh and blood, he’s plastic and precision electronics and I have no logical way to end this weird (?) post, so I’ll just quit typing here.... I take that back. I could end it by promising never to take Franklin for a winter walk around my cul-de-sac, wrapping this ending back to the beginning. That’s how I was taught to write essays back in the same time frame that I learned about the saving grace of wishes not granted. And that reminds me I still have to give closure to my post's hook so here's that literary nugget: It's not always what we do in life that gives us our defining moments, sometimes it's what we don't do---the roads not traveled. ©
Posted by Misadventures of Widowhood at 12:21 AM