Remembering your dreams can drive you nuts trying to figure out where they came from and what they mean. Last night I woke up twice with related but different dreams hanging on. One involved my husband, Don, stealing a wheelchair from McDonald’s and me trying to sneak it back in without anyone noticing. My husband was the most honest person you could meet, so this dream didn’t make any sense. The other dream was longer and more involved but it was basically a common searching-for-something dream with some new twists. Don had insisted on to going into an antique mall and I was struggling to get him and his wheelchair up the front step when a man came along and offered to help. He lifted Don up (without the chair) and deposited him inside the mall and promised he’d deliver the chair around to the back door where, he said, he could get the chair in without any trouble. After throwing the chair in his van, instead of driving around to the back the man disappeared down the street and out of sight. I was panicked, stressed out and I didn’t know what to do. But in the dream, Don took off running down one aisle after another and I spent the rest of the dream trying to find him. I could hear his joy-filled voice, but he was no place in sight.

If you know me at all, you’ll know those dreams sent me to an online dream dictionary where it said: “To dream that you are stealing suggests that you are feeling deprived” and to dream that someone is stealing from you “indicates that you are experiencing an identity crisis or are suffering from some sort of loss in your life.” No shit, Sherlock! I guess a person who was right-side paralyzed and couldn’t talk had a right to feel deprived, even if only by proxy in my dreams. And a widow of a man like that has a right to having an identity crisis and feeling a loss. But who would have guessed your subconscious mind can weave those feelings into such crazy dreams? The second dream with Don running could probably also be interpreted as death freeing him from his disabilities, and me hearing his joyfulness be interpreted as me still feeling connected. Amen to that part of his dying. It’s the silver lining theory at work to those of us who are always looking for them and apparently my subconscious mind likes silver linings as much as my conscious mind does. Who knew!

Changing topics to downsizing the art in my living room. As you can see from the photos below, I’ve got a western theme going---things we bought mostly out west on vacations. When/if I move I want to relocate the western theme to the bedroom to free up the living room to go in a different direction which means I’m hand-wringing over what goes and what I won’t have room to take with me. I know, I know, Glinda the Good Witch from the North would say to start at the being. Or in other words, find a house first and then decide but I’ll bet she’s not a “material girl” like I am so what does she really know about these kinds of first world, widow problems? The pieces all have memories attached and only one print is one I’ve never really liked from day one. The Indian woman smoking was a gift from Don because I like the artist but it depresses me, reminds me of all the health issues smoking causes. The black and white drawing of ‘Holy Eagle’ is my absolute favorite and has been since I first lusted after it. If I ever have to live out of a shopping cart, it will be in there.

Downsizing the others prints will be like kicking out one of your kids. I like them all. Hey, I wonder if I could get them mounded on a ceiling. When I was younger my mom used to say I needed a flip-through setup like they have in art stores to show their prints for sale which would essentially give me surfaces enough to hang 50 things in the space of two foot of wall space. Mom was right. I do love things that require putting nails in the walls. Downsizing on Widowhood Lane is going to be traumatic when the time comes! © 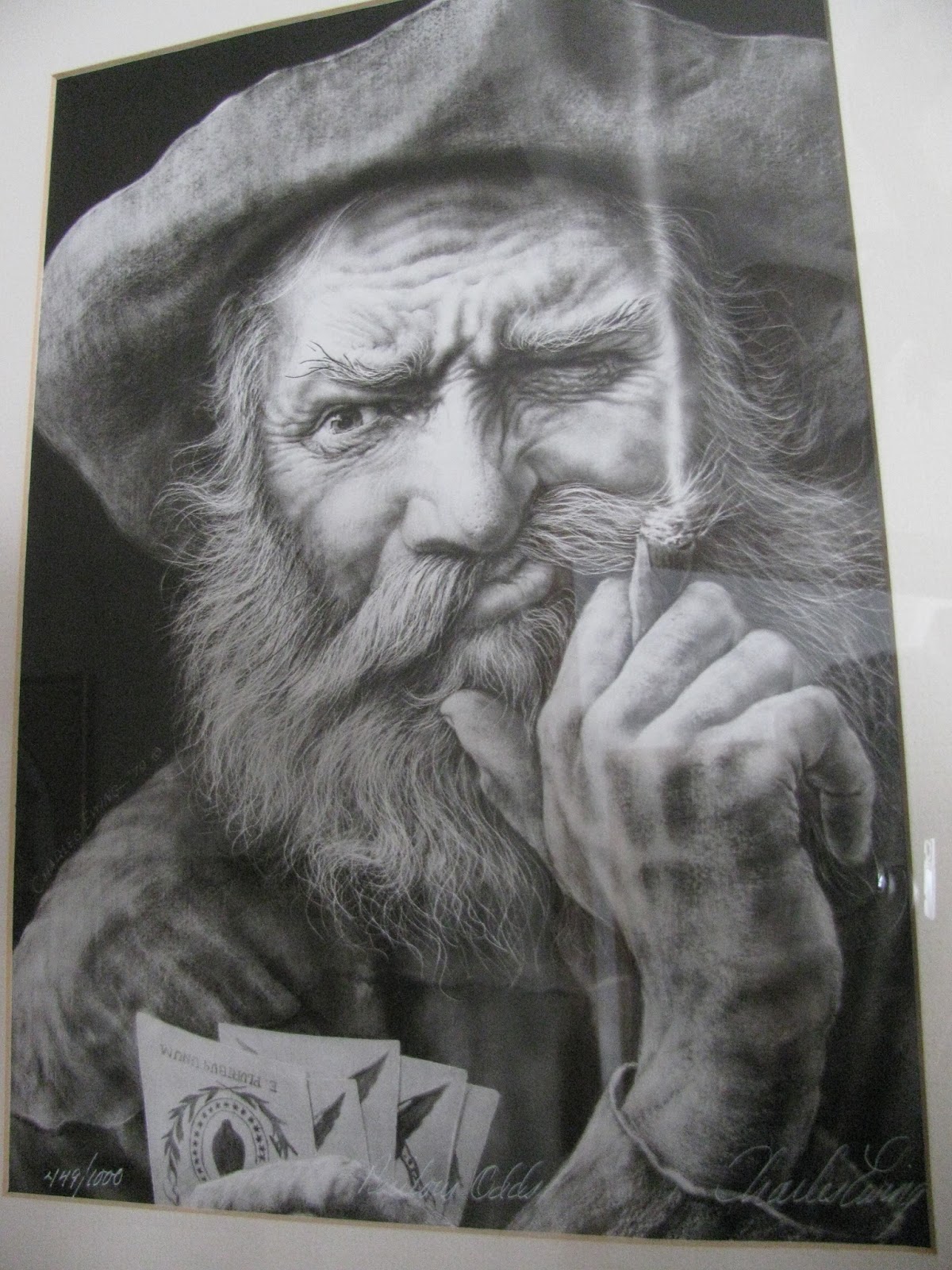 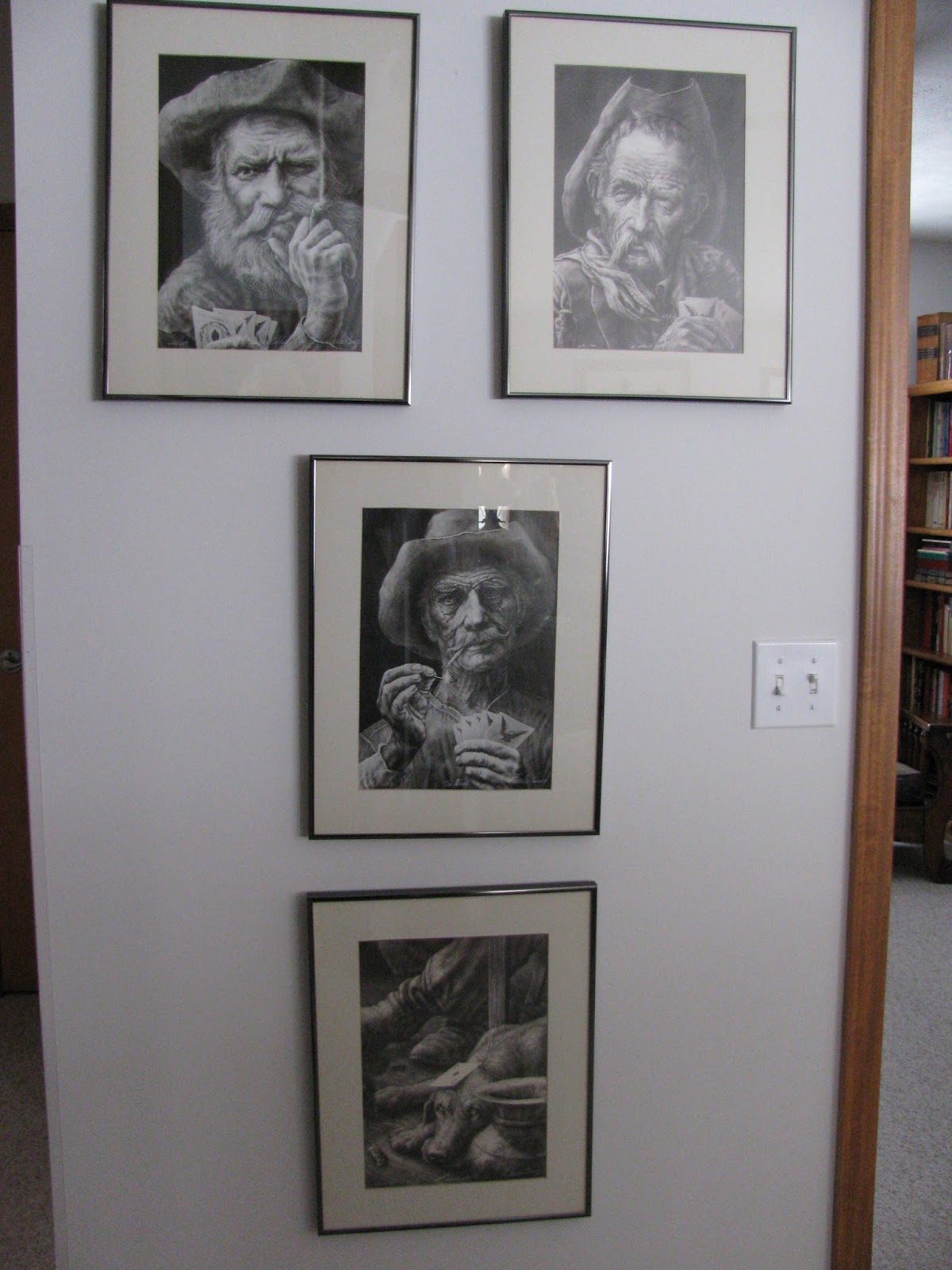 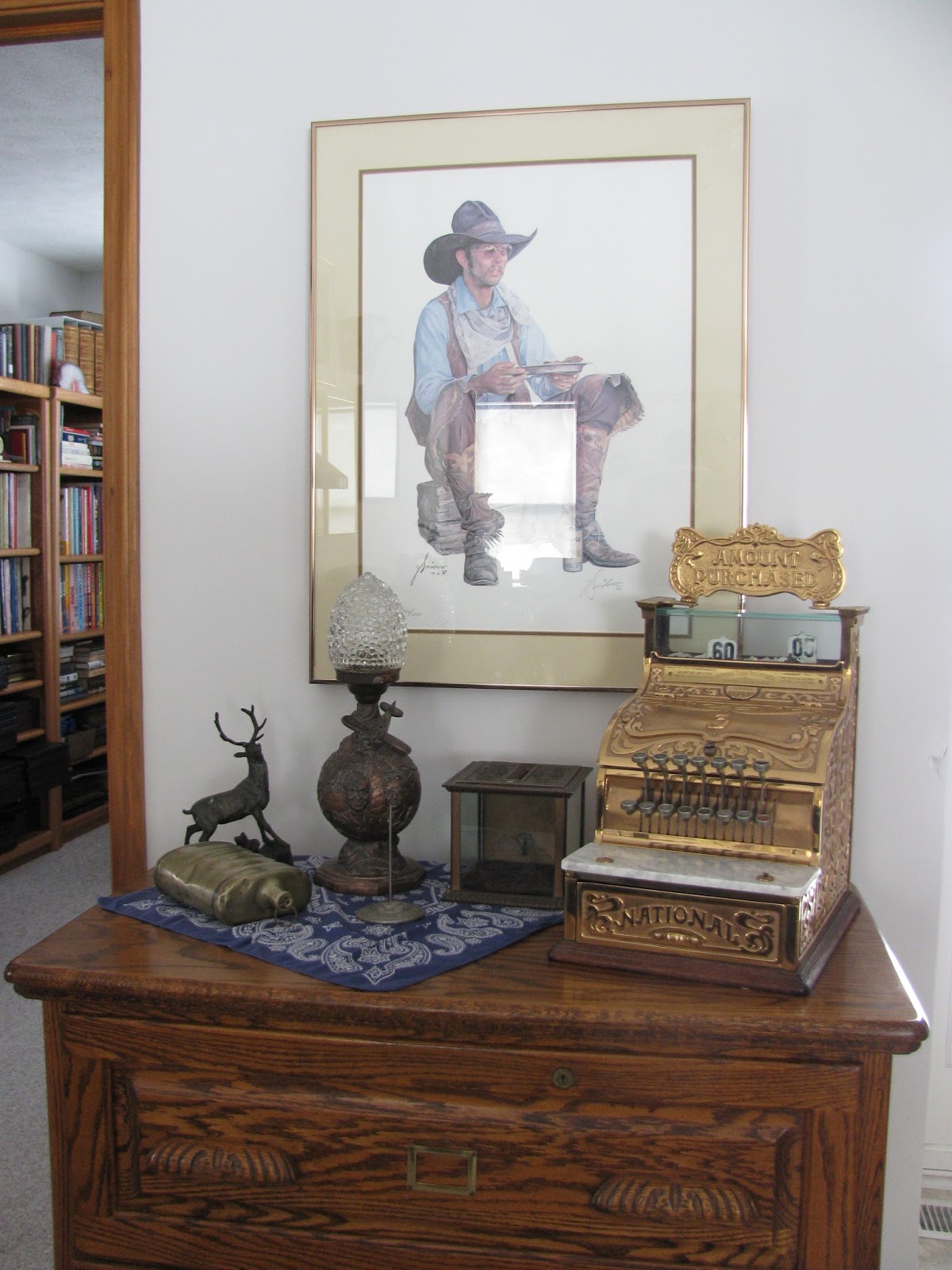 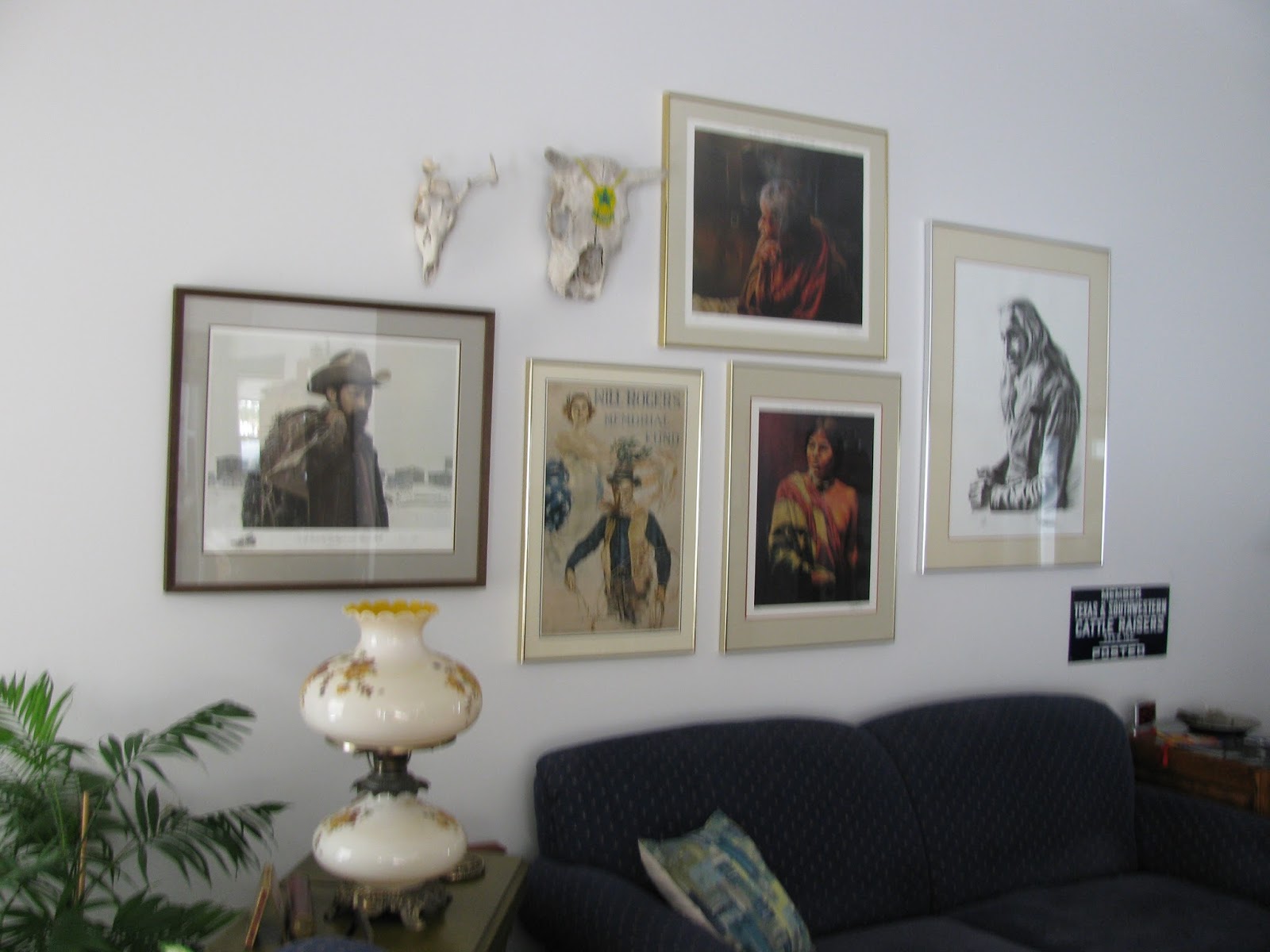 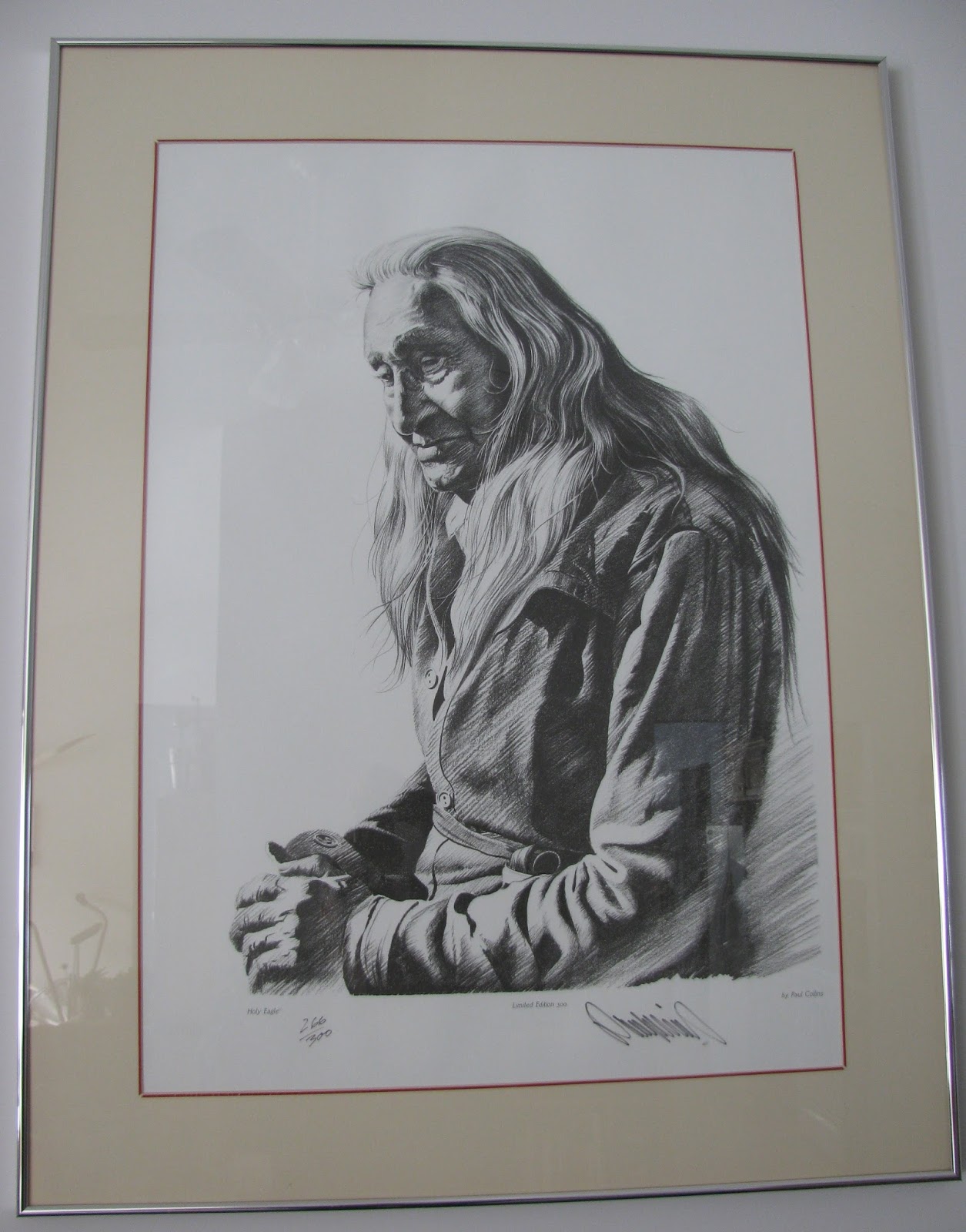 Posted by Misadventures of Widowhood at 12:10 AM