The Farmers Market and Brunch with the Guys 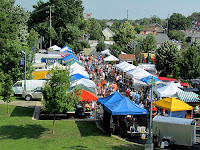 Saturday morning I went to the farmers market for the first time this season and I was disappointed to learn I missed peony season. The elderly “flower guy” at the market said he sold over 4,000 blooms this year including those he sold to event planners. Now, he’s got sunflowers but I didn’t buy any because I forgot to bring a container of water. Boohoo! I especially love having flowers in the house the day after my house cleaner has been here. Going down vendors’ row, I sampled Gouda goat cheese, coffee and cookies and bought cucumbers, red raspberries, lettuce and tomatoes. Then, to feed my carbs-starved side, I bought pretzel rolls and cranberry-walnut bread---mostly for the freezer. I also came home with to-die-for walnut and chocolate bread pudding. I collect bread pudding recipes---over 100 to date---but I’ve never seen it for sale at the farmers market and it was worth every bit of the $4.00 for a four inch square. I almost bought a smoked bone as big as Levi and I would have had I not remembered he had nine teeth pulled last week. He still needs to be on soft, canned dog food until his recheck next week. I hate that stuff! I’m so used to him being a free-feeder with dry food available 24/7 that I’m afraid I’ll forget to feed him.

The farmers market had its usual color---the street performers with their open instruments cases begging people to throw in money, the church ladies selling jam, the librarians pushing summer programs, dogs and baby strollers (plus dogs in strollers), and the venders selling home-made Cracker-Jack, cheese, chocolate, jerky, plants, honey and, of course, every kind of vegetable and fruit grown within a 100 mile radius, which is the rule for calling things “locally grown.” Darn, I just remembered I should have bought some honey! If you eat a little locally harvested honey every day you can build up an immunity to your plant-based allergies. Or so they say. I haven’t tested that theory yet.

After the market I went to the Breakfast Only Café. They only have three tables for a single diner and I was given the one in the far counter where I had a perfect view of all the action. But instead of people-watching I took up eavesdropping and listened to the conversation of four teens sitting within touching distance. They were in town for a basketball tournament and didn’t know each other well, if at all. Nice young guys, three with dreadlocks and wearing uniforms from different parts of the state and one local kid who seemed to be in charge of showing the other three around town. They talked respectfully about teachers, girls, basketball camps, the white-to-black ratio at their schools and some big-wig coach who likes to walk around in his just underpants. They passed around their cell phones to show off photos of the girls they date or like. I'm not exactly sure if you can see a blush on a black kid's face but I'm pretty one of them was doing just that during the 'girl' talk. While sneaking a peek at their cell phone photos, I glances out at the other diners and was instantly jealous of a guy wearing a “Soft Kitty” t-shirt. If you know what that is, you’ll know how silly a non-nerd woman of my age would look wearing one. It’s the only thing holding me back from acquiring one.

On the way home I was listening to a NPR Public Radio talk show and they were discussing how the Jewish community is starting to speak out against the hatred towards Muslims in America. The Jewish guest said, “If the Holocaust taught us anything it taught us that if we don’t stand up against hatred of other ethnic or religious groups then sooner or later that hatred is going to come after you.” Isn’t that a basket full of words to think about. They also talked about the Muslims who took up a sizable collection to help rebuild the black church that burned down last week. Building bridges with love and respect, they said. “Na Na Na Na, Na Na Na Na, Hey Hey-ey Goodbye.” If you saw the news this week, you’ll understand that reference and why it fits into a discussion of building bridges with love and respect in America. But I digress.

Changing Topics: The first batch of nine things I brought to the online auction house closed this week. They sold for probably half of what I’d have gotten on e-Bay. But it’s so much easier and quicker than e-Bay that I can live with that. My next batch of 38 items will close on Wednesday which should tell me more. That first batch was live over the 4th of July so that may have had a negative effect on the bidding. If not, I’ll still have to e-Bay a few of the higher ticket stuff.

The coming week will be a busy one. It includes seeing the King Tut Exhibit in town, taking the dog back to the vet, going to a Write and Share Meetup, taking another load to the auction house, going with my niece to find the rest of our ancestors’ grave sites and meeting with my Movie and Lunch Club. ©

Posted by Misadventures of Widowhood at 12:07 AM