The Holiday Random Act of Kindness 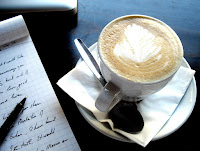 Friday morning, the 3rd of July, I went to the blood lab to get my thyroid re-checked but they were closed. Then I went to the township offices to pay my summer taxes. Closed. Third stop: a new real estate office, opened by the guy who walked us through the building process when we moved here in 2001. Closed. At the bank I tried to see the investment guy but he took the day off. I was batting zero. My bad. No scratch that phrase. I hate it. I should have known all the natives would be leaving town the day before Independence Day. Then I went to Lowe’s knowing nothing short of a hurricane, forest fire or flood would close their doors so close to a holiday known for backyard warrior projects among those of us left behind in the city. I scored some patio stones and half price geraniums.

Then I took myself out to an early lunch at an actual sit-down and eat restaurant. No drive-through this time. I was in the mood to be a lady of leisure. I sat with my back to the wall doing my best imitation of Hemingway as I jotted notes about my fellow diners. Straight in front of me in my section was a table of four teens showing off the tiny charms in their Origami Owl necklaces. What a great way to lure guys to within kissing distance. I made a mental note to wear mine more often. To my right side was a sad looking guy with a big belly and a vacant stare, and next to him was an older couple who didn’t speak much. When the guy in the couple finally did I figured out why they weren’t conversing in public. He had one of those voice boxes that makes you sound like R2D2, the astromech droid from Star Wars. It was loud and caught everyone’s attention. On my left side was a young, dejected looking mother with two children under three who sat alone while her husband was outside talking on the phone. To his credit, just after they placed their order and before he left to use the phone he kissed her on the lips. A sweet, I-love-you-babe kind of kiss. Still, I felt sorry for her.

It’s the kind of restaurant that leaves the check on the table when they bring the food---my kind of service because waiting for bills churns up childhood feelings of being made to stay at the table until bedtime if I hadn’t cleaned my plate which happened on Thursday liver nights and when ever my mother cooked orange vegetables. When I finished eating at the restaurant I moved my plate to the side, on top of the check, and when I went to get it the dishes and the check were gone. I flagged down a waitress and I told her that whoever took my dishes away also took the check with them. Off she went to look for my bill. She couldn’t find it and by then another waitress got in the act to help her look. Finally, a third waitress came over and told the rest of us that my bill was paid by another customer. I was so shocked that all I could say was, “What? Why would anyone do that? Wow!” I might be articulate in print but in real-life situations, not so much.

“Because,” the waitress replied, “There are some really nice people in the world.” And with that my lips puckered up and tears rolled down my cheeks. Jeez! The waitresses all took off like roaches under a light, fearing, I’m sure, that I'd start sobbing out loud.

As I drove home I kicked myself for not telling the waitress to thank my benefactor if she sees him or her again. I hadn’t spoken to any of the other customers or even so much as exchanged eye contact or smiles. It was a mystery. I figured it wasn’t the table of teens who paid for my breakfast or the mother with the babies. R2S2 had his back to me so I eliminated him and his wife. That left the sad guy with the pot belly who caused me to cry. Or maybe it was someone from another section all together.

Those tears came completely by surprise and made me wonder if I wasn’t more lonely and alone than I would have guessed, had I thought about my state of mind earlier in the day. Long holiday weekends, after all, are hard on most widows. Regardless of what brought the tears on it was the second time this year I’ve been the recipient of a random act of kindness. That means one of two things: 1) I do, indeed live in a good neighborhood or 2) I look so pathetic out in public that others think I need cheering up. My money is on choice number one…though there is a third possibility that just occurred to me. Maybe one of my fellow diners actually thought I could be a budding Hemingway and he/she just wanted to give me something colorful to write about. ©
Posted by Misadventures of Widowhood at 12:14 AM