Trip to Archaeology Heaven and Hell in the Same Week

The tomb of Egypt’s King Tutankhamun is said to be the most famous discovery in the history of archaeology and our senior hall organized an outing to tour an exhibit of over 1,000 of the more important findings inside his tomb. Not the actual items but rather life-sized, reconstructed and exact reproductions. (The real McCoy’s don’t tour anymore.) The over-the-top opulence of the stuff the Boy King intended to take with him to the Underworld was overwhelming. But no one could see this exhibit without admiring the skillful craftsmen and artisans (both past and present) who created these objects. The coolest thing was when they turned on the lights in a room set up to look exactly like it did when the archaeologist broke through a wall into the first room of the tomb and a voice-over read the words he wrote in his journal about the experienced. Howard Carter was a good writer and artist and a meticulous documentarian and hearing his words sent chills up my spine. We heard them again in the next room, where everyone took in an audible breath when a golden coffin was illuminated….well, one of them. He was found inside a set of golden coffins and boxes, one inside of another like gilded nesting dolls.

Carter had been looking for this tomb for years, in an area considered to have been completely excavated and taped out, but centuries of sandstorms had covered it over, putting the Boy King’s tomb many stories below the surface. He also got lost in history because a king who came to power shortly after his death (in 1341 B.C.) destroyed all records of the boy in a dispute over which gods to worship. Centuries went by and debris from building later pyramids covered over the entryway to Tut’s tomb. Now, he’s the best known pharaoh of them all which just goes to show that it might take a while for the universe to right itself from evil acts, but it always does in the end.

The discovery of King Tut’s intact tomb in 1922 influenced the final resting places of many upper class people back in that time frame. There’s even a small pyramid in the cemetery where my grandparents are buried---the one I went to last week---and there are many lion statues guarding the entries of other personal mausoleums in the same cemetery. The Tut discovery’s influence was wide-spread. As they pulled more and more artifacts to the surface, the world went crazy reviving the Egypt style arts, textiles and jewelry. Just this past weekend I mined a 1920’s era Egypt-style necklace out of my garage. Funny how everything we do connects.

This past week I did an archaeology-style dig of my own. Instead of century’s worth of sand storms to dig through, I only had to open up the row of metal cabinets in my garage. When we moved in over a decade ago I shoved boxes of stuff in the cabinets and thinking it was mostly Don’s stuff, I hadn’t looked inside those plastic boxes since. So imagine my surprise when I found a jewelry box that was full of three dozen pairs of earrings that came straight off my dresser top before we moved. At first I thought I shouldn’t even open that jewelry box, just put it in a box marked ‘donate’ or ‘auction’ and move on. That would have been a pat-myself-on-the-back moment if I could have done it, but I couldn’t. Eventually it did ended up in the auction box but not before I took out a dozen pair and replaced those with a dozen pair from the jewelry box in my bedroom. Am I on a downsizing roll, or what!

I did find another surprise in the cabinets, a tent that we thought got stolen during the move. It was inside an Army duffel bag that I assumed was full of Don’s uniform. My cabinet ‘dig’ in downsizing hell is not finished by any stretch of the imagination. But what gets me is how on the drive home from the auction house, this week, I caught myself dreaming about something I could buy with my new-found money. What the heck is wrong with me! I need a smaller house with less stuff not newer, different stuff.

Howard Carter was convinced there was a crypt for a young King Tut, despite the fact that his name had been expunged from all official documents and everyone else thought the Valley of the Kings had already given up all its treasures. He spent years unsuccessfully digging before his painstaking research paid off and he found archaeology heaven---the best preserved royal tomb ever discovered. Me? I wish I knew his secret for keeping yours eyes on the prize. I’m guessing it has to do with believing in yourself and your abilities. Will someone cross-stitch that on a pillow for me? I need to stay in archeology hell this summer but too often I have the attention span of a nit.  ©

NOTE: The photo at the top are a couple of the "nesting boxes" aka gold gilded caskets that the King's embalmed body was inside. The photo below was more of the "nesting boxes (my term, not theirs) and the above caskets were inside of here. If I'm remembering it right, there were five carved to fit the body and four square boxes. This photo below makes it look smaller than it was. It was probably 9 feet tall. 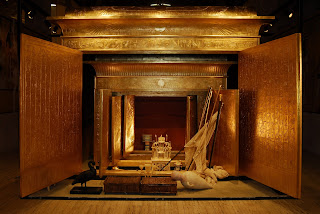 Posted by Misadventures of Widowhood at 8:02 PM