I have a love/hate relationship with the third week in month because that when all my reoccurring social functions take place. I like doing the things I do but I’d like them more if they were spread out over the month and it makes me feel guilty leaving the dog home alone so much. I wish I could find him a day care near-by. He never pees, poops or destroys anything when he’s alone and we’re far enough away from the neighbors that, they say, they can’t hear him bark at passing rabbits. Still….

This week my busy social calendar started early---on Saturday when my Red Hat Society chapter met at a Mexican restaurant for lunch in a town about a half hour west. The place has a reputation for having wonderfully authentic food but we planned to walk over to a Celtic Festival in the park afterward so I didn’t order what I really wanted because their serving sizes are too large and I hate wasting food. At 82 degrees it was too hot to leave a take-out box in a car. So while everyone else was eating taco salads in eatable bowls and leaving half of them behind to end up in the trash, I had a hamburger. Boohoo! At least a child in a third world country won’t starve to death because I didn’t clean my plate.

The Celtic Festival was probably similar to others across the country featuring things like: Irish road bowling, highland dancers, bagpiper and drum bands, whiskey and beer tastings, field hurling, fiddle contests, soda bread and scones stands, and men walking around wearing plaid kilts. Oh, my! Not so common, I suppose, was the parade, a carnival midway, a craft show, a pig roast and classes to teach people how to do the Irish jig. I’m a go-along-to-get-along kind of person so I tagged after my Red Hat sisters as they made their way along the craft show vendors, then I broke loose to check out some of the other stuff on my own. It occurred to me on the way home that I never said a word as I wandered off and that was rather rude and aloof on my part. The other side of my brain, however, reminded me that this was the first Red Hat walk-about we’d been on where we didn’t carpool so I wasn’t obligated to stick like Velcro to anyone. Still, I shouldn’t have wandered off and left without saying goodbye. I can’t believe I did that!

I also can’t believe that the bus driver for our senior hall bus trip on Tuesday was wearing an olive green ‘utility kilt’ and he wore it well, let me tell you. I sat next to him at lunch and found out he used to play a fiddle in an Irish band and he got hooked on the comfort of kilts. When he was out of earshot I said to one of the other guys at the table, “You’d have to have a lot of confidence to wear a kilt out and about.” He rolled his eyes and replied, “You won’t find me wearing one!”

The day trip was to one of six state run fish hatcheries which is located near Wolf Lake which doesn’t tell you much since there are at least three Wolf Lakes in Michigan. This time of the year their program is focused on Sturgeon but they hatch Walleye, Chinook Salmon, steelhead trout and Muskellunge in other seasons. We saw over two million fingerlings (tiny fish) waiting to grow up enough to relocate into our waters with a survival rate of only10%. We were told that’s a much higher percentage than for fish eggs hatched in the wild.

We watched a movie of workers on a boat gathering Sturgeon to harvest their eggs in the wild by giving the water an electric shock which we were assured doesn’t hurt them. The dazed fish float to the top, the workers net them in and “milk” the females for their eggs, the males for their sperm before they are released back in their natural habitat. I asked how they can tell the females from the males and the guide said, "We squeeze them and see what comes out." The eggs and sperm are mixed together in pails with a feather because they’re fragile---one ‘mating pair’ per pail and the pails are brought to the hatchery where the Sturgeon eggs undergo a year long process. The work that goes into protecting eggs and fingerlings from diseases was mind boggling. The best part of the tour was feeding the 12 to 24 inch long fish in the outdoor holding ponds. They’d swish up the water so much you’d think there were monsters down there and now I’m hungry for a fish dinner.

Our DNR website says: “There are more than 11,000 inland lakes 5 acres in size or larger, in Michigan. According to the Michigan Historical Society, one is never more than 6 miles from an inland lake or more than 85 miles from one of the Great Lakes.” We also have 36,000 miles of rivers and streams. Leaving my house I can’t go in any direction without driving past a lake and that’s not even counting the one at the end of my block or the river I have to cross to get anywhere. No wonder I have a fear of sliding off an icy winter road and dying in a submerged vehicle. I carry a handy-dandy window breaking and seat belt cutting tool in my car that’s designed specifically for under water emergencies. I’m a regular little Boy Scout who has two more interesting adventures lined up this week. ©

Note: The photo up above are of fish eggs in the early stages of being hatched. Below, is an aerial of the 75 acre hatchery and that little pinkish speck in front of the middle building is a truck. The last photo is of a utility kilt exactly like the one our bus driver wore. If you don't think a guy can look sexy in a skirt/kilt you'd be wrong. He accessorized it with a rough leather belt with pouches, sandals and tight t-shirt. 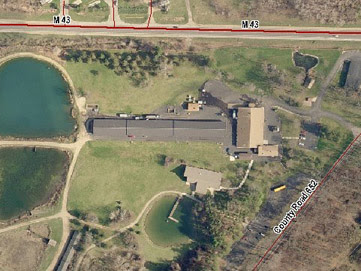