The Dog Days of Summer

According to dictionary.com the phrase ‘the dog days of summer’ is defined as, “The sultry part of the summer, supposed to occur during the period that Sirius, the Dog Star, rises at the same time as the sun: now often reckoned from July 3 to August 11. A period marked by lethargy, inactivity, or indolence.” I didn’t know there is a ‘dog star’ or that the phrase originated in the area around the Mediterranean Sea but I sure have gotten a taste of the dog days of summer. The weather here in Michigan has been hot and humid and the senior hall has been closed for their two week annual maintenance so my social life has been non-existence except for a Red Hat Society tea where I got some sad news, marking the end of a mini era in my life.

The chapter has decided to change its meeting location. I’ll no longer have an excuse to go twice a month to a quaint little tourist town near-by. No more popping into the cemetery once in a while to check on my husband's stone or drive past the land where his family farm stood before a tornado wiped them out. No more impromptu walks along the river where I used to take Don after his stroke. No more taking a frozen yogurt down to the park where his memorial brick is part of the walkway to where I sit to watch the swans above the dam and the fly fishermen below. No more grabbing a Starbucks drink on the way upstairs to the community room of a grocery store where the Red Hatters met or picking up a rotisserie chicken on my way back down. The new meeting place is closer to me (only four-five miles) which will be nice in the winter but we are meeting in the community room of a brand new assisted living facility. The powers that be think the new location is “cleaner and quieter” and they will service us free cookies and beverages. In return, our chapter will open our membership up to any of the ladies living in the facility who want to join.

Call me selfish but I’d rather not spend time around an assisted living facility before I actually need to live in one. I want to bury my head in the sand and pretend life is just a bowl of proverbial cherries---beautiful, sweet and lasting longer than the sultry days of summer. Oh, well, I learned a long time ago that what I want and what I get are not conjoined twins. But I see complications coming. For example this weekend our chapter is going to an out-of-town Celtic Festival and if we take new members off site who among us will to be responsible for their safety? Been there, done that. Don’t want to do it again. And if they don’t go on our monthly walk-abouts what’s the point of them being in our group? Our bi-monthly teas are just planning and gossip sessions. Our first meeting at the new location doesn’t start until September so I’ll have one more bittersweet day at the tourist town to soak up the warmth and closeness I feel to my husband when I go to the place where he grew up.

The dog days of summer are a good time to catch up on that pile of unread books. I have a large pile but instead of picking up one of those books, Jojo Moyes’ After You jumped into my grocery cart. It’s the sequel to one of my favorite books, Me Before You. If you read that book you’ll remember Louisa who was the caregiver to a quadriplegic named Will. They fell in love but at the end he went to a clinic to get an assisted suicide. I’m only on page eighty of After You but already Louisa has fallen off a roof and lived to tell about, joined a grief support group and met a paramedic that the back cover claims “might be the one man who will be able to understand her.” It also says the book is, “funny, poignant, romantic---a deeply emotional, surprising novel that asks, How do you move on after losing the person you loved? How do you build a life worth living?” Oh, boy! I hope the book delivers answers to those questions that so many of us widows ask.

Did you know there’s a song titled, The Dog Days are Over? There’s only one line in the whole song that I like and I REALLY like it: “Happiness hit her like a train on a track.” I remember feeling that way more than a few times in my life. But usually happiness is more a quiet sort, an acknowledgment when you get up in the morning that life is good. The train track sort of happiness, for me, came with special occasions like the time my husband threw me a surprise birthday party. He rented my cousin’s entire restaurant, invited our families and friends and he hired a skinny, bald headed senior citizen stripper/entertainer who had on so many layers of clothing that by the time he got down to his long-johns we were all laughing hysterically. At one point I remember calling out, “Does your cardiologist approve of what you’re doing?” His grandson got him into the business but we didn’t get to see him strip. Grandpa was too old to drive so the grandson was just his driver that day.

John Barrymore of Hollywood fame once wrote, “Happiness often sneaks in through a door you didn't know you left open.” And that, dear friends, is probably why summer time is a promising time to find happiness. We go places, do things, see people and we wake up some mornings to find that we forgot to close the doors before going to bed---literally and metaphorically. We have to be open to new beginnings even when we have to be dragged over the thresholds of change. ©

NOTE: The photo below is of the planter on my deck railing just outside my window near my computer. I’ve discovered the miracle of Miracle Gro. That planter has never looks so good. Usually by the dog days of summer it peters out and I have to take it down. 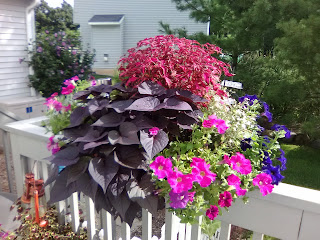