A Hike in the Woods 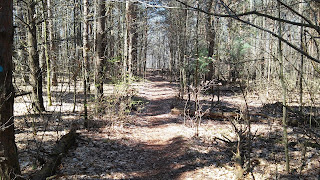 I got an unexpected workout over the weekend when a friendly acquaintance I had chatted with on Facebook recently asked me if I wanted to go on a photo safari with her. She’s working on putting together a chapbook of her poetry and needed some illustrations and all I knew about our destinations was we’d be looking for trees, boats, boat houses, churches and a few other things that didn’t sound like they’d take us too far off mowed grass and asphalt. Our first stop, however, was at a near-by Nature Preserve that has as its goal to preserve 63 acres of a rare sphagnum bog and a mature oak-hickory forest and remnants of an oak barrens. I had no idea what an ‘oak barrens’ was until I got home and my friend Google directed me to the Michigan Natural Features Inventory where it was explained that an “oak barrens is a fire-dependent savanna type [forest] dominated by oaks, having between 5 and 60% canopy, with or without a shrub layer.”

We were naïve hikers. We had no idea where or how far the trail went---it could have gone to the Upper Peninsula and we’d still be on it. We only knew the posted rules of “don’t dos” at the trail’s beginning. We didn’t take our water bottles or cell phones and no one in the world---including Ms. Poetry’s husband---knew where we were going so getting lost was not an option in this place where we didn’t see another living creature save for one squirrel. Seriously, how can anyone get lost when six inch blue dots mark a tree every 500 (?) feet, up and down and around the hilly terrain? I wasn’t too worried; I was wearing my 5-Star Emergency Responder that tracks me by GPS so I knew we could get connected to the state police, if necessary. I did start worrying about that possibly, though, when the trail dead-ended at a place where we had to make a decision between going right or left, not knowing which trail will take us back around to the car and which one would take us to the bog we didn’t even know existed until the next day.

It was near that point on our hike when I had to pee but I didn’t have a Kleenex on me and if I had it wouldn’t have been fun packing out a used Kleenex without a plastic bag to put it in. That list of posted rules was quite specific about leaving paper goods behind and I have a healthy respect of the Gods of Rules. So I decided to take a change that my brain was getting a faulty signal from my bladder---happens sometimes---and I kept my pants pulled up. As it turned out, it was a good decision even though it was well over a half hour before we found our way out of the woods. At one point the trail seemed to disappear entirely but at the same time we could see glimpses of the backs of the cottages along the lake. We made a decision to traipse through what looked like poison ivy to me but Ms. Poetry said wasn’t and we headed for the road we knew would be along the front of the cottages. Soon after, we found a friendly man to point us in the direction of where our car was parked at the trail’s entrance and from the humorous tone in his voice, I’m quite sure we weren’t the first ones to chance cutting through private property to freedom---Castle Doctrine and all.

Hunger, thirst and a bathroom call brought us to a tavern out in the boondocks where Ms. Poetry used to go with colleagues when she taught school in the area. She warned me that it’s a dive but I’ve been in far worse. It’s the kind of place where locals hang out to play pool, watch a football game and get an order of frog legs or broasted bass. The woman’s restroom was labeled an eye-rolling “Her-Pees.” When we arrived there was a line of motorcycles out front and when we left they were still there.

We didn’t lack for conversation while waiting for the slow service and as usual for my area of the world, she brought up the topic of religion. On the spot I decided, I’m not hiding from this woman! I straight out told Ms. Poetry that I don’t go to church which I haven’t uttering out loud since my late twenties. I gave her the CliffsNotes version of how I came to be churchless in the City of Churches ending with, “I believe there are many paths to God” to which she replied something like, “I would strongly disagree with that.” Okay, I thought, she seems be open-minded on Facebook so maybe she just wants to discuss theology. I didn’t mean for it to happen, but my voice got a tad icy when I answered that we’d have to agree to disagree on that point and just like that we went on to another topic as if the exchange never happen. Daring to be vulnerable, who knew I could do that so late in life?

All and all I had a good time on a beautiful day, even though neither one of us thought we’d be spending so much time hiking in the woods. And even though it was totally out of character for me to hike without being Boy Scout prepared with a fanny pack of supplies. At least I wasn’t wearing glorified flip-flops like Ms. Poetry was! I wouldn’t want to be her if she gets poison ivy. Flip-flops or not, the outing was a hike in the direction of turning acquaintances into possible friends. ©

Photo Note: The controlled burns in oak barrens are done to reduce invasive species and stimulate the germination of native fauna. We saw signs of burning everywhere and we thought it was from vandalism or a lightening strike. This burning, I learned the next day, took place last spring in the preserve where we hiked. 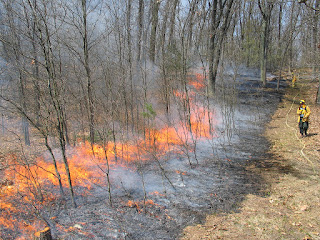 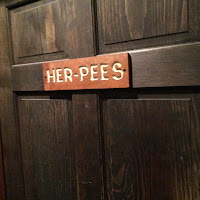