From Dogs and X-cons to Light Bulbs 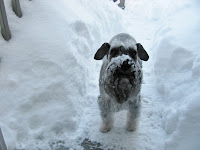 The day after a city has dug itself out after a snowstorm and a bright sun has turned the white landscape into sparkling crystals you can’t help smiling. All the postponed errands and canceled appointments go back on the table, we’re out and about and happy about that. Yesterday I dropped Levi off at the Canine Foo-Foo Beauty Parlor, then I took myself out for a western omelet with an English muffin and orange marmalade. I ask for a takeout box right away and put half the omelet inside before I’ve had my first bite. Out of sight, out of mind because old habits die hard---if it stayed on the plate I’d keep eating beyond what it takes to satisfy my hunger. My check came to just under ten dollars and I left a three dollar tip. It doesn’t matter if the check comes to six or sixteen dollars, I leave the same three dollars. Basing a tip on how much you eat seems stupid to me. The waitress comes to the table the same number of times to take and deliver an order, to refill coffee and leave the check. Once in a while I’ll add a fourth dollar if I’m sitting next to someone from the Lunch and Movie Club who just leaves a dollar behind for the waitress to split with her busboy.

My favorite place to have omelets always has a couple of heavily tattoo busboys and/or cooks. Arms, hands, necks and faces tattooed everywhere. It’s a local, three restaurant chain and I've been going to the chain for over thirty-five years. My husband and I suspected that they hire right out of an x-prisoners-needing-jobs catalog. Years ago it was the only place that was open all night long and we’d go there to get our coffee thermos filled during the night or to get breakfast at dawn when our lots were all plowed. The place was just down the street from the police station and the officers were doing the same thing so it didn’t take long to get over the fear of being around scary looking, inked-up guys who knew how to cook and clear tables but seemed not to know how to talk to customers. They remind me of a line from Shawshank Redemption when a newly paroled guy was bagging groceries and asked, “Permission to piss, boss” and the grocer replied that he doesn’t have to ask to use the bathroom and the x-con thinks but doesn’t say out loud, Forty years I been asking permission to piss. I can't squeeze a drop without say-so.

I have no discipline what so ever today. Here it is 1:00 in the afternoon and I still haven’t had breakfast or gotten dressed. But my keyboard is hot from being on the computer since nine this morning. Don’t get alarmed. My not getting dressed isn’t an old-lady-loses-interest-in-life thing. I come from a long line of bathrobe dwellers. That’s my story and I’m sticking to it. I did manage to feed the dog and give him fresh water. Levi's too mouthy for me to ignore in the morning. Thanks goodness for that or he’d look like one of those malnourished dogs in a Humane Society ad campaign to get donations.

John Grogan, author of Marley and Me wrote near the end of the book: “A person can learn a lot from a dog, even a loopy one like ours. Marley taught me about living each day with unbridled exuberance and joy, about seizing the moment and following your heart. He taught me to appreciate the simple things---a walk in the woods, a fresh snowfall, a nap in a shaft of winter sunlight. And as he grew old and achy, he taught me about optimism in the face of adversity. Mostly, he taught me about friendship and selflessness and, above all else, unwavering loyalty.”

Clearly, Levi has taught me many of the same things but he’s also taught me that barking in front of the cupboard where I keep his Milk-Bone Trail Mix is as annoying as a kid beating on a drum. He’s taught me that barking at cats, rabbits and other dogs all require a different pitch of intensity and that when someone comes to the front door it requires a combination of excited yipping  and tail chasing. Even if a tattooed x-con came was standing on the other side of the glass, Levi would happily welcome him or her into his circle of people to judge by their actions and not their looks.

The day I dropped Levi off at the groomers I still had a couple of hours to kill before I could pick him back up again, so after my omelet I went to Lowe’s in search of a full spectrum light bulb. They say they are good for wintertime depression and since I’ve been doing a couple of hours of knitting every evening, I thought I could kill two birds with one stone…err with one light bulb. While looked up and down the row of bulbs I ran into something called a C-Sleep light bulb. They are Bluetooth enabled to work with an app on your phone that helps you change the bulb between three settings, one of which is supposed to set you up for a sleep cycle before bedtime. I didn’t buy one but I went home thinking that the world is getting too complicated. Can you imagine spending forty years in prison and coming out to all the new devices and app tricks we have now? Heck, I’m still bummed out that we can’t get telephone directories with white and yellow page sections anymore. ©

Photo Above: That's Levi after having fun digging in the snow.
Posted by Misadventures of Widowhood at 2:03 AM