Knit, Purl and Families Coming Together 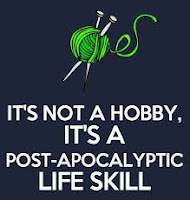 Santa Claus showed up at our family Christmas Eve party for the first time in many decades. The oldest of our five babies is two-and-a-half and none of them were too sure if the stranger in red could be trusted. As it turned out it was a great night for driving---no snow, ice, rain or fog---but my niece and her husband still insisted they drive me all the way home. I had wanted them to just take me to the south end of town where the expressway lights start and I’d drive myself the rest of the way by myself, but it was two against one. I felt a little guilty, but it gave me a chance to show them some of the vintage stuff from my childhood I had brought up from the basement last summer and painted. They both love antiques which is a good recipe for a show-and-tell session. But I regretted that I didn’t show them the half-finished bias knit architectural shawl I’ve been working on. It’s the most complicated pattern I’ve ever worked and Stephanie Pearl-McPhee—a crafter with a blog and a book---says, “A half-finished shawl left on the coffee table isn't a mess; it's an object of art.”

When I was looking for something to write about for this post-Christmas entry I bemoaned the fact that other than the family party and a last minute invitation for Christmas dinner with my brother and his lady friend, I haven’t been doing anything worthy of writing about except for knitting and who wants to hear about a gray-haired old woman spending her evenings knitting? At least I don’t sit in the stereotypical rocking chair, holding a cat while I work on my shawl, and did I mention I’m alternating that project with making hats on a loom? I had to make a hat because I broke the zipper in my winter coat forcing me to buy a new coat that none of my old scarves and hats matched. The only hat I could find in the store that went with the new burgundy coat was $18 and I wasn’t going to pay that much when I could buy a skein of yarn on sale for under three bucks. After that first hat was finished I made a child’s hat with the left over yarn and then I decided that I’ll get an early start on making a hat for everyone in my family for the 2017 party. Twenty-seven in all when I include the three new babies on the way. My mom used to make everyone hats for Christmas year-after-year and I’ll bet my showing up with a box of hats will bring back some good memories for more than just me.

Stephanie Pearl-McPhee also wrote: “It is a peculiarity of knitters that they chronically underestimate the amount of time it takes to knit something. Birthday on Saturday? No problem. Socks are small. Never mind that the average sock knit out of sock-weight yarn contains about 17,000 stitches. Never mind that you need two of them. (That's 34,000 stitches, for anybody keeping track.)” I’ve never made socks, but if we get into a trade war with China, we could all be working a pair in a spare time.

After reading the quote above, I did some math on the bias shawl I’m working on.  When finished it will be a total of 663,000 stitches and that’s not counting all the times I’ve had to rip out a few rows and redo them because I forgot to do the increases or decreases that are supposed to happen every other row. Stephanie also says, “In the nineteenth century, knitting was prescribed to women as a cure for nervousness and hysteria. Many new knitters find this sort of hard to believe because, until you get good at it, knitting seems to cause those ailments.” She says a lot of things that ring true like: “...knitters just can't watch TV without doing something else. Knitters just can't wait in line, knitters just can't sit waiting at the doctor's office. Knitters need knitting to add a layer of interest in other, less constructive ways.” I agree with that second layer of interest. I can’t sit in a chair and just watch TV but I haven’t passed that threshold yet where I knit in public. Even though knitting has become cool again, I’m still hung up with a child’s embarrassment of having my mom knit in public.

Traditions come in many forms from mothers who teach their daughters how to knit to old family recipes that show up at holiday parties. In the spirit of Christmas we accept new members into the fold who introduce us to their birth family’s favorites like rainbow fudge. We accept that a few people can’t be with us. We coo over the bright-eyed new babies and lovingly retell stories about those who have died. Families are a lot like knitting a scarf. You can make mistakes and start over again, add layers of color and texture, you can increase and decrease its size. And with all this “knitting” a family does to keep itself together year after year, like a scarf made on two needles that effort keeps us warm in the winds of time. ©
Posted by Misadventures of Widowhood at 12:30 AM