The G20 Summit and Garden Parties 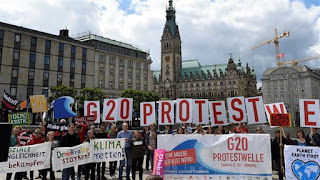 The Washington Post, this week ran an article that began: “President Trump and key global leaders are on a collision course ahead of the Group of 20 summit in Germany this week, with Trump's unapologetic ‘America First’ mantra on trade and climate change running into emboldened, and increasingly united, opposition overseas.” The article goes to make a case for and concludes that, “Trump is attempting to leverage the United States' economic power to negotiate new deals in the country's favor, while foreign leaders appear increasingly ready to bypass the United States in favor of stronger ties elsewhere.” Trump’s self-centered attitude may have worked while he was building his gold-leafed empire where he spent his entire life sorting people into winner/loser columns. But others in the global community are seeking ways to make everyone into winners, where ‘compromise’ has not become a dirty word. The bottom line is we are no longer the leader of the free world---a direct bi-product of his nationalism---and that’s not just my opinion.

The leader of North Korea and Trump have their nationalism in common. Sweet. Two bullies at the O.K. Corral each thinking the more phallic symbols they flash in public the more likely they can get the other to run and hide like a scared little girl peeking out from behind her mother’s skirt. I saw a nuclear physicist this week on TV and he said North Korea is two years away from being able to put an intercontinental missile over the U.S.A. that could take out all our electrical grids and even less time until they can reach Alaska and Seattle with a nuclear war head. I swear to God my first thought was, I need to get some survival gear! As if I could survive without electricity---especially in the winter---with just a camp stove to heat up a can of soup and a toilet composting bucket kit to pee in. Without the sewer pumping stations operating, our bathrooms would be a yucky mess with all that raw sewage backing up. Can you tell I took a tour of our sewage processing plant and know their emergency backup system can only run so long?

Worse yet, if North Korea hit certain places in Alaska with a nuclear war head, the heat from that could melt ice masses starting a chain reaction that would flood many of the coastal countries in the northern hemisphere. And having all that salt-free water from the melting ice dumped into the salt-water seas all at once would intensify our gulf streams where our weather patterns are born bringing on another ice age at a highly accelerated rate measured in months, not years. Hey, Mexico, can you take in some refugees from your neighbors to the north? During the TV discussion someone on the panel of intellects was asked why North Korea hates us so much and the answer was because they’ve seen us involved in our endless wars in the Middle East, toppling leaders, and they believe we want to do the same with them and that’s why Trump’s tough rhetoric is escalating tensions. Just today in Warsaw he said, “I don’t want to talk about what I have planned for North Korea but I have some pretty severe things we’re thinking about.” That makes me feel so much better, Mr. President of the Pissing Contest Society.

In a surreal twisting of my inner thoughts and my outward activities, I went to a lovely garden party this week where my Red Hat Society chapter partied on sangria and more desserts than salads. We sat around in our red hats like the old woman in the poem who ate “only bread and pickles for a week and hoards pens and pencils and beermats and things in boxes.” That poem inspired the birth of the Red Hat Society, a global organization with over 20,000 chapters so don’t let anyone tell you our creative and earnest voices don’t have power. (If we care about something, we need to speak up! Thus the political rant up above.) When Jenny Joseph wrote, “When I am an old woman I shall wear purple with a red hat which doesn’t go, and doesn’t suit me” she had no idea she was inspiring a segment of society to free themselves from the roles and constrains assigned to us by the era in which we came of age.

As much as I like the concept of the Red Hat society I don’t see it as having sustainability beyond my generation. Younger women who didn’t spend their entire lives as homemakers, who have opportunities for self-fulfillment that were denied to their grandmothers, don’t have the same incentives to cut loose from rules and party on wearing colors that don’t go together and don’t suit them. Though I dearly wish we had some younger women wanting to join, preferably younger women who love to drive and have SUVs for carpooling. I was going to add a self-deprecating remark here about my self-centered wish putting me in the same kiddie pool as our president but I changed my mind because only one of us could have a senior moment and launch the nuclear codes, thinking it’s just a super-sized tweet. ©
Posted by Misadventures of Widowhood at 12:30 AM