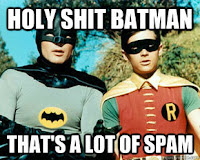 When a moderated comment on this blog shows up on my dashboard there are three buttons I can click on: Publish, Delete and Spam. I’m always scared I’m going to delete something by mistake because those buttons are close together and you can’t undo that action. The comments that get moved over to the spam folder/page can be undone by opening up that page, selecting a comment and clicking on its ‘Not Spam’ button. A couple of times when my brain went out to lunch without me I accidentally missed the mark and clicked where I didn’t mean to click. When it happened I posted an acknowledgment, fessing up to deleting someone’s words and tried to sum up what was said. “Big Deal! You owned up to your mistake." Who said that in my head? Mom, Dad or the Good Fairy in the blue dress?
When I look through my spam folder, once in a great while I’ll find something that should have been published. It only happens to readers who post anonymously. Some bloggers don’t allow anonymous comments on their blogs because it cuts way down on the advertisements and the pure junk that comes along. (I’ve learned over time that using ‘sex’ in a title line can get me spam ads for porn, penis pumps and pills for God knows what.) But I still allow anonymous comments because I’ve cyber-met some of my favorite followers that way. I, do, however really appreciate it when people leaving anonymous comments include their first names with their words. Sorting out which anonymous comments should get published and which are fake can get tricky at times and a name helps. My rule of thumb is this: It must be apparent that someone has actually read the post they’ve left the comment on and they haven’t included an email address or a link to a place that’s selling something.

An August post I wrote titled, Love Letters and Those that Aren’t brought in an unusually high number of questionable comments---thirteen to be exact---and I still can’t figure out why. Most didn’t pass my rule of thumb test but a few still have me scratching my head. Here’s a sample:

“What you said makes a lot of sense. But think about this. Suppose you typed a catchier title? I am not saying your content is not solid but what if you added a headline that makes people desire more? I mean “Love Letters and Those that Aren’t” is kind of boring. You might want to glance at Yahoo’s front page and watch how they create news titles to grab people to click. You might add a video or a related picture of two to get people interested about everything you’ve written. It might make your posts a little livelier.”

I can’t tell you how long I studied that anonymous comment trying to decide if it was sincere or if Yahoo News actually sends out bots to leave comments like that to drive up their click counter. It also crossed my mind that there was hidden coding in with the words that would blow up my blog if I published the comment. There was a coding icon in it that I’d never seen before, a black square with a question mark in the center. If you have a blog and you have gotten a similar comment involving Yahoo or if you know what that black square is all about, please let me know! Curiosity might not kill me like it did the mythical cat, but I don’t like unsolved mysteries.

I do get my fair share of comments telling me how to improve my blog. My favorite was posted on the above ‘Letters’ blog entry and it said, “You have too much text and not enough pictures.” Short insults apparently are the best. If I had published that one I would have been tempted to do tit-for-tat and reply: “I’m not writing a blog for preschoolers” although a part of me says it’s a fair criticism. Another comment on the same blog entry said, “Can you tell us more about this? I want more details.” That’s it, not another word. Anyone who has read that post knows it wasn’t a how-to article on writing love letters. It was written memoir style and I’d already beat the details to death. I finally decided the commenter didn’t pass the rule of thumb rule but for what purpose would someone leave a comment like that? Another head scratcher. Ohmygod, maybe I should check my spam folder for lice. Every time I go there I’m scratching my head!

All this over sharing of my spam is to illustrate how, on rare occasions, a legitimate comment that comes from an anonymous poster gets accidentally sent off to Spam Land. It happens when I've marked one too many boxes on down the line then clicked on the ‘Spam’ button and off they went in bulk. Gone until I’m bored enough to read my spam folder in the middle of the night. Sorry, Leze, who splits her time between England and New York, I just found your comment about expensive bras and bathing suits, left on my post about getting a bra fitting. But on the good side, it gave me a topic to write about and I thank you for that and hopefully for understanding how your comment erroneously ended up in Spam Land. ©
Posted by Misadventures of Widowhood at 12:30 AM