Cards, Cows and Another Year Under my Belt 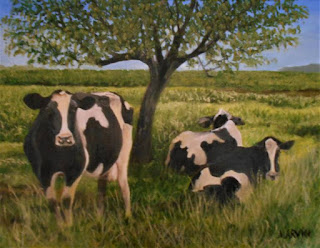 Christmas has come and gone and not to brag but I got some nice comments written in cards that came in the mail. One of them said: “I really enjoy reading your Christmas letters. You have such a great sense of humor. I think you should have been a writer for a comedy show.” Instead of taking the compliment for what it was I thought about calling Allen on the phone and joking, “What’s with the SHOULD have been? I AM a comedy writer, I just have an exclusive audience limited to the names on my holiday card list.”

Allen went on to say, “I always have great memories of the New Year’s Days we spent with your family. Your dad was so friendly, always a smile. I remember him doing magic tricks…” Yup, my dad was that guy who pulled quarters out from behind little ears and did magic tricks with cards to entertain himself and our friends. I tried to learn a few---and he was a patient teacher---but my sleight of hand moves were more like crawling up the rungs on a ladder. They got me where I needed to go but no one would mistake my moves for “smooth.” If there had been videos back then mine would have been labeled how-NOT to do False Cuts, Double Lifts and Pinky Breaks. My brother, on the other hand, did master the hide the quarter trick. I saw him do it with his two year old great-grand son recently. Not sure he’d fool anyone over ten years old but by that age if a kid knows how the trick is done they’re smart enough to keep quiet about it so they can keep collecting those quarters.

Allen’s mom and dad and mine were life-long friends and I can’t think of New Year’s without remembering the many sleep-overs he and his sister and me and my brother had together on New Year’s Eve when our folks and four of their friends would go off to another place for a house party or out on the town. Then they’d all gather in the morning where we kids stayed the night to cook a huge brunch before taking us kids to the roller rink for the afternoon. That tradition marked over a dozen New Year’s in my life.

When I remember how close my folk’s circle of friends were I have to admit to being jealous. But it was a different era where people were less apt to move out of town, making it easier to nurture life-time friendships. They played cards every month for decades and took vacations together. Allen’s folks and mine also both had cottages on the same lake. Ohmygod, do I dare tell you about the time five or six Holstein cows got out of their field and Allen and I ended up in a tree to get away from them? We were up there so long that he had to poop. Yup, he did it, hung his bare butt over the branch of the tree and dropped his "little logs” down to the ground to the delight of the cows who all took turns smelling what fell from the sky. I thought we’d die up there in the tree but eventually as cows apparently all do, they did go home at milking time.

So now you know the backstory on why I love my vintage De Laval advertising tin cows that are grazing on top of the doorway molding in my kitchen. For years I had to walk past a cow pasture on summer days to get to the grocery store where we spent our magic-trick quarters on ice cream cones and I was very brave so long as the cows were behind their electric fence. But after that day in the tree I swear the cows knew us and a few would come greet us and walk the length of the pasture with us from their side of the fence. In the animal kingdom when you’ve smelled another creature’s poop it means sometime and wouldn’t we all like to know that they were thinking. It probably went something like: “Hey, there’s that kid who eats Wheaties and bananas for breakfast and loves drinking our milk!” Allen ought to count his lucky stars that I didn’t become a comedy writer because I’ve got other stories about him I could exploit for cheap laughs. He was a supporting character in many of my childhood adventures.

Here I am with just New Year’s Eve left to get through in my fifth year of holidays as a widow. And I faired just fine. No ghosts in the house to haunt me with what-ifs, no bad flash-backs or pity parties. And I’m hoping to fill New Year’s Eve with good memories, a little sparkling cider, a few great movies and a small platter of party snacks that won’t make me fat---or fatter I should say, since on January second I start a take-no-prisoners diet that will have me begging for someone to put me out of my misery. ©

* Above - Pastoral Scene Cows Resting, painting by Janette Marvin. Below is my advertising tin cow collection. The three on the left are over a hundred years old. On their backsides they advertise cream separators for farms. 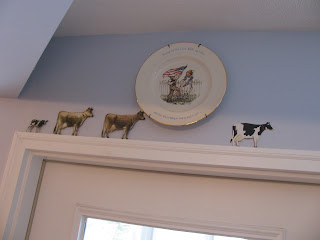