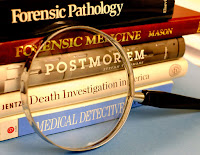 If you’re a fan of CSI type TV shows you would have liked the lecture I went to this week titled, Tales of a Medical Examiner. It was given by a guy who has literally done thousands of autopsies for the county. By law they have to be done whenever a death is unexpected, suspicious, accidental, violent, or no attending physician was present. He views forensic medicine as a way of seeing past the tragedy and focusing on giving answers to families and the community and he went into that branch of medicine, he jokingly said, because they don’t have emergencies in the morgue. We must have a bunch of morbid people down at the senior hall because 165 signed up to see this presentation. The room doesn’t hold that many and it’s rare that we have a waiting list for our Life Appreciation Lecture Series.

He did a question and answer session before bringing on the slide show. Ohmygod! There was nothing remotely shown like you’d see on TV. The first case he talked about was of a guy who’d called the local funeral director and told him to come to his house with a body bag because he was going to kill himself. The funeral director called the police who had a long stand-off with the guy who was waving a gun around, finally it ended with the guy having two bullets in his head. It’s impossible to put two bullets in your own head if the first one goes through brain matter and the forensic examiner had to make sure the bullets were from his own gun and not from the police’s. Imagine a 12 foot wide movie screen filled with close-up pictures of his bloody head. Imagine pictures of his skull cap cut off so they could retrieve the bullets. One bullet went through his chin upward and out his forehead, missing his brain. I couldn’t even tell it was a face for the longest time until I finally located his ear. The next bullet went from the top of his head downward. No one lost their stomach contents viewing those gruesome slides but the mood of the room sure changed as he walked us through the powder burns, suet, various colors of blood and the shapes of entry and exist wounds. If anyone thinking of offing themselves with a gun could see those slides they’d change their mind.

The second case he showed us slides of was a woman, also with a gun shot in the head, but her mouth was duck taped shut. They treated it like a homicide, ran a rape kit, and looked for signs of a struggle---the whole ball of wax. Finding none, it was a true mystery until her diary was discovered where they learned she taped her own mouth shut because she planned on taking a bunch of pills and didn’t want to vomit them back up. The gun was her back up plan. The medical examiner, a guy almost retirement age, said it still amazes him the things people do to themselves and others. Another interesting fact he told was that only 20% of suicides come with notes of explanation.

The third case he talked about was of a woman, found in a bath tub full of water. He said no adult drowns in a bath tub unless something else is going on---drugs, murder, health issues or suicide. It’s never an accident unless it’s a small child who can’t push themselves above the water line. He showed us the autopsy slides of her heart, proving she had a disease that made her heart rhythm beat erratically, long enough for her to slide down in the water and drown. And the moral of that story is never take a bath naked again unless you want to end up with a dozen people coming and going in a potential crime scene. Her bloated naked body was quite a shocking sight.

But the case that was the most shocking in more ways than one was of a 21 year old guy who was high on fentanyl patches. He thought he girlfriend was a zombie and he was going around a neighborhood, punching windows out with his fists, and begging people to get a gun and shoot him. He took a dive off the top of a balcony head first on the cement parking lot below. We got “treated” to a dozen slides of his entire body including three slides of various views of his penis and balls. Up close, full screen. And in case you’re wondering why it’s because they were covered in pinky fingernail sized fentanyl patches. The speaker said people hooked on fentanyl patches get very creative in ways to get the most kick out of their patches. They’ll even soak them in water to get the last drop of drugs out of them, then they’ll draw the water into a syringe and shoot themselves up with it. Fentanyl overdoses drive people to do crazy, crazy things and we’re in the middle of a fentanyl overdose epidemic because it’s coming in cheap from China and it's cut into heroin.

I’ve been to other crime solving type lectures and one that walked us through the steps of how bodies are embalmed. I’m not squeamish but I can honestly say I couldn’t be a forensic pathologist nor would I want to be married to one. “Guess what I did at work today, honey,” is not something I’d like to hear over a dinner table. But what the heck, a free lecture is a free lecture and I rarely turn down an afternoon to learn something new. ©
Posted by Misadventures of Widowhood at 12:02 AM