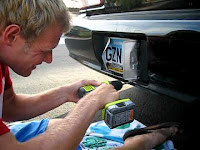 I’ve had nothing on my day planner for six straight days and guess what, the end of this week I have three things scheduled back-to-back. In a perfect world my social life would alternate with days spent at home doing things like catching up with laundry, cleaning forgotten cubbyholes and other boring necessities of living on my own.

One of the necessities I had to do this week was remove the license plate off the car and put a new one on. Here in Michigan they only let you go ten years just using the renewal tabs on old plates before you’re required to buy a whole new plate. And when that happened this year it occurred to me that in my entire life I’ve never had to swap a license plate. Either my dad or Don took on that once-labeled guy job and even with my last few vehicles, when Don was still alive but could no longer do anything that required two hands, we bought new vehicles often enough that the dealership changed the plates. How hard could it be? I am woman. I can do anything!

Except I couldn’t get the screws off. Oil helps I remembered from the good old days but I couldn’t find any Lock-Ease or machine oil in the garage so I found an eye dropper and put some baby oil on the screws. After letting them soak awhile I tried turning them again. I was using a flat head screw driver because I couldn’t find a Phillips head large enough to do the job. I thought about asking a neighbor to turn the screws out because it was a struggle for my old hands with their thumbs that get stuck in positions they don’t belong. I am woman, captain of my own ship. I can do anything. Ya, Sure.

Finally, I got them off but I ended up cracking the license plate holder that I didn’t like anyway. So I put the whole kitten caboodle back on and drove to the auto supply store to get another, one that won’t have me struggling to put the license tabs on in their proper place like I’ve been doing in past years with the old plate holder. I also bought new screws and at home I finished the job. The whole process took me two and a half hours including lunch at Taco Bell. I am woman. I can do anything! Right…but I wish I had thought to play the Aging-Old Woman Card when I was at the auto supply store and sweet-talked one of the guys there into swapping my plates.

But the job wasn’t completely finished because now I had to get rid of the old plate in a manner that someone couldn’t find it in the trash and put it on another vehicle. With my luck the plate thief would kidnap a kid and a witness would report my license number resulting with the swat team storming my front door. My husband had nine vehicles and this was a common worry in April. He’d cut those plates up into a half dozen pieces. I doubt I still have the giant cutters he used and even if I did, I doubt I’d have the hand strength to use them. I thought about asking a neighbor guy if he could cut the plate but I’m sure my neighbors aren’t as paranoia as I am about what could happen if I just threw the plate in the trash. To save my reputation as a mildly sane person I spray painted the front of the plate, folded it in half and wrapped it in Duct tape. I am woman. I can do anything. Yeah!

Speaking of neighbors, a young couple moved in about two years ago. She's a physical therapist---very sweet and friendly. A few weeks ago we talked over our property line about the salsa garden she’s going to put in this summer. Last year was her first attempt at gardening and she said her whole family came over in the fall to help her can her garden’s bounty. I told she that brought back good memories of me and my mom making chili sauce. Long story short I must have said something that made her think I’m the classic, lonely widow on the block. On her next day off she appeared at my front door. I invited her in, gave her the grand tour and during our conversation she said she came over to give me her phone number in case I ever need help with anything, “Yard work. Walk your dog. Anything. I just want to start doing some charity work.” Did you catch that ‘charity work’?

The next week on her day off she called and said, “I wanted to check in on you and see if you'd like to go for a walk with me.” If you remember the first time someone called you Mam in a store instead of Miss you’ll know how I felt. Shocked. Amused. Sad. A half dozen emotions came with that phone call before I settled on thinking it might be nice to have a young woman on a mission living near-by who could be enlisted to help with jobs involving screws that don’t want to come off. I am woman but I’m not invincible. ©

Posted by Misadventures of Widowhood at 12:02 AM