Cooking With Mom and other Curious Memories 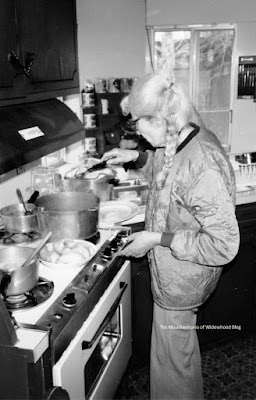 My life is so boring! How boring you ask? Boring enough that the most exciting thing that happened all weekend is I got a new memory foam and mattress pad for my bed. New sheets, too. Wow, aren’t I living high on the hog! And that brings up a little known fact—at least to city dwellers like me: When a mother pig is laying down and her piglets are suckling from the top row of teats they fare better than the piglets who suckle from the bottom row, and there are scientific reasons for that but they all boil down to the piglets on the top are getting more milk. I found that out while trying to research where the expression, ‘living high on the hog’ came from. (Not to be confused with ‘riding high on the hog’ which is an entirely different idiom if you own a HOG aka a Harley Davidson motorcycle.)

Living high on the hog is an expression my mom used when I was growing up and you’d think it was one of those phrases---like so many others we use---that comes from Shakespearean times, but it’s not. The earliest reference that’s been found in print appeared in the New York Times, in March of 1920: “Southern laborers who are ‘eating too high up on the hog’ (pork chops and ham) and American housewives who ‘eat too far back on the beef’ (porterhouse and round steak) are to blame for the continued high cost of living, the American Institute of Meat Packers announced today.” The idiom had its heyday in media the ‘40s and that makes sense that my mom, a young mother and housewife in that time frame, would incorporate the saying into her language bank.

Growing up, my mom had a strange quirk when talking about meat that to this day I can’t ferret out a reason why she did it. When someone asked her what she was cooking or serving for dinner, she’d always say it was an “old dead” chicken or cow or pig. I remember going into a supermarket in my early twenties and standing in front of a meat case, with no idea what the various cuts of meat were called. I knew how to make roast beef if the slab of meat was sitting in front of me but I didn’t know its name to ask the man at the meat counter to give me what I needed. Back in those days meat didn’t come shrink wrapped on Styrofoam trays with convenient labels stating its cut.

Now, it doesn’t matter. My full repertoire of cooking meat is (and has always been) limited to roast beef, grilled steaks, baked chicken, salmon or bacon done in the microwave, thick pork chops cooked in a crock pot, fried hamburger for chili and thin sliced steak or chicken in a stir-fry pan. I’m actually quite surprised my list is as long as I just stated, having spent my entire adult life claiming I can’t cook. More accurately I suppose I should have been saying, “I’m too insecure in the kitchen to trust my cooking enough to invite anyone over.” It didn’t help that back in the day when I actually tried to learn how to cook from my mom, she didn’t make it easy. For example, I loved tapioca pudding growing up and her tapioca always tasted so much richer than mine. One day I went to her house and asked her to make it while I watched. “You just follow the directions on the box!” she insisted. But the problem was, she didn’t. Her tablespoons were heaping, not leveled off like I’d learned to do in high school home-ec class. She also added extra egg whites and more vanilla than the side panel recipe on the box called for and she didn’t even realize she was doing it. (I just remembered something---my mother called ‘tapioca’ fish eyes when I was a kid too young to know better.)

Mom made a lot of soups---good soup---and never used a recipe and I did the watch-and-learn a couple of times trying to root out her secrets. But she never measured the spices or other ingredients she used and she always incorporated left-overs into soups so I never got a single recipe out of my once serious attempt to write down Mom’s recipes. And to this day there was one spice she used in just about everything that I still can’t identify. It looked like baby spiders floating on top when she’d first put it in and growing up that’s the only name I knew it by. "But Mom I've got spiders in my soup!" "Just eat them, they're dead!" I do make a pot of soup every once in a while but I don’t puree or consult recipe books, just like my mother didn’t do. Sometimes my soup is actually pretty good. Other times I know if I could just figure out how to buy those “baby spiders” my soup would be much improved.

My only real claim to fame in the kitchen is at one point in time---the ‘70s and then again in the first decade of this century---I baked a lot of breads. I wanted it to be my signature claim to kitchen fame. There is nothing better than eating homemade sourdough bread with homemade bean and bacon soup and having fish eyes pudding for dessert. Now, that’s living high on the hog in my book. ©

Photo: That's Mom at the cottage, circa mid to late '70s?